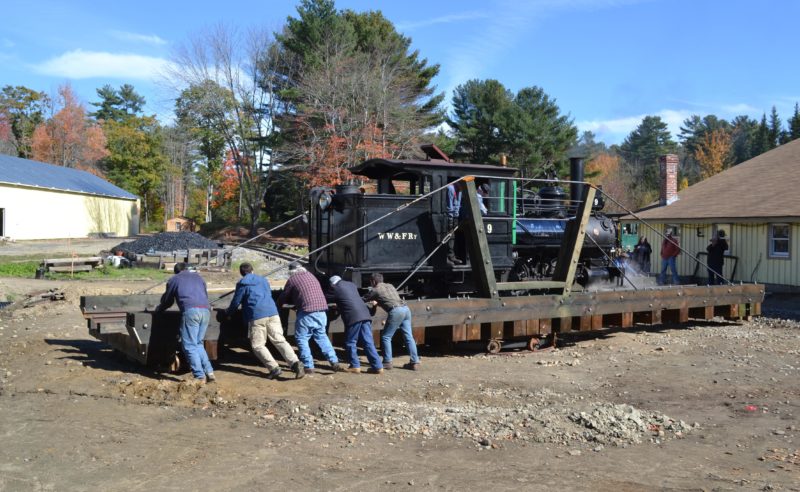 “Heave, ho,” onlookers called out as six volunteers from the Wiscasset, Waterville & Farmington Railway Museum in Alna pushed Engine No. 9 on the museum’s new turntable Saturday, Oct. 15. The turntable, built from an 1894 Portland Co. design, is the latest addition to the museum, which is devoted to the mission of reconstructing Maine’s historic 2-foot narrow-gauge railway line, engineer Jason Lamontagne said.

The turntable, a movable section of rack that allows locomotives and cars to switch direction, is hand-powered. It is the first 2-foot narrow-gauge turntable to be built east of the Mississippi in 100 years, project volunteer Randy Beach said.

The railway, functional from the late 1800s to the early 1930s, had two turntables in operation during its peak – in Wiscasset and in Albion, Lamontagne said. Due to the design, the 9 1/2-ton turntable, carrying a locomotive that weighs about 20 tons, can be operated by as few as four volunteers, Beach said.

“The design alone was a major project,” Lamontagne said.

From a picture of a sketch of the Portland Co. turntable, a railway volunteer in Texas created a blueprint for its construction. The turntable was completed about a week ago as part of the museum’s work weekend, President Steve Zuppa said.

The museum recently celebrated the restoration of Engine No. 9, one of the Portland Co.’s last remaining 2-foot narrow-gauge steam engines. The railway museum now has one of the only operational Portland Co.-designed turntables to allow the locomotive to switch direction or change tracks, Lamontagne said.

Saturday was the second time Engine No. 9 went for a spin on the turntable, Lamontagne said. 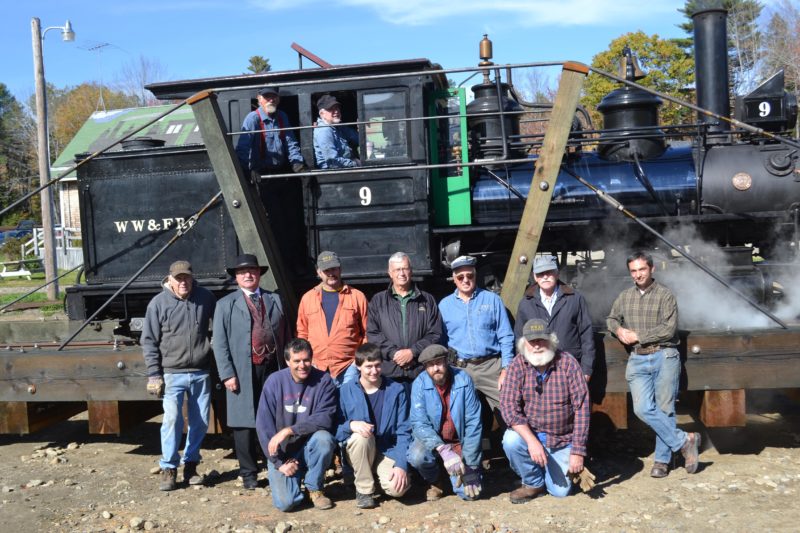 The Wiscasset, Waterville & Farmington Railway Museum is reconstructing the historic railroad line to bring alive for the younger generation the time period when railroads revolutionized commerce and communications, Zuppa has said.

The turntable and railyard visible at the entrance of the museum is a replica of the yard in Wiscasset, which was located in the ball field behind what is now the Wiscasset Elementary School, Lamontagne said. It is believed that the foundation of the turntable is responsible for a brown ring visible in the field during certain seasons, he said.

With the turntable complete, the museum is now focused on other projects to make history operational again, Zuppa said. The museum plans to create additional side tracks that will take railway passengers to the door of the shingle mill and sawmill on the railway line.

The museum plans to add live demonstrations of the work done at the mills to show how the railway connected the products to the market. In addition, the museum is fundraising to replace the boiler in its other steam locomotive, Zuppa said.

The museum also plans to build a three-stall engine house, or roundhouse, which traditionally surrounds a turntable, in the near future, Zuppa said.