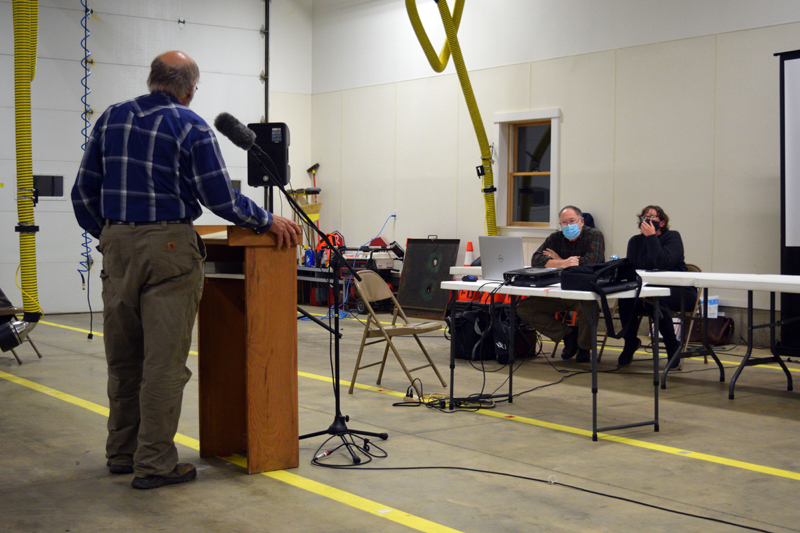 Alna residents accused the board of selectmen of illegally spending town funds on a private road at the board’s regular meeting on Wednesday, Dec. 1.

The Sand Building Road is a private road off Route 218 in Alna used by three homeowners, a land trust, and plow and sand trucks accessing the town’s sand and salt shed.

During the public comment period, Alna Fire Chief Mike Trask asked selectmen when they met to expend $6,100 for the grading of Sand Building Road.

Third Selectman Charlie Culbertson said that he authorized the expenditure for the repair of the road to prepare for the road’s use in the winter.

“Those trucks are bringing salt that (benefits) the entire town. They beat the crap out of that road, it’s inaccessible,” Culbertson said.

Road Commissioner Jeff Verney said Second Selectman Linda Kristan called him to ask if the town could repair the salt shed road and he told her the town could not expend funds on the road because it is private.

“We had meetings on that before you two came in here and we decided that we’re not spending any money on that road,” Verney said.

In an email on Tuesday, Dec. 7, Culbertson said that, to his knowledge, he is the only member of the select board that discussed Sand Building Road with Verney. However, Kristan did not explicitly refute Verney’s claim during the Dec. 1 meeting.

Both selectmen reviewed contractor Evan Holbrook’s invoice for the Sand Building Road work on the selectmen’s weekly warrant they approved a few weeks ago, Culbertson said.

The town paid Holbrook for three separate projects on Sand Building Road. The first is pre-winter road grading for $2,500. The second is the installation of a culvert mid-way down the road for $1,200, 40% of which will be paid for by the road’s residents. The third is a second culvert and re-grading closer to Route 218 for $2,400.

In his email, Culbertson said that the third project was required after heavy rains washed out part of the road recently graded.

The total cost to the town, taking into account cost-sharing, was $5,620.

“We’ve tried to do this year’s pre-winter maintenance … in a way that will ensure winter access for our plow contractor and town residents, while reducing the town’s future maintenance costs for the road, and with a view to the direction it appeared that things were headed when progress stalled on resolving the open issues (with the road),” Culbertson said.

In an email to Culbertson on Sunday, Dec. 5, Baston, a former selectman, said that the town will face a lawsuit if the selectmen do not find a way to recoup the funds they spent on the road.

“Now you have to figure out how to claw back 80% of what you have paid for and return it to the town. Or you will face a lawsuit,” Baston said in his email.

Baston said in a phone interview that while he might not object to Culbertson’s solution to the roadwork, he vehemently objects to the third selectman’s methodology. He said that selectmen cannot spend town money without a vote.

“You don’t just cut a backroom deal with the abutters,” Baston said.

At the Dec. 1 meeting, Culbertson said that he would bring the matter to the town’s legal counsel; however, in an email on Dec. 7 he said that the selectmen would not pursue a legal opinion.

“Currently, there is no reason for us to seek legal guidance on Sand Building Road,” Culbertson said.

In 1985, the town acquired the land for the sand and salt shed, as well as an easement to access it. After the town improved the access way to the shed, other people purchased lots and easements on the road. From that time until 2019, the town paid essentially 100% of the costs of maintaining the road.

In 2019, the Alna Board of Selectmen, then composed of Baston, Melissa Spinney, and Greg Shute, attempted to address to what degree the town should fund repairs of the Sand Building Road after the residents on the road asked the town to pay for additional drainage and culverts.

In an email to the selectmen in September 2019, former town counsel Amanda Meader said that the town paying for the repairs on the Sand Building Road beyond its proportional share “would set a bad precedent.”

“The town can and should contribute to the upkeep of the access road to some extent, although to what extent is open for discussion,” Meader said in the email.

The board proposed that the town pay for 20% of the repairs to the road. However, the board did not bring the issue to the voters at annual town meetings because they were conducted via referendum vote in 2020 and 2021, and the article could not have been debated or amended on the floor, according to Baston.

As a result, the question of the town’s responsibility to fund repairs on the Sand Building Road was never resolved.

In 1989, the Maine Supreme Court determined that, because of constitutional limitations, public funds or equipment may not be used to maintain or plow privately owned roads. This is true even if the public is not prevented by signs or gates from using the road.

However, voters of a town or village corporation may authorize selectmen or assessors to use municipal equipment to maintain and repair public easements within the town.

In a phone interview, Culbertson said since all three of the individual expenditures are below $3,000, the selectmen did not have to bring the expenditure forward at a public meeting.

“Both of those (contracts Holbrook) verbally told us would be under $3,000. Anything over $3,000 obviously we are obliged to go before the town and get permission to spend that kind of money,” he said.

During the Dec. 1 meeting, Culbertson defended the board, arguing that former First Selectman Spinney was supposed to provide the new selectmen with guidance in their new positions.

Spinney responded that the new selectmen asked more of her than was her responsibility as the first selectman.

“The first email I got from you was accusatory, and then the next day (Linda) told me I had to teach her everything and that’s not fair,” Spinney said.

Kristan moved to adjourn the meeting multiple times. Culbertson said that the selectmen received about 50 Freedom of Access Act requests to date, and have been receiving five to six a week to date.

Kathy Zuppa, who served as a member of the Alna Fire Department for 16 years, expressed disappointment in the way that the dialogue between the selectmen and the residents in attendance had devolved.

“I’ve lived in this town for 40 years … this is the first time in all this time that I wish that I could afford to leave this town,” Zuppa said.

The Alna Board of Selectmen will next meet at 6 p.m. Wednesday, Dec. 15, in the town office and on Zoom.

Zoom links and recordings are available at alna.maine.gov.