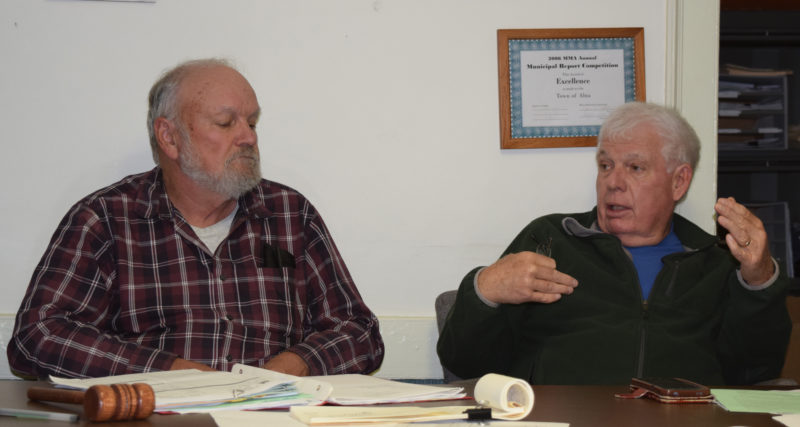 Alna Third Selectman Doug Baston (right) speaks as First Selectman David Abbott looks on during a meeting of the Alna Board of Selectmen at the town office Wednesday, Oct. 25. (J.W. Oliver photo)

The Alna Board of Selectmen expects to receive a citizen’s petition to modify school choice in response to concerns about growing enrollment and possible fraud.

Alna and Westport Island are the only towns in the state to pay tuition, up to a certain amount, for students to attend the private or public school of their family’s choice, according to Alna Third Selectman Doug Baston.

“It’s not free,” Second Selectman Melissa Spinney said during the selectmen’s meeting Wednesday, Oct. 25. “We pay for it. The townspeople pay for it. They don’t realize that.”

While the selectmen do not have any plans to propose a change in school choice, they are hearing from residents about a possible petition drive.

Baston suggested that a modification to restrict school choice to public schools would resolve the issue. “I think it’s going to come from a petition, but I think the three of us agree that it’s a viable fix,” he said.

If the town receives a petition, a vote could take place at the annual town meeting in March 2018 or at another time set by the selectmen.

If the town approves the change, the Sheepscot Valley Regional School Unit Board of Directors and each town in the district would have to approve an amendment to the consolidation agreement between the towns, according to Baston.

Baston does not think the other towns would oppose the change. “Actually, the RSU would save money, so why would they vote against it?” he said.

Any change to school choice would not affect current students, according to the selectmen. “Nobody’s going to get booted out,” Baston said.

While Baston and Spinney specifically expressed concern about school choice as an attraction for young families to move to Alna, First Selectman David Abbott said he objects only to fraud.

“I don’t have a problem with someone moving to town and sending their kids to Juniper Hill,” he said, in reference to the private Juniper Hill School for Place-Based Education on Golden Ridge Road.

Alna has 127 students in pre-kindergarten through grade 12, according to enrollment information on the Sheepscot Valley Regional School Unit website. A breakdown of students by the school they attend includes only 122 students, however.

Of those 122 students, 65 attend public schools and 57 attend private schools.

Of private school students, 15 each attend The Center for Teaching and Learning in Edgecomb and Lincoln Academy in Newcastle, 11 attend Juniper Hill, and the rest are scattered among seven other schools, from Lincoln County to Massachusetts.

The district’s board does not want to expend the resources necessary to investigate allegations of fraud, according to the selectmen.

“It was pretty discouraging,” Baston said.

The cases the selectmen have concerns about fall into three categories, according to Baston.

The second category relates to joint custody, when one parent lives in Alna and the other parent lives in another town. Regardless of where the child actually lives most of the time, the parents claim the child’s primary residence as Alna to take advantage of school choice.

The third category is intentional fraud. Baston believes one case alone has cost the town more than $100,000 in four years of tuition for two children to attend a private school in Massachusetts while the family was falsely claiming to live in Alna.

Baston would like to see criminal prosecution of anyone who intentionally falsifies information to take advantage of school choice.

“I think until somebody is charged with felony theft of public services for falsifying their residency for school purposes, it’s going to keep going on,” he said during the selectmen’s Oct. 11 meeting.

“My experience with some folks is, they consider it a game,” he said.

School choice is “making us an unaffordable community,” Baston said.