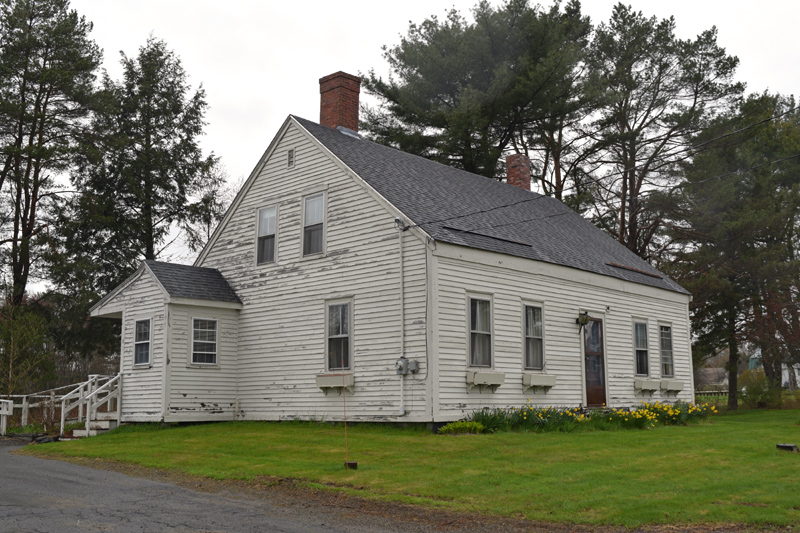 The town of Alna will list its old town office on Route 218 for sale by owner as soon as possible, selectmen say. The asking price is $130,000. (Jessica Clifford photo)

The town of Alna will list the old town office and 2 acres of land for $130,000, for sale by owner, as soon as possible.

According to the town’s website, the building on Route 218 was Alna’s town office from 1998 until April of this year. The new town office, behind the old one, opened April 16.

Second Selectman Doug Baston said he does not know the exact year the old cape was built. “I’ve always heard it is one of the oldest buildings in town,” he said. The building does not have a kitchen.

“I think we should start high and see,” Baston said after First Selectman Melissa Spinney suggested $110,000 as the list price.

In other business during the Alna Board of Selectmen’s meeting Wednesday, May 8, resident Paul Crandall suggested a switch to two tax bills instead of the one that goes out in early to mid-August.

Crandall, a former selectman and town manager in the Down East town of Lubec, said Lubec has done it that way for a few decades.

“To reduce the interest and the money on the (tax anticipation note), I suggest that we go to two tax bills – one June 30, one Dec. 30,” Crandall said.

If the town makes the change, it might need to estimate the portion of the bill for education and the county tax because it would not have those figures when the first bill goes out. “Then, we’d have to true-up in the second bill,” Baston said.

Crandall said Lubec’s town clerk and treasurer could consult with Alna’s town clerk, Liz Brown, about how it works.

Spinney said the town’s auditor, Fred Brewer, from William H. Brewer & Co., does not think it is a good idea to have two tax bills, but she was not sure of his reasoning and needs to ask again.

A warrant for a special town meeting, scheduled for June 12, is in the works. The warrant may have one or two articles, but at this time only one is confirmed, Spinney said.

The first article will ask when voters would like to have taxes due and payable, and what rate of interest will be charged for unpaid taxes.

The selectmen recommend the due date after July 15, at the assessors’ discretion, and 7 percent interest, which will start to accumulate 90 days after the date of the bill.

After the meeting, Baston said the town’s little library, an initiative of the RSU 12 literacy team, has been installed and stocked with books for all ages. The little library is based on a concept of giving a book and taking a book. Each town in RSU 12 will have a little library.

The library is next to the stairs that lead to the front entrance of the new town office.