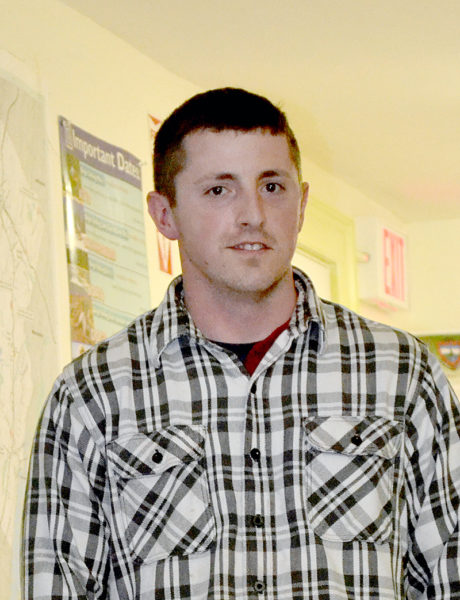 Spencer Bailey announces his write-in campaign for a three-year term on the RSU 12 Board of Directors at the Alna Board of Selectmen’s March 1 meeting. Alna will elect its municipal officials Friday, March 17. (Abigail Adams photo)

Alna voters will decide two long-standing debates at the annual town meeting Saturday, March 18 – whether to approve the modification of the Head Tide Dam and whether to adopt a consumer fireworks ordinance.

Voters will also decide if the town should conduct a revaluation of real estate, something selectmen have discussed for the past year. The revaluation is needed to bring tax appraisals in line with the market value of homes, the Alna Board of Selectmen has said.

If voters approve the revaluation, selectmen are requesting to raise an amount not to exceed $20,000 to add to the balance of the revaluation account to complete the work.

The $20,000 request is one of the few new additions to Alna’s municipal budget in 2017-2018. Another is the Alna Cemetery Trustees’ request for $10,000 to improve the cemetery road and do repairs and maintenance at the cemetery.

After almost two years of debate, the selectmen will present proposed modifications to Head Tide Dam with their recommendation for approval. Voters will decide whether to authorize the selectmen to enter into a contract with the Atlantic Salmon Federation to complete the work.

The proposal calls for the removal and reconstruction of the right abutment of the dam. The modification would remove about 8 percent of the dam to improve fish passage. The proposal also includes enhanced safety and recreation features at the site.

The Atlantic Salmon Federation will fund the project at no cost to the town.

The Atlantic Salmon Federation has worked with the town for the past two years to develop a proposal to improve fish passage at the site. The work was initially met with controversy due to concerns in the community that the intention of the project was to remove the dam, which would violate the dam’s deed covenant.

The initial town committee that formed to work with Atlantic Salmon Federation disbanded and a smaller committee formed to find a solution that would improve fish passage without violating the deed restriction.

The Head Tide Dam Committee unanimously recommended the proposal, which members said meets all of the town’s desired outcomes.

However, selectmen were initially unsure if it would be ready to bring to town meeting, due to negative feelings that may still be lingering in the community about the project.

After a meeting with some of the project’s critics, selectmen voted to present the proposal to voters if the town attorney determined it did not violate the deed restriction. With the legal greenlight, voters will now decide the future of Head Tide Dam.

The planning board was tasked with the ordinance’s development; however, questions about enforcement prevented the completion of the ordinance in time for the 2016 town meeting.

The ordinance to be presented to voters requires a permit for the discharge of fireworks in town and prohibits their use within 300 feet of a school, church, day care, or pasture with livestock.

The permits will be issued primarily by the town office, according to the ordinance. Selectmen will have the ability to appoint additional town officials to issue the permits as well.

The Lincoln County Sheriff’s Office will enforce the ordinance. Violations of the ordinance carry a fine ranging from $100 for a first offense to $500 for a third offense. The penalty for more than three violations will be determined by the selectmen, according to the ordinance.

The fireworks ordinance has also been the subject of debate. Proponents of the ordinance applauded the planning board at a public hearing about the ordinance, which they said will increase fire safety and minimize the impact to livestock from the use of fireworks.

Opponents of the ordinance questioned whether there was a need for one, and took issue with having to obtain a permit to use fireworks. The debate will now go before voters, who will either approve or reject the ordinance.

The open town meeting will take place at the Alna fire station at 10 a.m., Saturday, March 18.

Voters will elect Alna’s municipal officers Friday, March 17. There are no contested elections.

Spencer Bailey has announced his candidacy for a three-year term on the RSU 12 Board of Directors as a write-in candidate.