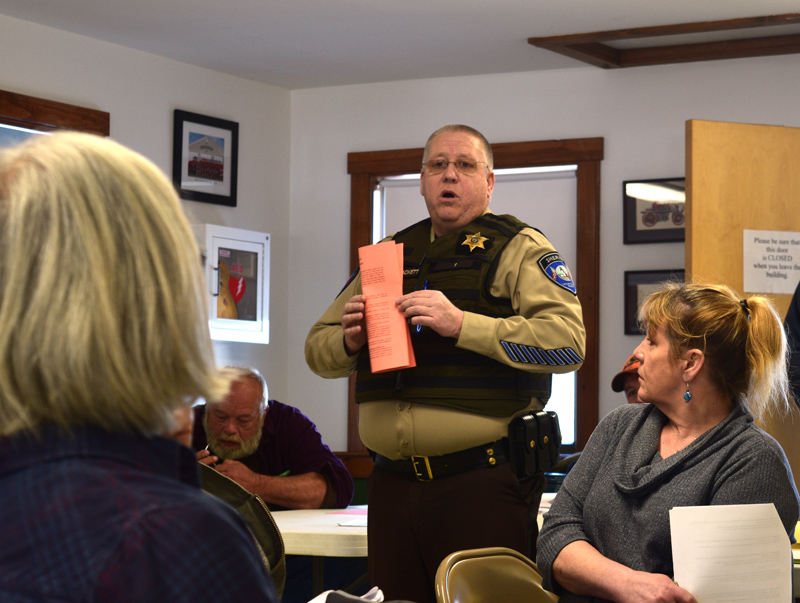 The ordinance sets a yearly limit of two false fire or security alarms and imposes fines for the third and subsequent false alarms. The Lincoln County Sheriff’s Office will enforce the ordinance.

The Alna Board of Selectmen asked Lincoln County Sheriff Todd Brackett  to speak about the purpose of the ordinance.

“The intent of the ordinance is to heighten awareness; it’s to try and get voluntary compliance,” Brackett said. “Our goal here is not to fine folks; our goal here is to get folks who want to have a residential alarm to maintain it … so it’s not a drain on our resources.”

The county cannot pass an ordinance, therefore, each town would have to approve its own. Brackett said he would like to have all Lincoln County towns adopt the ordinance.

“The point of us adopting this is not that it’s a huge problem in Alna, but it’s to start the momentum for the other towns where it is – the towns that have seasonal property – so we offered to be the test case, precisely because we are little and it’s not a big problem,” Third Selectman Doug Baston said.

The LCSO records system would track alarms. The agency’s administrative staff will look at the log each day to see which calls were alarms and which calls for alarms were from a property with previous false alarms. Fines would be mailed.

Brackett said Alna does not necessarily have a problem with false alarms, since it had a total of 16 alarm calls last year.

Residents stated opinions in support of the ordinance, against it, and in the middle. 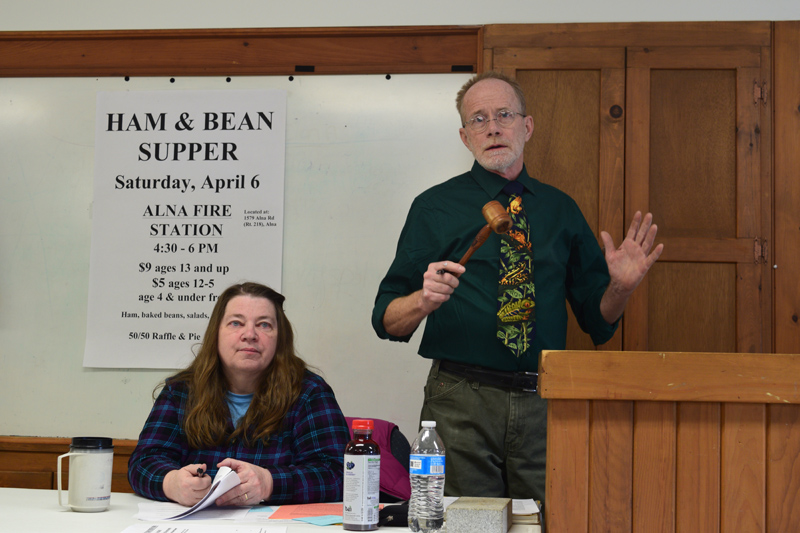 “In terms of being good neighbors to the other towns in Lincoln County, I think we need to pass this,” Fred Bowers said.

The ordinance states that if an alarm user fails to pay a fine, after the exhaustion of appeals, emergency services may decline to respond to alarms at the property.

“I definitely support the spirit of this,” Pentaleri said. “I think what this does, it may not be very likely, but it exposes us to liability. I think the ordinance would be completely effective without that paragraph.”

He said the sheriff’s office already has discretion to prioritize calls, so the language is unnecessary.

“As someone who’s in the medical field and Alna Fire, I hesitate to pass anything that encourages us not to respond,” Jones said. “You need to address every emergency as a real emergency.”

Another resident, Brittney Bardo, asked if the ordinance could be amended. The selectmen said it could not be amended at town meeting.

After about a 35-minute discussion, voters approved the ordinance.

The other ordinance up for approval on the ballot – a local food sovereignty ordinance – was approved without any discussion. 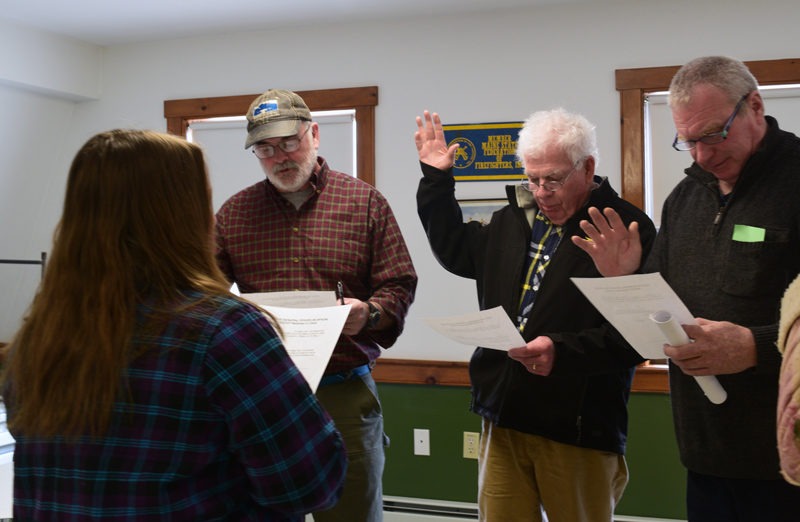 Voters did not pass Article 17, to use the remainder of the North Old Sheepscot Road Reserve Account, as well as a portion of the balance of the General Highway Account, to fund the reclamation and paving of half of Cross Road. It was the only article voted down at the meeting.

Article 17 was contingent on the passage of Article 16, which transferred the balance of the North Old Sheepscot Road Reserve Account to an operating account for use to repair Cross Road.

“Since Article 17 did not pass, the remainder of North Old Sheepscot Road that is not spent on repair will remain in the operating account until further decision is made,” First Selectman Melissa Spinney said in an email after the meeting.

“I think we ought to get another bid before we tackle this project and it would be nice to get enough money to do the whole road and not just half of it,” Verney said.

He said it would be cheaper to fix the whole road, rather than bring equipment in twice.

In October 2018, Hagar Enterprises Inc., of Damariscotta, was the only company to bid on the project.

Earlier in the discussion, Christine Anderson suggested widening the gravel shoulder on Cross Road as part of the project.

“I always thought the thing to do would be to start adding shoulders on the side of the road and if you started doing it as you repaved, slowly, over time, Alna would become a place where people can come and bike,” Anderson said.

Mary Bowers liked Anderson’s suggestion and said the road “really should be safer for pedestrians.” She said Cross Road receives heavy use to bypass Wiscasset traffic during the summer.

Another resident suggested that the board ask for bids with and without a bike lane. 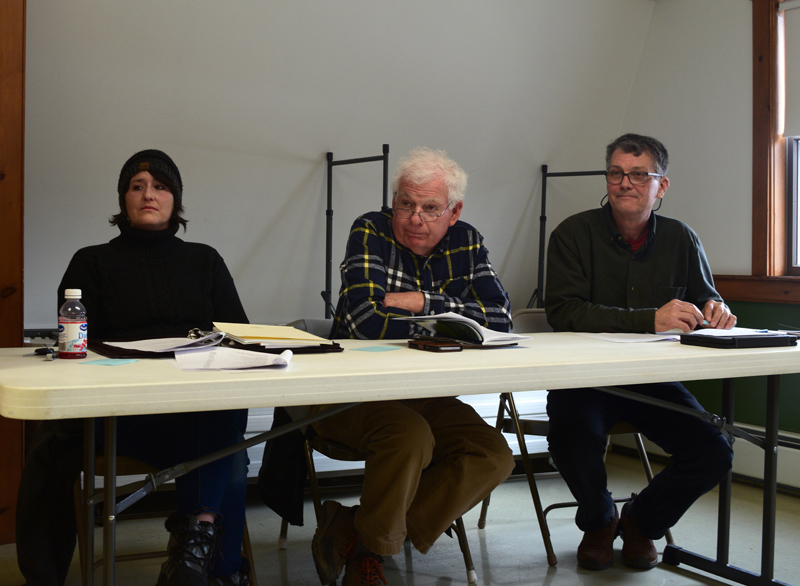 Article 44, to authorize the selectmen to sell the current town office with 2 acres of land and apply the proceeds to reducing the principal on current loans and/or finishing outfitting and improving the new town office and property was amended.

Town Treasurer Amy Warner made a motion to amend the article to set up a new town office reserve account to begin after the 2020 town meeting, where at least 75 percent of proceeds from the old town office will sit and be used in subsequent years for bond payments.

In addition, the select board has authorization to spend up to 25 percent of the proceeds for any remaining work on the new town office and property.

Before amending the article, some residents expressed concern.

“It seems kind of vague. Does it state anywhere how much of it they want to allocate for outfitting and improving?” Jones said.

Spinney said the board would not authorize spending all or close to all of the proceeds on the town office only.

A concern with the amendment was whether there were other loans the town had to pay off.

A total of 68 Alna voters attended the annual town meeting.

Though it is not complete, after town meeting, some residents walked across the street to tour the new town office.