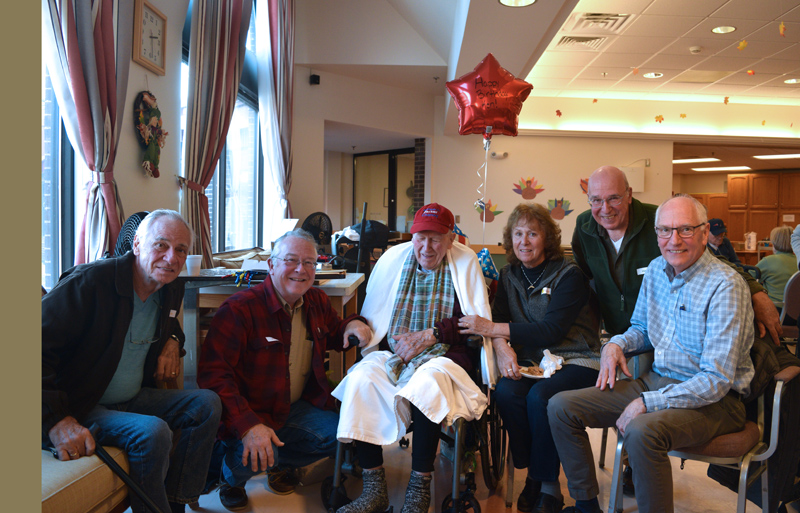 Kenneth Chaney celebrates his birthday with his children at the Maine Veterans’ Home in Augusta on Friday, Nov. 15. From left: Dennis, Michael, and Kenneth Chaney; Nancy Hanna; and Steve and Larry Chaney. (Jessica Clifford photo)

A lot of memories can be made in a century, from serving in the armed forces to finding a passion for bowling to holding positions in town government many people don’t know exist. In 100 years, Kenneth Chaney did it all.

Alna’s oldest resident celebrated his 100th birthday with his five children, relatives, and other residents of the Maine Veterans’ Home in Augusta on his birthday, Friday, Nov. 15.

Kenneth Chaney was born in Wiscasset and grew up mostly in Bath. He attended Morse High School through his sophomore year.

At the age of 16, he became an apprentice at Bath Iron Works, according to daughter-in-law Pat Chaney. 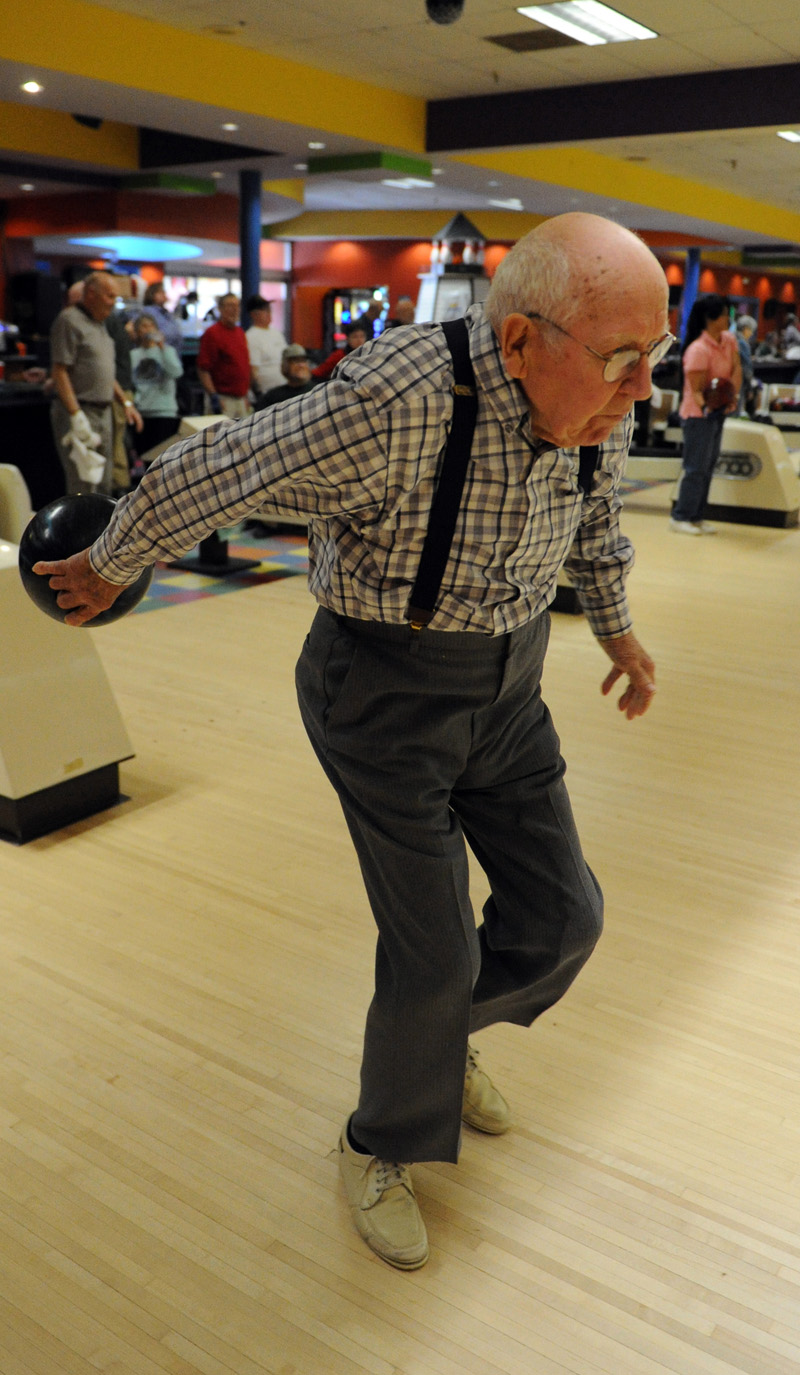 Kenneth Chaney bowled in Brunswick until he was 96. (Paula Roberts photo, LCN file)

He worked as a machinist at BIW until he retired around 1970. Afterward, he worked as a carpenter, building houses, and as a mail carrier in Alna.

His grandfather gifted him property on Golden Ridge Road in Alna, where he raised his children with his wife, Margaret Chaney.

Although Kenneth Chaney did not have to serve during World War II because he worked at BIW, he chose to, Pat Chaney said. He joined the U.S. Navy.

He was supposed to be sent to Okinawa, but there was a mix-up with his records. “Otherwise, he might not be here,” Pat Chaney said.

He served 17 months in the Navy. After training as a motor mechanic, he spent the remainder of his time doing kitchen duty because of his lost paperwork.

While working at BIW in the mid-’60s, Kenneth Chaney joined a bowling league and played at Yankee Lanes in Brunswick.

Nancy Hanna, one of Kenneth Chaney’s children, bowled with her dad twice a week for years.

“When he got to be 90-something, he agreed not to drive to Brunswick if I would take him,” Hanna said.

“I just watched for a couple of years and then he said, ‘You’re not bringing me anymore unless you start bowling,’ so I was forced into it,” she said.

At the age of 96, he retired from bowling because he contracted Lewy Body Dementia. The disease causes a progressive decline in mental abilities, along with physical impacts. He is also blind.

According to a letter from the Alna Board of Selectmen to Kenneth Chaney, he has held nearly every position in town government.

Former Alna First Selectman David Abbott said most people who had the opportunity to work with Kenneth Chaney have passed away.

However, Abbott remembers that Kenneth Chaney was always one of the first to pay his tax bill each year.

For the last 25 years, he has served as surveyor of lumber, wood, and bark, now a ceremonial position in the town.

According to Hanna, he also served as master of the Sheepscot Valley Grange.

The selectmen’s letter states: “The three of us are honored to represent what we are sure are the unanimous sentiments of Alna’s 700 citizens in wishing Ken a very happy 100th birthday.”

His children explained the reason behind his investment in town government. 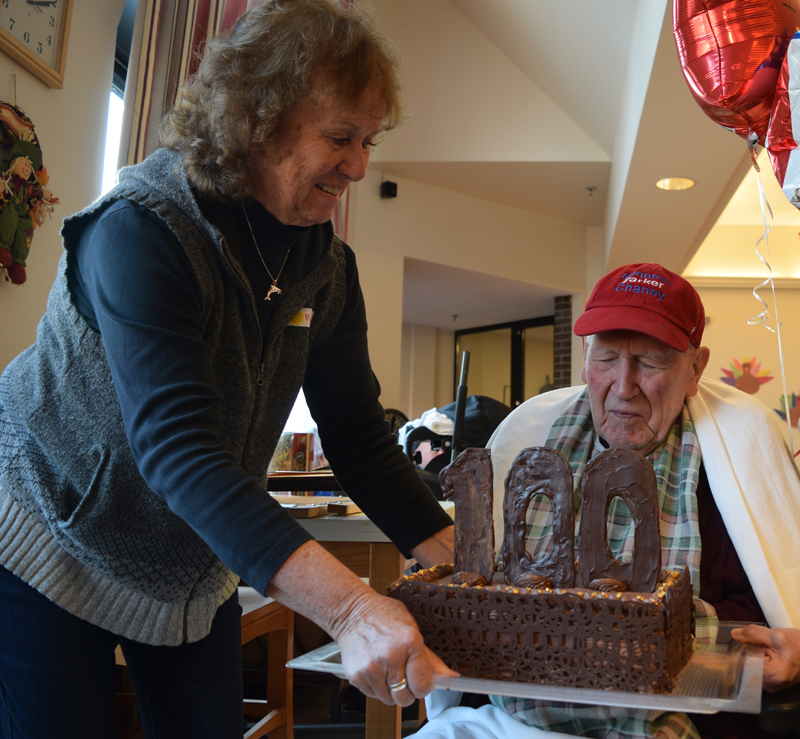 Nancy Hanna brings a 100th birthday cake to her father, Kenneth Chaney, during a celebration at the Maine Veterans’ Home in Augusta on Friday, Nov. 15. (Jessica Clifford photo)

“That’s the way it was back then,” Michael and Steve Chaney said, due to the small number of people who lived in Alna.

Town government was all volunteer work in the ’50s and ’60s, they said.

“There weren’t that many people to share all these jobs,” Steve Chaney said.

Kenneth Chaney has lived at the Maine Veteran’s Home for three years.

Nov. 15 was not only his birthday, but also the home’s celebration for every resident whose birthday is in November.

Cake was given out to everyone; however, Kenneth Chaney received his own cake with a special 100th birthday cake topper.

A few of his children shared their favorite memories of their dad. 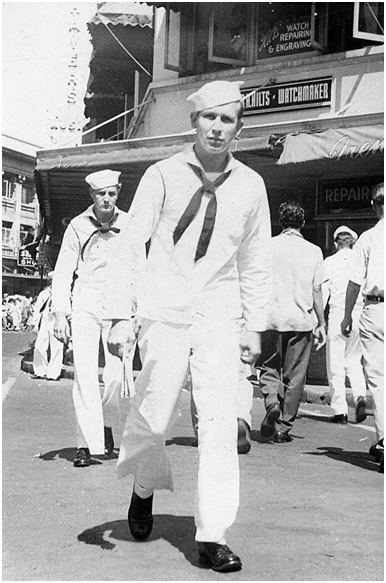 Michael Chaney said some of his favorite memories come from the last 40 years of spending time with him on boats.

Kenneth Chaney did carpentry work on Louds Island, off Round Pond. He bought a house on the island and Michael Chaney’s children would visit him on summer vacations.

“He took seriously his family heritage up on the land on Golden Ridge,” Michael Chaney said. Kenneth Chaney is the fourth generation with roots on Golden Ridge Road.

Steve Chaney said he used to stack hay with his dad. He would climb up onto the bed of a truck to stack the bales and his dad would throw them up to him.

One day, when he was around 13, his dad began throwing them too fast.

“He threw them up faster than I could stack them, so I started throwing them back down at him,” Steve Chaney said, laughing at the recollection.

Larry Chaney described an incident with his two daughters and a kite that makes him and his wife laugh to this day.

When his daughters were young and visiting their grandfather, they went out to fly a kite.

The wind was already strong, but it began to pick up and then, without warning, Larry Chaney’s younger daughter was being pulled across the field. She eventually let go and the kite blew away, making his daughters upset.

After locating the kite in a tree, Kenneth Chaney went to get a ladder, but realized the kite was too high to access.

He went back to his house and switched out the ladder for a chainsaw.

“As the person he has always been, family is most important, and so he cut down the tree … and the kite was not injured and we brought everything back to the house and celebrated,” Larry Chaney said with a laugh.

“He will really always do anything for anybody,” he said.

For Dennis Chaney, all the moments he had with his dad were great.

“I thank him for everything he taught us growing up. He always pointed us in the right direction,” he said. “He was always there when we needed him.”