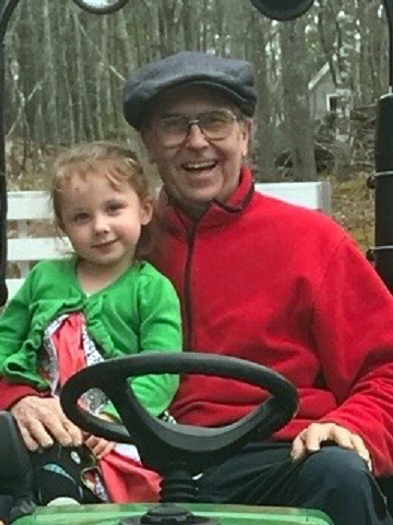 John Underwood with his granddaughter, Amira. Underwood died April 9 while assisting at an emergency scene near his home on River Road in Edgecomb.

An Edgecomb man’s last act before his untimely death was as a good Samaritan – assisting with traffic control after a truck crash by his home. Now, his widow is in search of someone to purchase the business the couple built through “blood, sweat, and tears” over the last quarter-century.

Peter Lombardo, 30, of South Bristol, was driving a 2011 Toyota Tacoma north on River Road, according to Lincoln County Sheriff’s Office Lt. Brendan Kane. The road was slick due to snow and ice, and the vehicle slid off the road and struck a pole. Lombardo was not hurt.

John Underwood and his wife, Mary Sweeney Underwood, had sat down to eat dinner at their home in Edgecomb when the accident occurred, Mary said.

“We went out to make sure the man got out,” she said in a phone interview. “And then John said to me, ‘I’ll walk up and direct traffic one way and you can direct it the other.’”

Shortly after, Mary heard someone yelling that John had fallen to the ground and wasn’t breathing. An emergency medical technician with the Edgecomb Fire Department was evaluating Lombardo at the time and came over to assist, according to Edgecomb Fire Chief Roy Potter.

“The firefighter EMT immediately began CPR and relayed information to the rest of the responding units,” Potter said. “I arrived shortly after (and) we continued CPR as (Central Lincoln County Ambulance Service) arrived, but unfortunately the gentleman was pronounced at the scene.”

“He was so healthy. He had had no health problems before,” Mary said. “But it was his time. He died looking up at the trees and the snow, and I think he would have liked that.”

John and Mary had been married 43 years. Mary was in college when they met. John was looking into going into the priesthood, but “that took a bit of a back burner,” Mary said. The couple had one son, Patrick.

John went to school to learn about working with sheet metal, then worked as a metalsmith for 48 years. His first business, J.T. Underwood Co., was one of the first businesses in northern Maine to have a computerized plasma cutter, Mary said.

For the last 25 years, Mary and John worked together at their business Sweeney Ridge Designs, which combined John’s plasma-cutting with Mary’s artistic abilities to create items such as napkin holders, welcome signs, ornaments, and more. The name of the business stems from the name of the farm in Fort Fairfield where Mary grew up.

In addition to selling at retail shows in the area, the business ships wholesale orders to shops around the country. Locally, Chickadee Flea in Damariscotta has started selling some of the business’s products, Mary said.

“(John and I) had a wonderful time together, not just working together but in life,” Mary said. “I really enjoyed everything we’ve done together.”

For the past 10 years, the couple has resided in Edgecomb, where John was deeply invested in the community in quiet ways, Mary said. He would walk for an hour and half on a Boothbay Region Land Trust trail every day with their dog, a chocolate Lab named Unsinkable Molly Brown.

The couple adopted the dog from New Orleans after Hurricane Katrina. John would always carry a pair of trimmers in his pocket and pick up any baggies of dog waste left along the trail.

“He kept to himself. You wouldn’t see him in groups, but if there was something someone needed help with, he would volunteer,” Mary said. “He would show up, do the work, and that was it. He didn’t talk about what he did, he didn’t brag about it, he just did what he could to help.”

In the days since John’s passing, Mary said, she has experienced a continuous outpouring of support from people who knew her husband, some of whom have been surprised about the life he led.

“Just today, there was someone who stopped by, and he was shocked to learn that John had this business,” Mary said. “He was just so humble about talking about his accomplishments, but he took pride in his work.”

In hopes of continuing the legacy of Sweeney Ridge Designs, Mary hopes to sell the business to a local family. She said she cannot keep the business going by herself, and plans to move closer to her son’s family.

“It was something we talked about, but John was so healthy that he thought he had so much more time to plan,” Mary said. “But he felt so strongly about small business, especially small, family-owned businesses. That’s my focus now. I want to try to find the right person to take this business on, to continue our work.”

“If John could do anything, he would want to make sure the business he worked so hard for, the one that provided for us, would do the same for someone else,” Mary said.

For more information about Sweeney Ridge Designs, email Mary at mary@sweeneyridge.com or call 482-0499.