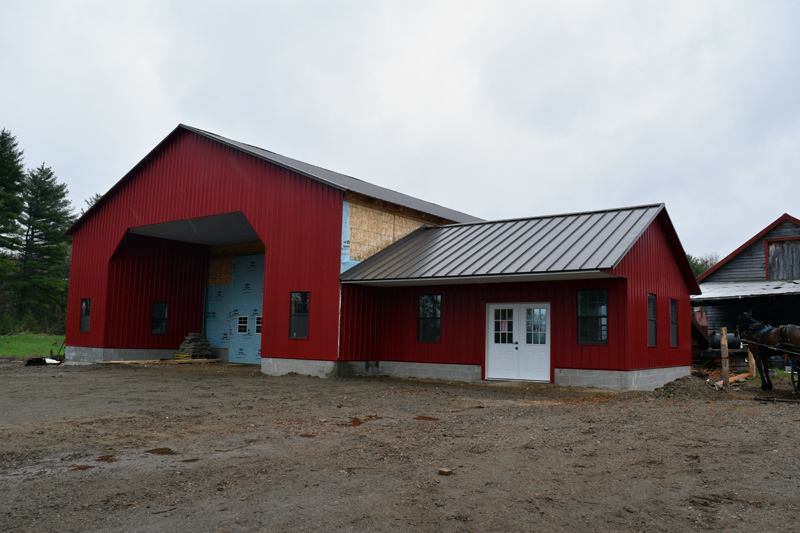 The exterior of Whitefield Metal Sales, a new manufacturer of metal roofing and other products at 69 Mills Road in Whitefield. Work on the building’s siding is ongoing. (Jessica Clifford photo)

Eli Troyer and Mose Swartzentruber co-own the business, which opened in late April.

“Since I was 16, we’ve been roofing, building, and using the product. Now we’re making it,” Troyer said. He has about 15 years of experience working with metal.

Troyer has never owned a metal shop before, but previously owned a shop in Kentucky that made packing materials, known as banding groove materials, for pipe companies. He sold the shop and moved to Maine in 2018.

Swartzentruber, Troyer’s brother-in-law, has five years of experience working with metal and worked for Troyer in Kentucky.

“We checked into doing that,” Troyer said about the packing materials business. “The margin was too tough on that. We just didn’t think we’d be profitable enough for that up here.”

In addition, Troyer said he wanted a “different taste” in work. “What got me motivated was … trying to provide a quality product with a quick turnaround time,” he said.

Unlike a number of local Amish businesses on the same property as their owners’ residences, Troyer and Swartzentruber settled on the property at 69 Mills Road because it was “away from the house.”

“We can go home, lock everything down, and have a little more peace at the house,” Troyer said.

Whitefield Metal Sales buys metal of various colors in bulk, then cuts panels of any custom length for use on any house, barn, or shed. The roofing has one “profile design,” which is the pattern of grooves in the metal. The company uses a machine with a motor to create the profile.

The company does not install the metal roofing or siding. However, Troyer said they can recommend contractors who can do the work. 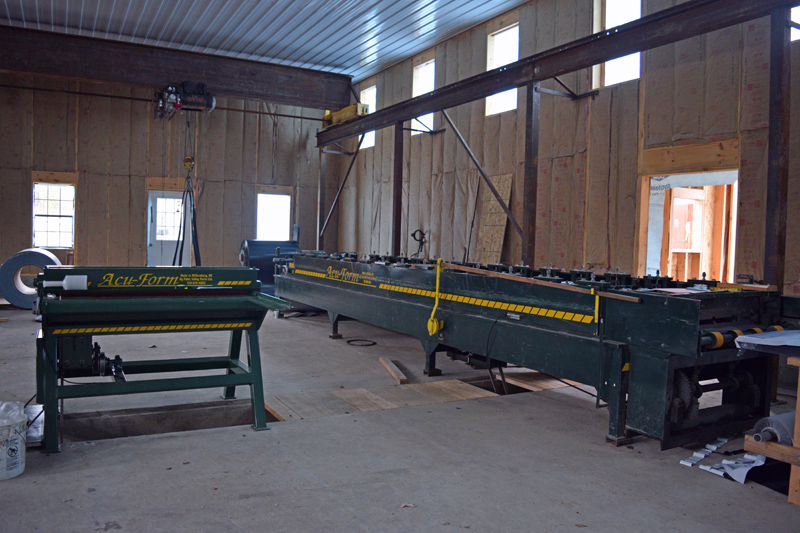 The business also offers white interior liners, which are metal panels for the inside of a building; and Galvalume, metal with no color. Both of these metals are 30 cents cheaper than the regular price of $2.40 per linear foot. They will also offer standing seam in a 15-inch metal panel, which is roofing that does not show any fasteners, for $2.15 per linear foot.

Troyer said they use high-quality metal that has a 40-year paint warranty.

The final product can be seen on the shop itself, which sports dark red metal siding and a metal roof. The metal work on the outside of the shop is still being completed, Troyer said, as is a metal sign that will replace the one currently in front of their shop.

After they receive an order, the business partners expect a turnaround time of 1 1/2 to two days. Troyer said this may change in the future, depending on their customer base.

The final product can be delivered within an 80-mile radius or customers can pick it up at the shop, Troyer said.

In addition to selling the metal roofing, Whitefield Metal Sales will sell the accessories necessary to install the roofing, such as closures and screws.

Whitefield Metal Sales will hire two employees to assist the business partners. However, they are “looking to add more in the future,” Troyer said.

“The more jobs we can provide here, the less buggies on the road traveling,” Troyer said. “That would be a good thing.”

At this time, the best way to contact Troyer and Swartzentruber is to go to the shop at 69 Mills Road. They hope to eventually have a sales representative to take orders.

Whitefield Metal Sales will hold an open house from 7 a.m. to noon, Saturday, May 25. Troyer said they will have free coffee, doughnuts, and fried pies. The public is welcome to come see what they do.

Troyer thanked the Chase family, of Whitefield, for offering them the land, which is going through the sale process. He also thanked his neighbor, Dan Burns, and his family for cooperating with them during construction.