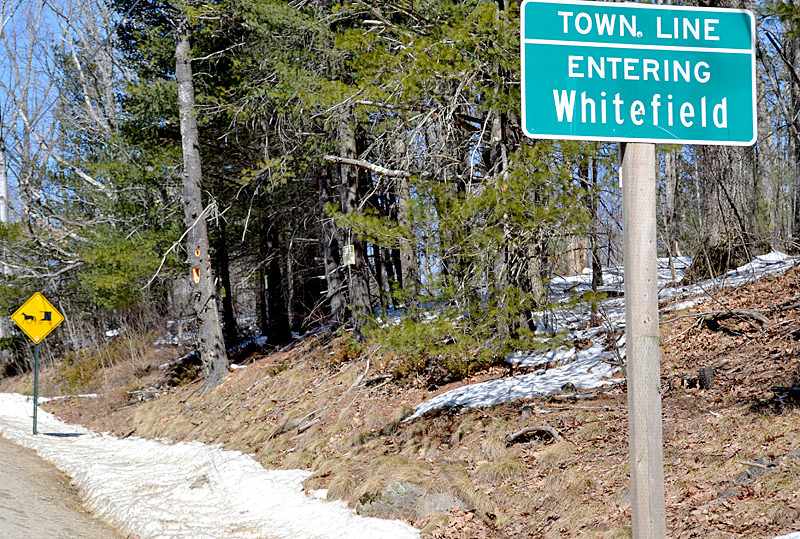 Whitefield is now home to an Amish community. The Yoders moved to town in mid-March and will be followed by several other Amish families. (Abigail Adams photo)

Mose and Anna Yoder, originally of Depeyster, N.Y., were in search of an area where their family could earn a living and still maintain the customs of their Old Order Amish faith, they said. They now call Whitefield home.

The lifestyle of the Amish community differs from “the outside world” and there are “do’s and don’t’s,” to interactions with it, Mose Yoder said. The Amish travel at a slow pace, and people in the area “may not be used to” sharing the road with a horse and buggy going 5 mph, he said.

However, maintaining the rural, agricultural character of Whitefield is one of the town’s often-stated goals. The Amish families relocating to Whitefield share this goal, as living off the land is a central tenet of the Amish way of life, Mose said.

Through communication and respect, the Yoders and three other families that will soon move to town see Whitefield as a place where the two worlds can not only co-exist, but can also complement each other.

It is also a place where Amish families will have economic opportunities and still be able to preserve “the old ways,” Mose said.

Mose and Anna Yoder have lived in Upstate New York in a community of about 300 families their entire lives, they said. Uprooting their 10 children to move to a new area was “nerve-wracking some days,” Mose said.

With the Amish community growing in New York, it was becoming more difficult to earn a living through the traditional trades of farming and carpentry, Mose said.

“Competition was getting busy,” he said. “People were trying different things because they needed jobs.”

The Yoders began to scout out new areas where they could maintain their lifestyle and earn a living through the traditional ways. “I have eight sons. They’re going to need jobs one day,” Mose said. They turned their search to Maine.

Pat and Robin Chase, of Whitefield, learned that Amish families were interested in relocating to Maine and sent a letter asking what they were looking for in a community. The letter was forwarded to the Yoders and they responded.

The Yoders were expecting a return letter in a few weeks, Mose said. They were surprised when the Chases showed up at their house a few days later. “We sat down and talked,” Mose said. “That’s how all this started.”

Pat and Robin Chase have three farms on several properties in Whitefield, but are getting older and looking to downsize, Robin Chase said. They have protected some of their property with easements to ensure it will always be used for agriculture, but not all of it. “We can’t just have anyone buy it,” Robin said.

When the Chases heard the Yoders were planning a trip to Maine, but were unsure if they could come to Whitefield, they traveled to meet them. The Yoders came to Whitefield on their next trip and the Chases hosted a potluck to introduce them to the community.

“It was a nice, relaxing atmosphere,” Mose said.

Over the next several months, the Chases helped the Yoders and several other families locate property in town that would meet their needs. The Yoders purchased land on Route 218, and in a total of 20 days built a barn, which will house the family until their permanent home is built. They moved in mid-March. 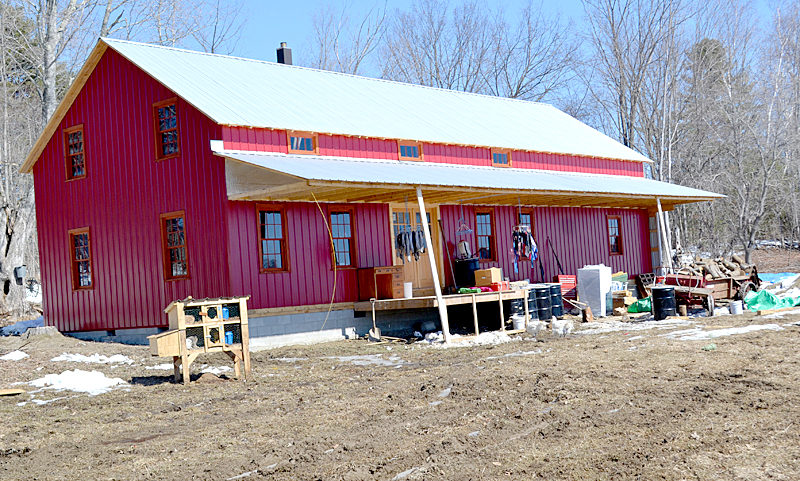 The Yoders moved into the barn they built on their Route 218 property in mid-March. The barn will serve as a temporary home until they are able to build a house on the property. (Abigail Adams photo)

Carla and Mose Miller bought property on Route 17 and plan to move in April, Mose said.

The Hostetlers, of Kentucky, plan to move to Whitefield soon on property they bought on Route 218. Another family is also planning to move to the area, but does not own property and is exploring renting, Mose said. 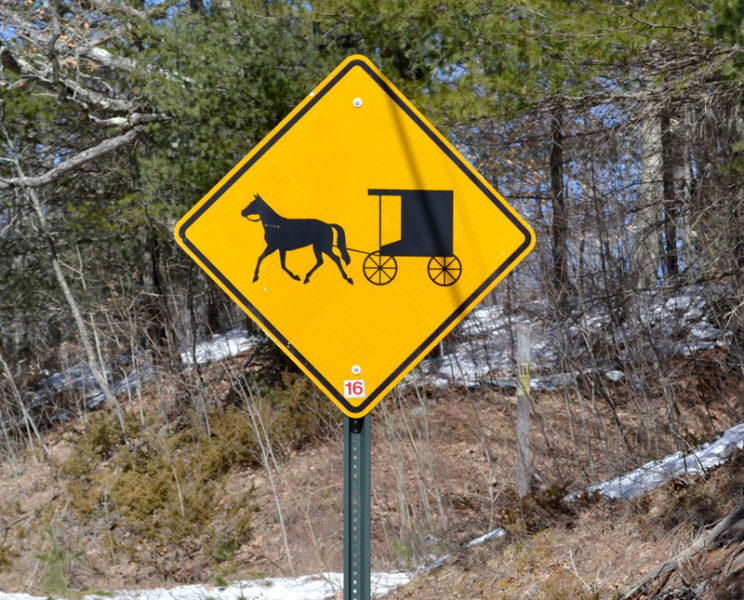 A sign on Route 218 in Whitefield cautions motorists to be aware of horse-and-buggy traffic. (Abigail Adams photo)

Horse-and-buggy signs now dot Route 218 and other routes the families will travel alongside motorists. Horse-drawn buggies travel at a slow pace, and may take motorists by surprise with the hills and turns of Whitefield roads, Mose said.

Drivers of horse-drawn buggies are taught to check the area around them and pull over to allow motorized vehicles to pass as much as possible, Mose said.

Motorists should not honk, because it may spook the horses, Robin said.

“Wherever we live, we all have to learn how to respect each other,” Mose said.

Mose was brought up in the customs of the Old Order Amish faith, and the reasons for those customs are difficult to explain in English, Mose said. Pennsylvania Dutch, a combination of German, English, “and some of our own words,” is his family’s native language.

“It’s easy to pick up if you stick around long enough,” Mose said.

Old Order Amish families migrated to the U.S. from Switzerland in the 16th century to escape religious persecution, according to the National Committee for Amish Religious Freedom.

The Amish are “believers in Jesus Christ,” Mose said, and their faith is reflected in their daily life. The Yoders do not use motorized vehicles, electricity, or battery-powered equipment, which limits their ability to work with outside companies, Mose said.

“It’s a joke we have that we use wireless,” Anna said, referring to some of their tools. The family used hand-powered drills in the construction of their barn, which was livable after 20 days of work.

Construction efforts are a community effort and all are welcome to participate, Mose said. Caution is required, though, because the Amish do not carry insurance if someone is injured. “What we have is assurance,” Mose said.

The Amish community will help each other if someone is in need, he said.

The Amish families in Whitefield will establish their own school for their children in the fall, Mose said. The Amish schools are for grades one through eight. They are taught the basics so when they become adults “they can survive,” Mose said.

Pictures are prohibited, and no one in the Amish community will pose for a photograph, Mose said. However, when people stop to take photographs, it is not necessarily considered disrespectful.

“We know people are used to it, and for them it’s an everyday thing,” he said. If photographs are taken, it is preferred that they be at a distance, and facial features are not recognizable.

However, the best thing to do if there are questions is to ask, Mose said. The Yoders welcome visitors and conversation. “Roll up and say a warm hello,” Mose said. “We want to get to know people.”

The friendship the Chases have formed with the Yoders and other Amish families “have enriched our lives,” Robin said. The Chases shared their house with several Amish families interested in relocating over the past year.

While prohibited from using electricity in their own households, the families are respectful of the lifestyle of the modern world. “Their custom was to not disrupt what we normally do,” Robin said.

The Amish lifestyle is not that different from those of the back-to-the-landers, homesteaders, and others in the area who live off the grid, Robin said. 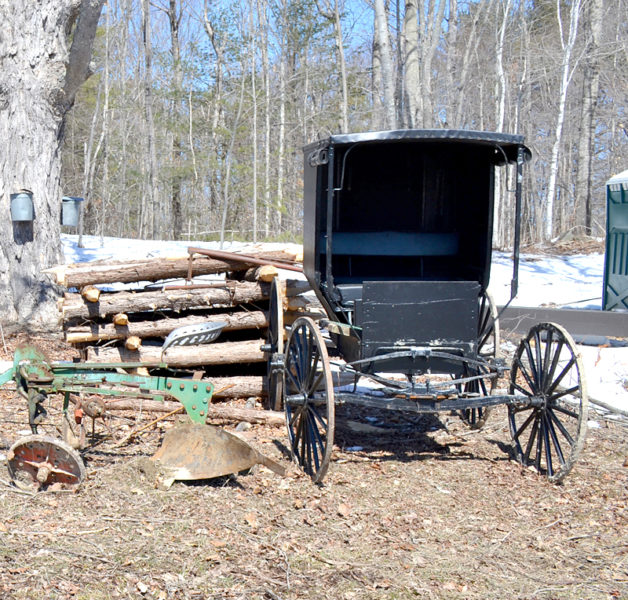 The Yoders’ buggy takes a rest Thursday, March 23. A horse and buggy will be their primary mode of transportation as they travel through town. (Abigail Adams photo)

“They’re no different than any of us,” Robin said. “They just want to support themselves, just like anyone else.”

The welcoming the Yoders have received in Whitefield has made Robin proud of her community, she said.

The community support is helping the Yoders establish their farm in Maine, which is much different than the farmland in Upstate New York, Mose said.

In New York, the family was able to grow oats, corn, hay, and winter grains, Mose said. The fields are smaller and the land more wooded in Whitefield, Mose said, so the Yoders will now have to learn smaller-scale farming.

Mose plans to build a sawmill on the property, which he hopes to have up and running by May. Once established, the Yoders also hope to build furniture, which people can stop in and request.

The Hostetlers will also have furniture for sale when they move, Mose said.

The families were initially looking to relocate to the Monmouth area, but will have an easier time bringing their product to market from Whitefield, Robin said.

The immediate focus, however, is to get settled in the area, Mose said.

The Yoders do not know much about the Amish that have settled in other areas of Maine, they said. They are from different families, but it is good to have a mix in the area, Mose said.

It will allow the Amish community to grow, Mose said. “It’s amazing how things come together,” he said.