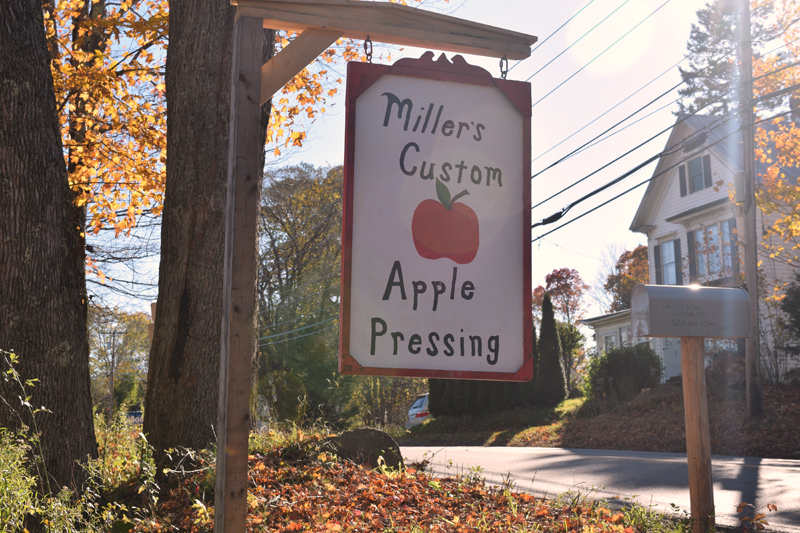 The sign for Miller’s Custom Apple Pressing on Route 218, next to the North Whitefield Superette. (Jessica Clifford photo)

An Amish family in North Whitefield has started a seasonal business: Miller’s Custom Apple Pressing. The business does not sell its own cider, but makes cider for customers who bring in at least 5 bushels of apples.

The Miller family built a small red barn to house the business next to their home on Route 218, by the North Whitefield Superette.

Jerry and Katieann Miller started the business the last week of September, according to Jerry’s father, John Miller. The family had never made apple cider before this year. 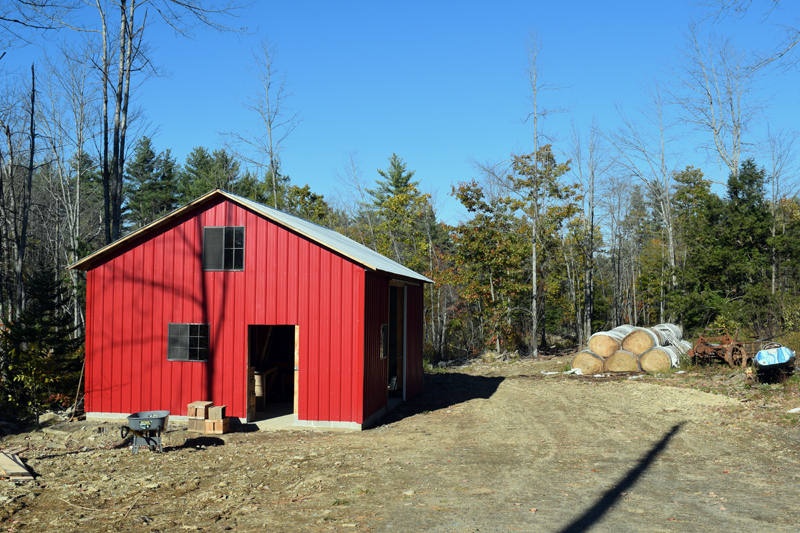 The Miller family is one of several Amish families who recently settled in Whitefield and have begun several small businesses. John said they moved to the town in April from upstate New York.

Jerry and John bought the machine from someone in Benton, in Kennebec County, and were given a list of the former owner’s 90 customers.

An engraving on the large wooden machine reads “Old Faithful.” The machine runs on a motor. 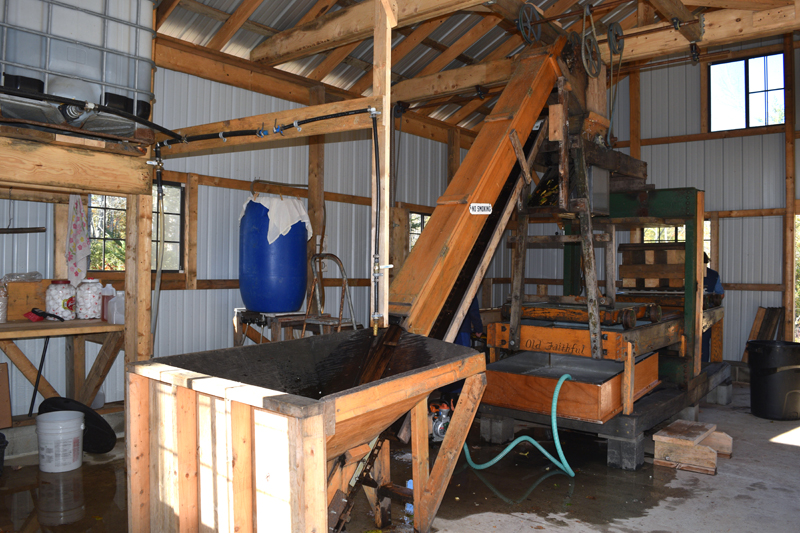 The Miller Family’s cider press. The family saw an ad for the press in Uncle Henry’s and bought it from someone in Benton. (Jessica Clifford photo)

The pressing starts by placing whole apples into a bin. The apples move up, through an “elevator,” to where they are chopped. The cut apples are dropped down by a lever into a covered pan. The pans are layered on top of each other. A hydraulic pump squeezes the juice from the apples into another pan, John said. Jerry then pumps the cider into a barrel and uses a faucet to pour it into gallon and half-gallon containers.

The worst part? “It can be a sticky mess,” Jerry said, referring to the cleanup.

People have come from as far away as Portland and Monmouth with bushels of apples for the Millers to press, John said.

“A lot of people that brought apples wanted to wait to bring their apples until we had our first frost,” John said. “I guess it makes your cider better after we have that cold snap.” 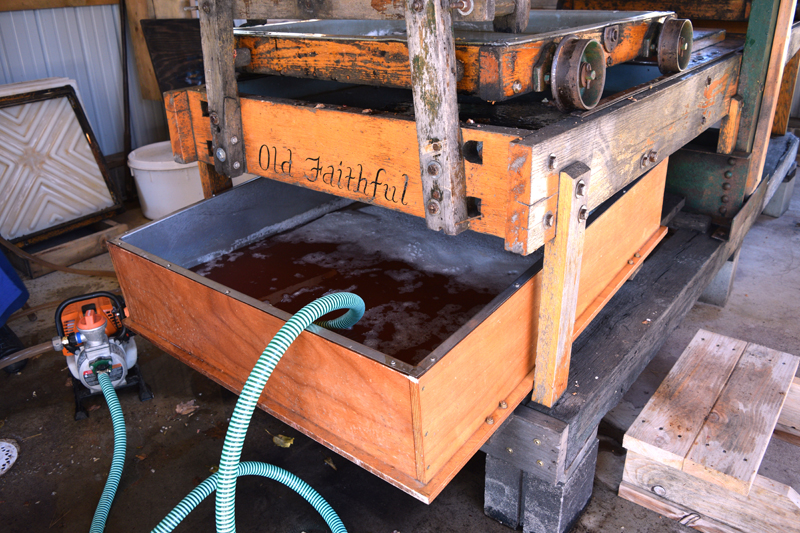 Apple cider is made in the Millers’ pressing barn. The engraving on the press reads “Old Faithful.” (Jessica Clifford photo)

Some will bring their own wooden barrels to make hard cider.

“A lot of people, they’ll stay here while he’s doing it,” John said. “Some people, when they bring their apples, they might help put the apples in the bin and have the elevator take them up to the grinder.”

Since starting the business, the Millers have had about 15-20 customers.

Anyone can bring apples, but Jerry said he and his wife usually require a day or two days of notice. They will press as little as 5 bushels of apples at a time. To contact the Millers, visit or send a letter to 25 Mills Road, Whitefield, ME 04353.

Jerry suggested that McIntosh apples taste best when pressed, while John added that the riper the apples, the better the cider. 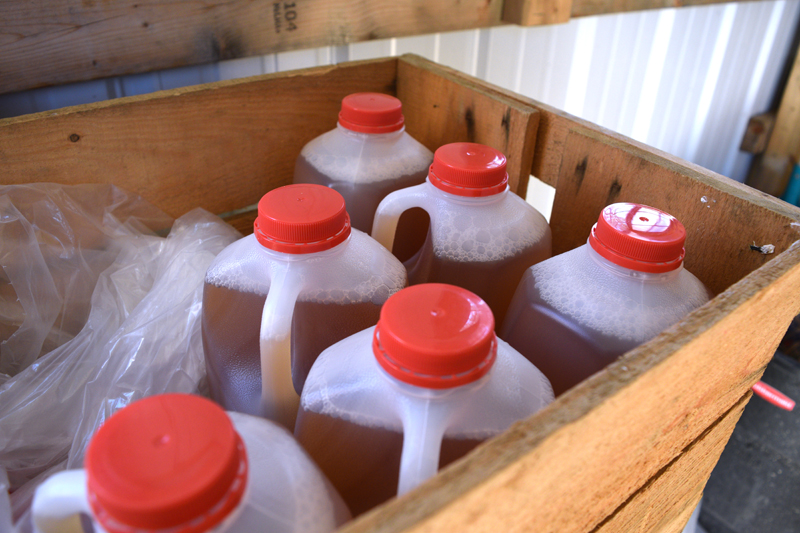 Half-gallons of cider in a crate at Miller’s Custom Apple Pressing. The Millers will make cider for anyone who brings as little as 5 bushels of apples. (Jessica Clifford photo)

The Millers do not sell cider themselves because they do not have a license to do so.

John said they recently learned that the Whitefield selectmen are considering a food sovereignty ordinance, which would allow farmers and food producers to sell food directly to customers without state or federal inspections.

The ordinance would allow local food producers to sell their products from the site of production, but not at farmers markets or to stores for resale.

If such an ordinance passes in the future, John said the family would like to sell cider themselves.

Miller’s Custom Apple Pressing is open seasonally, and will close around the end of November.