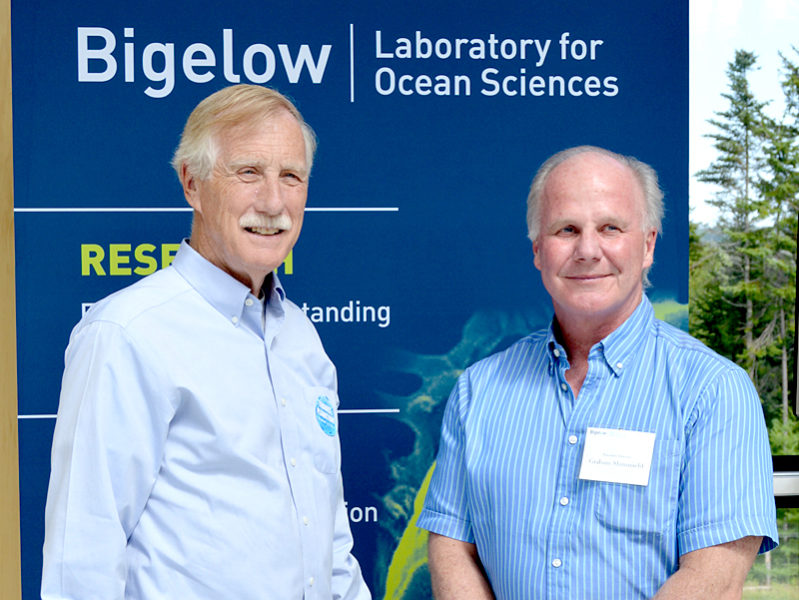 Bigelow Laboratory for Ocean Sciences, founded in 1974, is a nonprofit, independent research center and serves a base lab for ocean science research conducted all over the world.

“At any given time, someone is in the Arctic, Pacific, Antarctic, all over,” said Executive Assistant and Education Coordinator Valerie Young.

About 500 visitors of all ages toured the laboratory last year.

“We encourage families with kids, or adults, or even those just curious in the community who want to see what’s going on in their backyard, to come and tour the labs,” said Young.

The open house, which ran from 10 a.m. to 2:30 p.m., had a wide range of scheduled events, including scientific talks, presentations, lab tours, and activities. The activities were meant to promote hands-on learning, such as the “ocean acidification in a cup” activity, where visitors blew through a straw and watched the carbon dioxide from their breath alter the measured pH in their cup.

King spent his time at the open house speaking directly with research scientists and learning what new research has uncovered. The research ranged from recently published to ongoing.

One scientist, Dr. Patricia Matrai, told King about her research measuring CO2 levels using buoys placed in various spots throughout the Arctic Ocean, as well as the Gulf of Maine.

Matrai showed King a rough chart with measurements over the last seven years from all the buoys. The chart showed CO2 levels consistently rising each year, even with fluctuations of the seasons.

“This is amazing. This is in just a few years,” said King. “A part of my mission is to educate people about this, so any extent of information you could give me about this will be very helpful.”

King also learned about research on aquaculture, and spoke with Dr. Nichole Price about how changing ocean temperatures and acidification are affecting ocean crops.

Price said that while efforts to sustain the crops have been somewhat successful at adapting to the changes, it’s not yet enough.

“We’ve been using a band-aid where a tourniquet is really needed,” said Price.

King said he first came to Bigelow Laboratory almost two years ago during its 40th anniversary and knew he wanted to come back to speak with the scientists on what they’ve been doing and what they’ve found.

“I’m very interested in what’s going on in Maine, and all over the world, in science and developing research,” said King.

Bigelow Executive Director Graham Shimmield said King isn’t the first Maine senator to tour the labs, which have had visits from Sen. Susan Collins and former Sen. Olympia Snowe in the past.

“We try to encourage visits from legislators,” said Shimmield. “It’s part of making sure congressional delegations know what’s going on.”