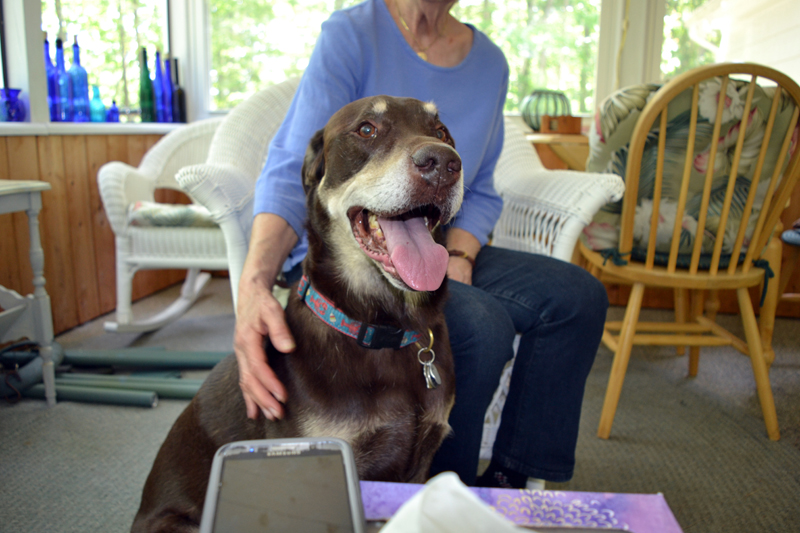 A 61-pound Labrador-retriever mix who was the longest-tenured resident in the history of the Lincoln County Animal Shelter has found a happy home.

Kat Allaker, of Phippsburg, adopted Jeter on March 10, the day before his 9th birthday.

Jeter was 5 years old when he was dropped off at a shelter. He lived at Pope Memorial Humane Society in Thomaston for a year before being transferred to the Lincoln County Animal Shelter in Edgecomb in December 2015.

While many shelters would euthanize a pet in Jeter’s situation due to costs or space, the Lincoln County Animal Shelter is a no-kill shelter, meaning Jeter would have a place to stay indefinitely.

The animal shelter worked to find Jeter a home with special videos and social media posts.

Jane Siviski is the marketing manager of the Coastal Humane Society, which owns and operates the Edgecomb shelter. Considering the reasons for Jeter’s long stay, Siviski said some dogs were better behaved, and Jeter was often the “last to be looked at.”

Allaker’s previous dog passed away in November 2016, and she was looking for a new canine companion. That was when she saw Jeter’s story and decided to pay him a visit.

She took Jeter for a few walks first. One day, after a walk, she asked the shelter if she could take him home, and the staff happily agreed. Allaker was told that Jeter might need some time and training before he would be obedient, and Allaker said she was up for the challenge.

Jeter went on to not be a challenge at all. 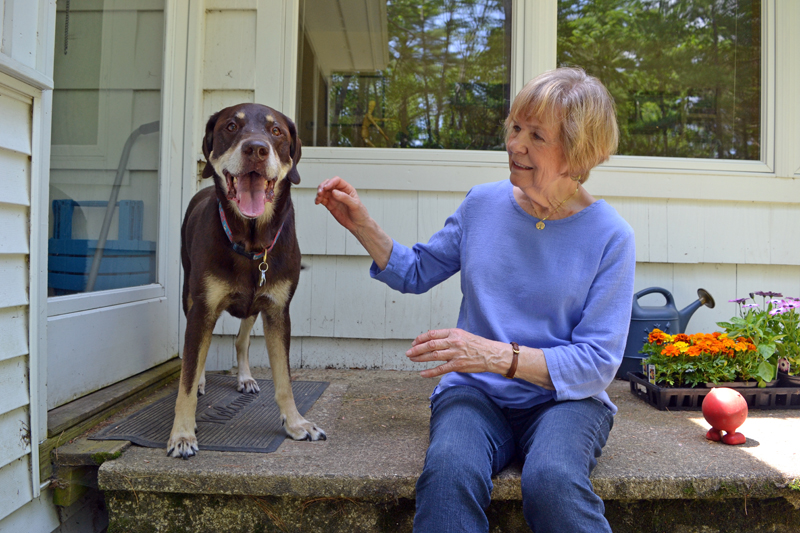 Jeter and Allaker have a chat on the steps leading to Jeter’s very own fenced-in area. (Remy Segovia photo)

“He’s wonderful,” said Allaker. She expected accidents after prolonged time in shelters, but Jeter proved to be well-housebroken.

Ever since a few days after going home with Allaker, Jeter has become protective of Allaker against anyone he thinks might be a threat, even her friends.

According to Allaker, Jeter is very affectionate.

“He likes to be hugged, and he likes to hug,” said Allaker. “I’ve never had a dog that would actually come up to me and hug me. He does.”

Allaker shared an example of just how much Jeter loves hugging.

“I woke up one morning and he was sitting next to me, instead of at the bottom of the bed, which is where he sleeps, and he’s looking at me, and then he turned his back and he laid down and he actually spooned,” she said. “He stayed like that for about an hour.”

“He makes me laugh,” said Allaker with a smile on her face. “He’s just so weird sometimes.”

Even though Jeter is 9 years old, that doesn’t mean he can’t learn new tricks. Right now, he can sit, lay down, and shake hands. Allaker is teaching him to look at her when she gives a command, in order to prevent him from going a little crazy when other dogs are out and about on their walks.

Jeter seems as though he couldn’t be happier in his new home with Allaker, and the same could be said of Allaker with her new friend.