Fourteen people participated in a “Life Chain” anti-abortion rally near the busy intersection of Route 1 and Route 27 in Wiscasset on Sunday, Oct. 3.

The protesters, on the new sidewalk in front of the municipal building, held large signs reading “abortion hurts women,” “abortion kills children,” “adoption: the loving option,” and “Lord, forgive us and our nation.” 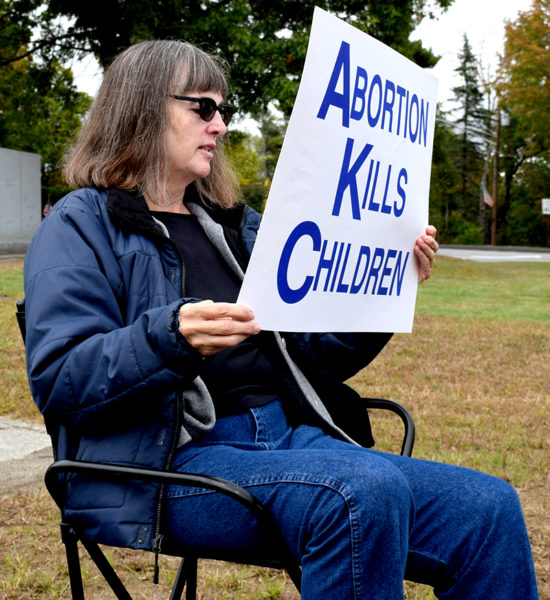 Mary Rose Pray, of Wiscasset, holds a sign reading “abortion kills children” during a Life Chain event in Wiscasset on Sunday, Oct. 2. Pray said she has been participating in Life Chain events since the early 1990s. (J.W. Oliver photo)

Mary Rose Pray, of Wiscasset, said she has participated in Life Chain events since the early 1990s.

In addition to Lincoln County residents like Pray and her husband, John Pray, the Wiscasset event draws participants from Augusta, Bath, and Rockland, she said.

“The numbers change,” she said. “There’s not that many this year. The most we’ve ever had is 100 and the fewest we’ve had is the first year I did it down here in Wiscasset – we had two.”

The participants don’t come from a single organization or even know each other in some cases, but they share a steadfast opposition to what Pray called “abortion on demand.”

Pray said the U.S. Supreme Court, in its Roe v. Wade decision of 1973, did not feel able to decide when life begins, but advances in science have provided the knowledge to make that determination.

“In the last 40-some years, science has come a long way and they do know that life begins at conception – a unique human being is formed,” she said.

Pray said that, if she were to encounter a pregnant woman who was not sure whether to continue the pregnancy, she “would tell her that she has three options right now, and that no matter which option she chooses, it’s going to change her life forever. 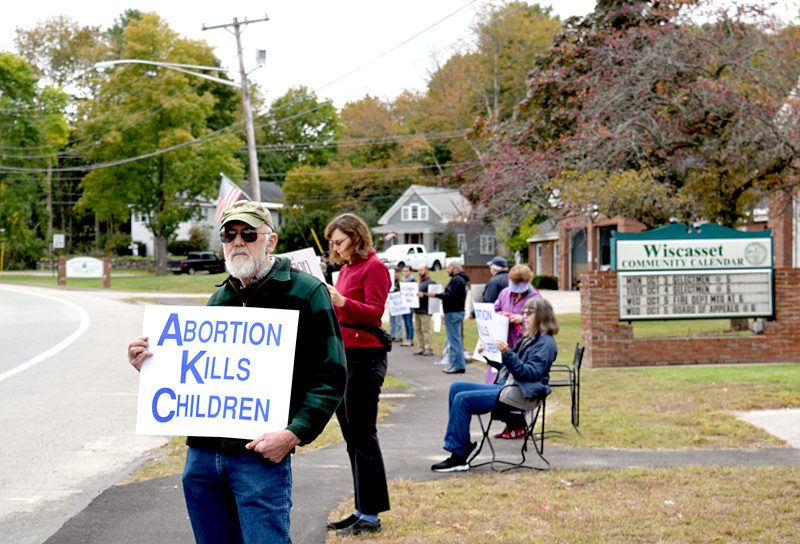 Likewise, the men, women, and children holding signs on Route 1 were not there to pass judgment, according to Pray.

“We do not condemn women that have had abortions,” Pray said. “We pray for people, we support ministries that reach out to help people, and it’s actually just a time to kind of stop and, I know this sounds very religious, but repent of what’s going on in our country.”

Armelle Sigaud, of Rockland, was among the other participants in the Life Chain. 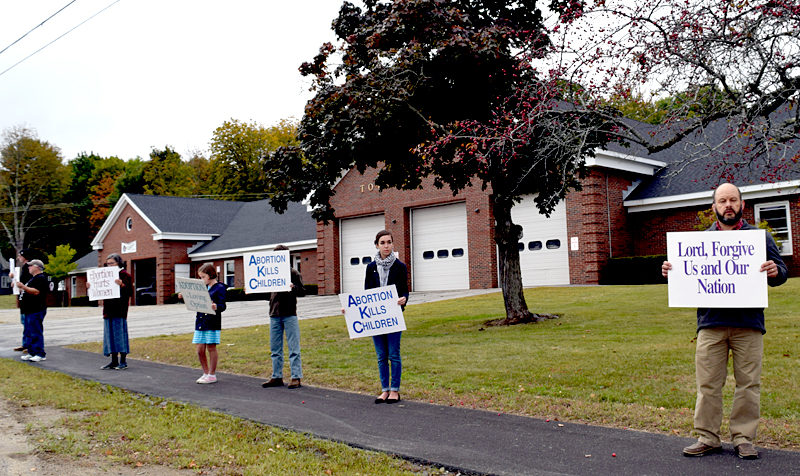 “We’re here because abortion is killing children in this country,” Sigaud said.

Abortions harm the entire family, according to Sigaud.

“It’s not just the mother who’s affected,” she said. “It’s the siblings who could have had a little brother or sister. It’s the grandparents who mourn their grandchild. It’s the dad who sometimes tries to stop his girlfriend or wife and they still do it anyway.”

“We strongly believe this is against God’s law … and if we want the Lord to bless our nation, we have to make sure the little babies who have no voice have someone to defend them,” she said.

Life Chains started in California in 1987, according to Pray. People gather once a year for an hour “to pray for an end to abortion on demand,” she said. The events have spread across the U.S. and Canada “and it makes people stop and think about what’s going on.”

“It’s not fun to come out and to it, but it’s something we feel is necessary,” Pray said.