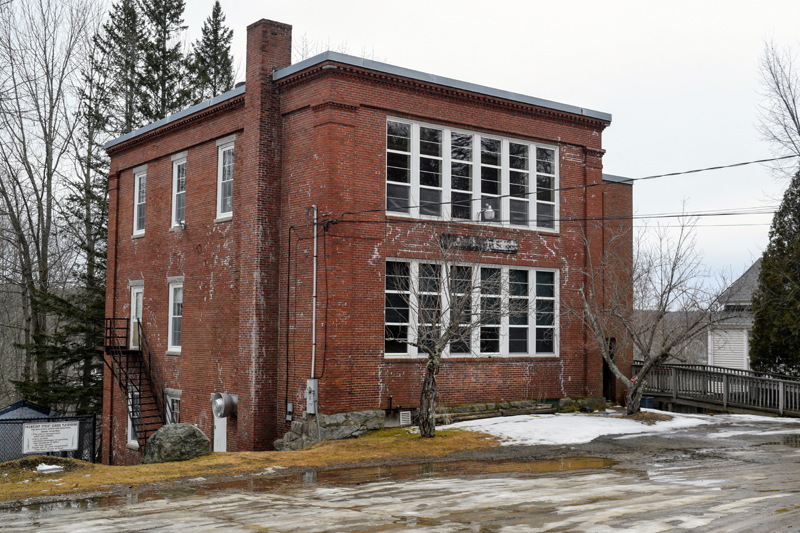 The Friendship Street School at 129 Friendship Road in Waldoboro was built in 1857 and served as the location of the Waldoboro Head Start until September 2021. (Nate Poole photo)

Developers have submitted a proposal to the Town of Waldoboro to renovate the Friendship Street School property into an apartment building with the potential for a retail storefront and other property improvements.

Co-developer Ronald Phillips, who lives on Friendship Street, presented the proposal to the Waldoboro Planning Board at a pre-application hearing on March 3.

The town of Waldoboro purchased the school building from MSAD 40 in 1987 and leased it to Head Start until the organization moved in September 2021.

The town posted a Request for Proposals for the property in November and the developers from Friendship Street School LLC submitted their proposal on Jan. 18.

Butler recused himself as a selectman from all matters involving the proposal for the school property.

The purpose of the proposed project is to renovate the building’s interior into five rental apartments that would convert to private ownership after five years. The plan also includes public parking, a garden, and a trail to the waterfront.

The renovations could potentially include four apartments with one retail space, but Phillips said that the developers have not settled on it.

Planning board members’ questions mostly had to do with who would be responsible for maintaining the land once the building and its units transition to private ownership.

Phillips said that the maintenance of the park and the path to the river could be handled by the future condominium association for the property.

Gayle Erdheim, an abutter to the school property, asked Phillips what sort of retail business may be operated out of the building. 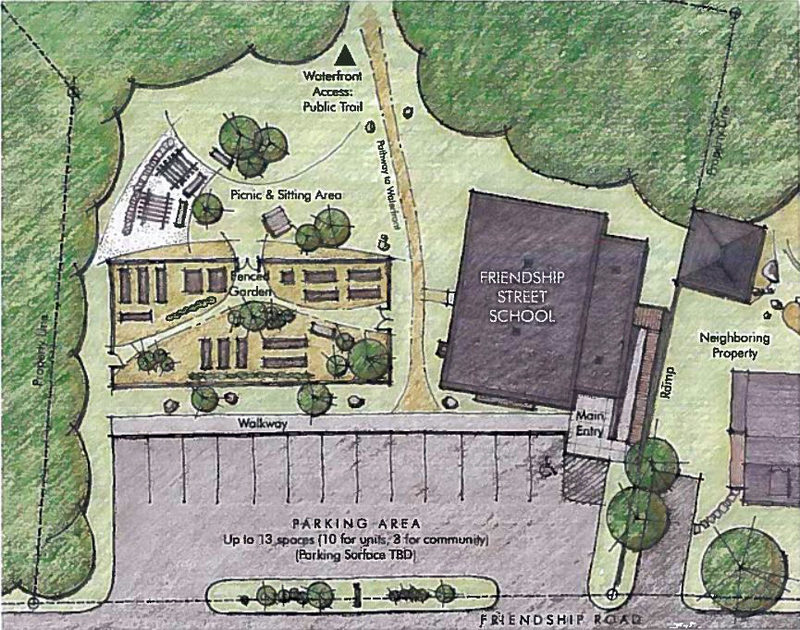 The conceptual site plan for the Friendship Street School property by Medomak Design includes a fenced garden, a picnic and sitting area, a public trail to the Medomak River waterfront, and 13 parking spaces. (Courtesy photo)

Phillips said developers had not discussed the potential for a retail space at length.

Towards the end of making the project financially feasible, Phillips said that the development team intends to apply to have the school building placed on the National Register of Historic Places.

The purpose of going through the national historic register application process would be for the investors to benefit from federal and state Historic Rehabilitation Tax Credit programs, which, according to the proposal, make the project feasible for investors.

The federal tax credit program requires that the spaces be rented for five years before they can be sold for private ownership. According to the proposal, the average monthly rental rate for a one-bedroom apartment would be $1,376.

Developers are also considering installing solar panels in the construction process, unless it disqualifies the development from consideration for the national register.

Phillips said the estimated cost of the project is $1,417,400 with a 22-month timeline from the beginning of construction to occupancy. Friendship Street School LLC is requesting a 10-month option to purchase agreement with the town that would run until the end of December with the option for a 90-day extension.

The acquisition of the building by Friendship Street School LLC would be conditioned upon the town accepting a negotiated sum for the property, approval of the tax credit programs, structural integrity of the building, permitting, and financial feasibility.

Planning Board Vice-Chair Jim Russo said Phillips and the members of the development group should look into whether a retail storefront would be viable at the location given that there is only room for up to 13 parking spaces at the lot, with two dedicated to each rental unit and three set aside for public use.

“The final proposal should ensure that there’s adequate parking shown for all of the stakeholders or all of the users,” Russo said. “I’m sure (as) the project goes forward it’s going to be a success, it’s just these are early days and conceptual days and it’s time to work out these nitty-gritty details.”

Interested members of the public should go to waldoboromaine.org and select “Planning Board” under “Agendas and Minutes” to review the Friendship Street School LLC proposal.

Town Planner Max Johnstone said that members of the public are encouraged to share their thoughts on the proposal with him, Town Manager Julie Kaiser, or the members of the board of selectmen.

(Correction: an earlier version of this article online and on Page 1 of the March 10 print edition incorrectly reported that the acquisition of the Friendship Street School by Friendship Street School LLC would be conditioned upon the town accepting $1 for the property. The Town has not and is not selling the parcel for $1. The developer of the proposal said that the $1 is a placeholder and is up for negotiation depending on the input of the community. The Lincoln County News regrets this error.)