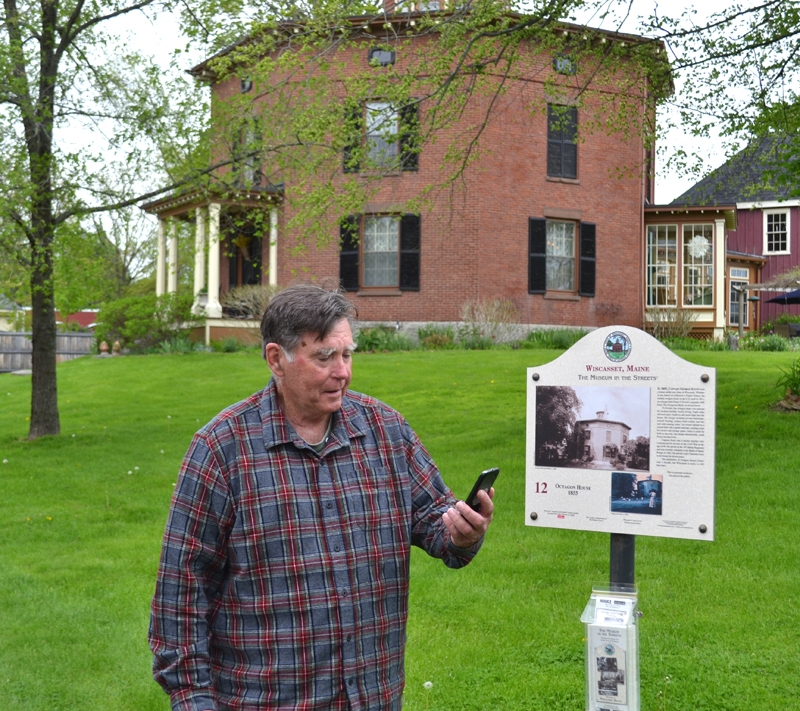 Ed Kavanagh holds a mobile phone in front of his home, the Octagon House, one of the stops on Wiscasset’s Museum in the Streets tour, on Thursday, May 25. The tour is now available as an app. (Abigail Adams photo)

The app, named Wiscasset’s MITS, is now available at Google Play or the Apple app store. It contains additional stops on the tour and “more information than could ever be put on a panel,” Kavanagh said.

The app is helping to raise the profile and impact of Wiscasset’s Museum in the Streets, a volunteer effort that persevered through several obstacles to “tell the story of Wiscasset people otherwise wouldn’t know,” Kavanagh said.

The idea to develop a Museum in the Streets in Wiscasset was sparked about seven years ago with an initial gathering of about 25 people to discuss it, Kavanagh said.

“A bunch of people were interested, but we weren’t sure how it was going to go,” Kavanagh said. Meetings continued and a committee coalesced to take on the responsibilities “of the day-to-day grind” involved in turning the idea into a reality.

Kavanagh was an original member of the group. A history buff, he joined with a personal motivation to obtain historical photos of Wiscasset. The committee made extensive use of the archives at the Wiscasset Public Library, where members found many of the photographs on Museum in the Streets panels, and now on the app.

Once initial research was complete, the committee was tasked with identifying the stops on the tour, and choosing the pictures and writing a narrative for the panels. The most important and most difficult part of the project was the fundraising, he said.

Each panel cost $1,000, and securing the funds to launch the walking tour was a multiple-year effort, Kavanagh said. The committee initially identified 40 locations for the tour, but had to scale back to 29 stops with three main panels providing a map of the tour due to the costs involved. “But we squeaked by,” he said.

After about three years of meetings and stop-and-go fundraising activity, the panels were erected.

The tour is actively preserving the economic, social, cultural, and governmental history of the town. It documents the history of structures such as the Wiscasset Academy building, the Nickels-Sortwell House, the Hilton House and Sunken Garden, and the customs house at the intersection of Water and Fore streets, where customs duties were collected from traffic in the harbor.

“People are surprised to learn Wiscasset had a customs house,” Kavanagh said, but it is an important element of Wiscasset’s former status as a trade center.

The tour highlights the transition in Wiscasset from a “sophisticated seaport” and center of global trade with an economy that primarily depended on shipbuilding to a summer destination for city residents, according to the Museum in the Streets brochure.

The new app adds details and photographs to existing stops, and additional stops the committee was not able to create panels for. The app has been in development for about a year, only becoming available in early May.

Committee member Peggy Konitzky had attended a conference where Action Data Systems’ ActionShow App representatives presented the work of their company, which creates mobile apps for audio and visual tours.

ActionShow App has created tours of the mansions in Newport, R.I., a hiking tour of Jain temples in India, a guided tour of the Royal Grand Palace in Bangkok, and an app for Boston’s hop on-hop off trolleys.

A startup launched by entrepreneur Ushma Shah, Action Data Systems offered to develop the app for Wiscasset’s Museum in the Streets for free. The committee jumped at the opportunity, Kavanagh said.

For the past year, committee members have worked with Shah, recording the narration for the stops, entering the GPS coordinates of the stops, and adding new photographs.

Margo Rafter-Strong, an 11th-generation resident of Wiscasset, narrated the audio segments for the app.

“This really compliments (the walking tour),” Kavanagh said. “It’s more informative now than it ever could have been before.”

The Powder House on Churchill Street is one of the additional stops on the walking tour. The Powder House was built in 1813 to store gunpowder for militias fighting the War of 1812.

It was considered too far from other destinations to include in the walking tour, Kavanagh said. The Moses Carlton House, on High Street, and Kingsbury House, on Federal Street, are other new locations available on the virtual tour, which includes GPS navigation capability.

The feedback has been overwhelmingly positive, Kavanagh said. “People have told us it’s magnificent,” he said. The app will cost about $50 a month to maintain, so the committee’s fundraising will continue, he said.

The app will also allow the committee to continue expanding the tour with additional stops.

Wiscasset’s Museum in the Streets was launched through the dedication of a lot of people, Kavanagh said. With the new mobile app, it will be able to share the heritage of Wiscasset with more people than ever before.

Kavanagh also accomplished his personal goal in joining the committee. “I got a lot of photographs,” he said.