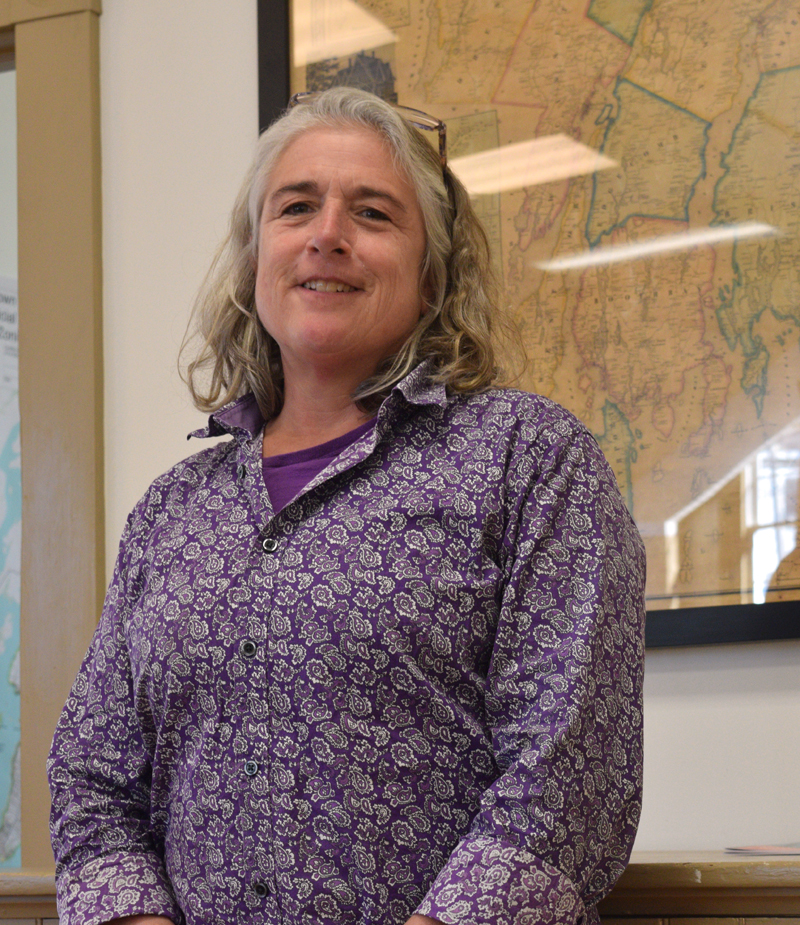 Rachel Bizarro stands in the Bristol town office on her first day as interim town administrator on Monday, Nov. 14. The Bristol Select Board will approve Bizarros contract at its meeting on Wednesday, Nov. 16, which will commence on Jan. 1, 2023, when Bizarro will officially become the new town administrator. (Evan Houk photo)

Rachel Bizarro, who was born in Damariscotta and grew up in Bristol Mills, feels like she was made for the job of Bristol town administrator.

“I felt like the ad spoke to me, like they were looking for somebody from Bristol, with (municipal) experience,” Bizarro said during an interview on her first day in the new post, officially as interim town administrator, Monday, Nov. 14.

The Bristol Select Board will approve Bizarro’s contract at its meeting on Wednesday, Nov. 16, which will commence on Jan. 1, 2023, when Bizarro will officially become the new town administrator.

Bizarro has worked in the town office for 14 years and as town clerk since 2016, learning the ins and outs of local government as it pertains to the unique Pemaquid Peninsula town.

“I’m a true-blue local girl, I guess,” Bizarro said with a laugh.

She now lives in the Bristol village of New Harbor and loves being close to the water where she takes her boat out and walks her dogs at Pemaquid Beach.

“I like being out on the water,” Bizarro said.

Bizarro graduated from Bristol Consolidated School and Lincoln Academy and moved away in her 20s, “as most people do,” she said.

She earned a Bachelor of Science degree in biology from the University of Central Florida, studying marine biology. Her work studying marine life prepared her to work closely with the shellfish and harbor committee for the past 12 years, she said.

After moving back to Bristol in 2001, Bizarro worked at Maine Antique Digest and picked up shifts at local restaurants, while at the same time raising her son, who also graduated from Lincoln Academy.

In March 2008, Bizarro was hired as deputy town clerk and deputy tax collector in Bristol following the retirement of longtime Town Clerk Pat Landry. She decided to take a chance and apply for the position in the town office, considering the stability of working in government and the job’s nearby location.

“I got lucky enough to get it,” Bizarro said.

In 2016, the select board appointed Bizarro as town clerk and she officially started in her new role as interim town administrator on Monday, Nov. 14. The previous town administrator Chris Hall was set to remain in the position until the end of the year, but with Bizarro’s experience she is able to jump right into the work.

Bizarro was selected after a nationwide search led by Don Gerrish, of Eaton Peabody Consulting Group, according to a press release from the company.

A few of the main differences Bizarro anticipates in the new role are working more closely with the select board on various projects in town, like the BCS renovation plans and the ongoing update of the town’s comprehensive plan. She plans on getting up to speed on these projects first and foremost.

“I just want to make the town run well,” Bizarro said. “I just want to keep facilitating and … working with the select board and dong what they want done.”

There are also some bridge repairs requested by the Maine Department of Transportation that Bizarro will oversee, such as the repair of the stone arch bridge on Benner Road.

One of her favorite parts about the job in the town office is interacting with the townspeople, which she hopes to continue to do as town administrator.

Many people have been stopping in the town office to congratulate her and wish her well, she said.

“The townspeople, I just love them,” Bizarro said. “I love the community and the people.”