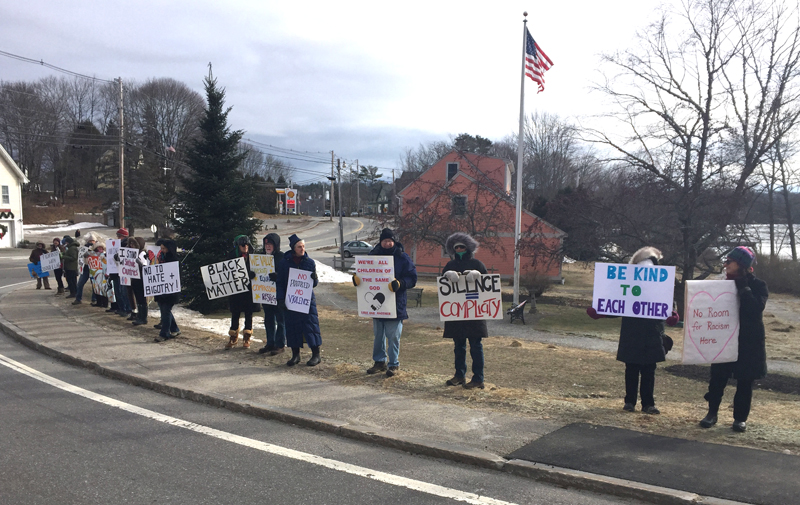 Members of three religious faiths, high school students, and an anti-racism group banded together to celebrate Martin Luther King Jr. Day with a series of events open to the community.

After a successful interfaith celebration at The Second Congregational Church in Newcastle last year, the organizers wanted to mark the holiday with an event that would reach more people, according to organizer Lindy Gifford.

“Last year’s interfaith MLK service was very well-attended, and we wanted to do something that would get even more people involved,” Gifford said.

Gifford is a member of People United Against Racism, a grass-roots coalition that holds weekly vigils at Veterans Memorial Park in Newcastle to protest racism. In addition to members of the community who have joined the vigils, many members of People United Against Racism attend The Second Congregational Church, the Midcoast Unitarian Universalist Fellowship in Damariscotta, and the Midcoast Friends Meeting in Damariscotta, Gifford said. 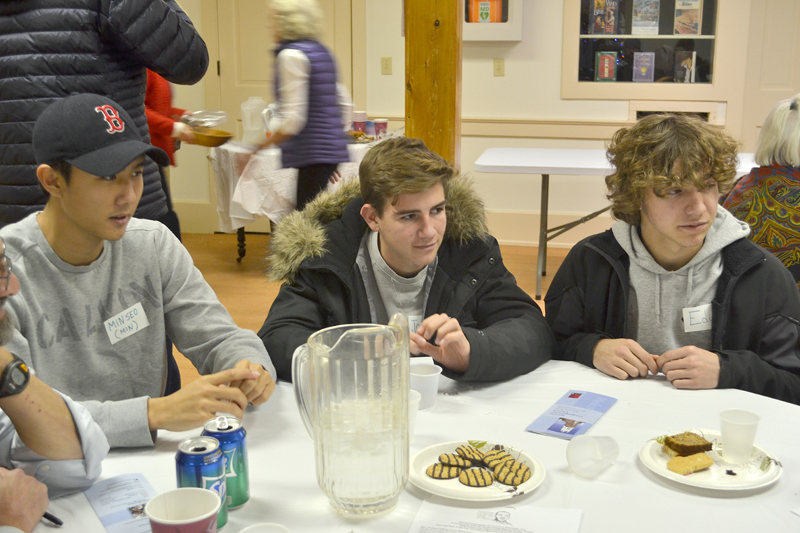 “It started as the three church communities, basically, but now we’ve grown and pulled in people from the community,” Gifford said.

In planning for this year’s series of events, the organizers pulled in participants from Lincoln Academy, the Baha’is of Lincoln County, and the Lincoln Theater.

For the past few years, Lincoln Academy students and the Baha’is of Lincoln County have commemorated the holiday by completing community service projects for anyone who submitted a request. In previous years, the volunteer work has included shoveling snow, assisting with technological problems, and helping move equipment at Lincoln Theater.

“In some ways, Lincoln Academy has a lot of the diversity of the community,” Abbott said. “A lot of our residential students came here looking for the American experience, but the culture of the country right now is a little difficult.” 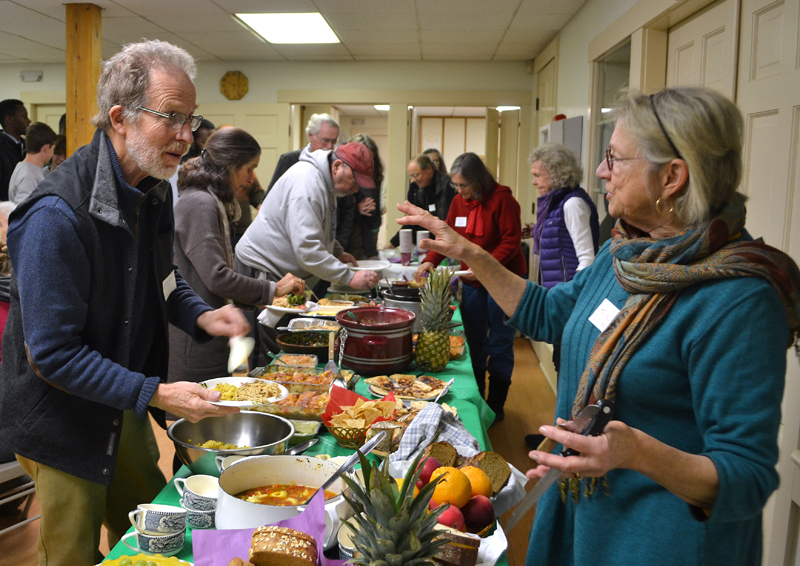 Neighbors George Mason and Paula Christensen, of Nobleboro, greet each other during a potluck at The Second Congregational Church in Newcastle on Martin Luther King Jr. Day. (Maia Zewert photo)

In the week leading up to Martin Luther King Jr. Day, LA students had discussions in their adviser groups about race and tolerance. On Friday, the school hosted an open community meeting with special guest Danielle Conway, dean of the University of Maine School of Law.

“I think that by continuing to have these conversations, we’re increasing education and tolerance in the community,” Abbott said.

Lincoln Theater also joined in the planned celebration by showing a free matinee of “13th,” a documentary about race and incarceration in the country, on Martin Luther King Jr. Day. The documentary is named after the 13th Amendment to the U.S. Constitution, which prohibits slavery. The Rev. Erika Hewitt, minister of the Midcoast Unitarian Universalist Fellowship, led a discussion after the screening.

A potluck dinner and panel discussion about the civil rights movement in the U.S. at The Second Congregational Church in Newcastle concluded the weekend’s events. After a panel moderated by Winthrop Congregational Church Pastor Chrissy Cataldo, the audience broke into small groups to have discussions about how to address racism on a local level.

David Ray (right) speaks during a panel discussion about the history of civil rights in the U.S. as Jim Matlack looks on. (Maia Zewert photo)

The highlight for Gifford, however, was the one-hour vigil in Newcastle’s Veterans Memorial Park. About 30 people showed up.

“We’re so grateful that there is a place to go make a statement, and that’s what we’ve found with the vigil. I think it’s a constant reminder to the community and it’s something we all need to be thinking about,” Gifford said. “We hold it every Monday, but it swells every time something big happens in the news. People know that this is a safe place to go and make a statement when they need to.”

Gifford said she isn’t quite sure what People United Against Racism will do for next year’s Martin Luther King Jr. Day celebration, but she expects a similar series of events.

“We really liked how the events unfolded and how it brought more people together,” Gifford said.