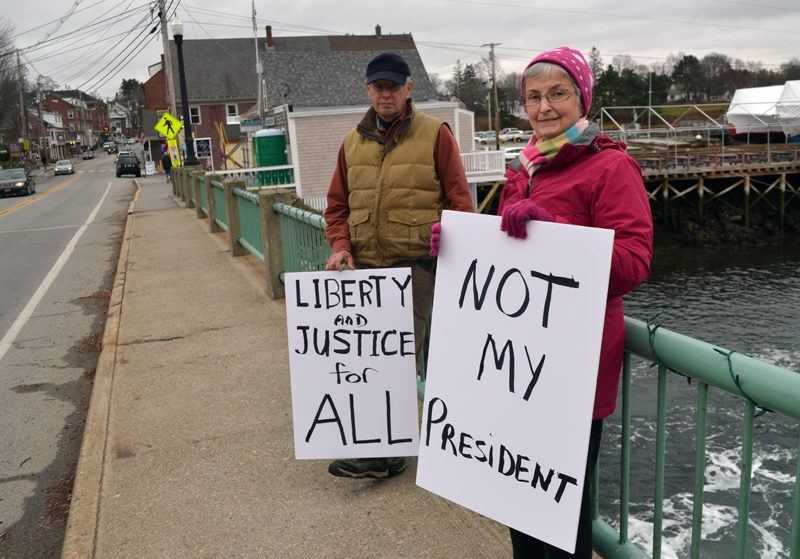 John and Carol Hartman, of Newcastle, participate in a peaceful demonstration on the Damariscotta-Newcastle bridge Saturday, Nov. 26. “This was our first attempt at expressing our opinion loudly and proudly,” Carol Hartman said. (Maia Zewert photo)

Lincoln County residents plan to hold peaceful demonstrations on the Damariscotta-Newcastle bridge for an hour every Saturday to respond to the election of Donald Trump. 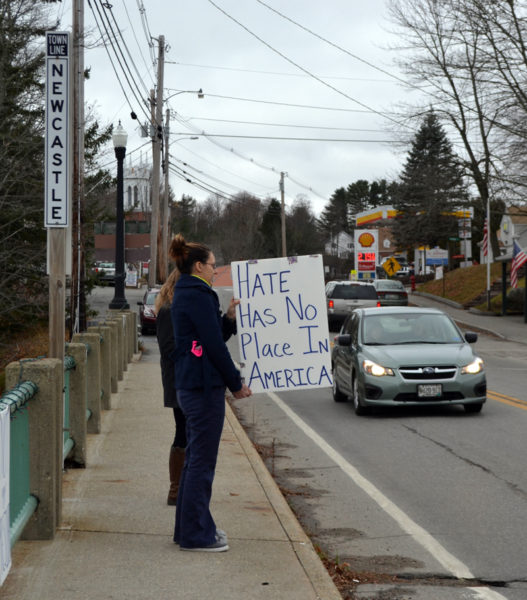 Rebekah Oliver, of Damariscotta, holds a sign that reads “hate has no place in America” on the Damariscotta-Newcastle bridge Saturday, Nov. 26. Oliver started the peaceful demonstrations after the election. (Maia Zewert photo)

“I started these peaceful demonstrations following Donald Trump’s election after I felt such sadness, fear for the future, and a heavy weight settling onto my shoulders as I contemplated what a Trump presidency could mean to my freedoms; the freedoms of my children; the freedoms, safety, and security of many of my friends and family members; and the future of our beautiful world,” Oliver said in a message after the demonstration.

“I needed to do something in my town, in my community … I wanted to show my children how to put their beliefs into actions and the importance of standing with courage and passion for equality for all,” Oliver said.

Oliver was joined by other local residents during the hour-long protest. Phoebe Pugh, a member of the Lincoln Academy Civil Rights Team, said she wanted to give a voice to those who may feel powerless in the wake of the election.

“I want to bring hope and be a voice for the future,” Pugh said.

For John and Carol Hartman, of Newcastle, the demonstration was a chance to publicly express their opinion on the election results, a first for the couple, John Hartman said. “I am still in disbelief that this happened,” John Hartman said.

The protestors received a variety of responses from drivers and passersby. Some honked and gave a thumbs-up while others yelled.

“There were far more in support than not,” Carol Hartman said.

Anyone is welcome to join the demonstration, Oliver said. She plans to be on the bridge from 2-3 p.m. every Saturday.