In the wake of violence at a large gathering of white nationalists and counterprotestors in Charlottesville, Va. the weekend of Saturday and Sunday, Aug. 12 and 13, area residents held two vigils Monday, Aug. 14 as demonstrations against racial hatred.

In response to the city’s plan to remove a statue of Confederate Gen. Robert E. Lee, white nationalists gathered Saturday, Aug. 12 for a “Unite the Right” march in the college town. The march drew counterprotesters from Solidarity Cville, a network of local activists and clergy members, according to The New York Times.

Later Saturday, James Alex Fields Jr., 20, of Maumee, Ohio, drove his car into a group of counterprotesters, killing Heather Heyer, 32, and injuring dozens, according to The New York Times.

As a local response to the violence, area residents gathered to “speak out against the hate,” Lincoln County Democratic Committee Chair Chris Johnson, of Somerville, said. Johnson participated in a vigil at Veterans Memorial Park in Newcastle on Monday afternoon.

“What we saw over the weekend has a lot of people upset. This is the evil our grandparents died in World War II fighting against, and there’s just no place for that to be here today,” Johnson said. 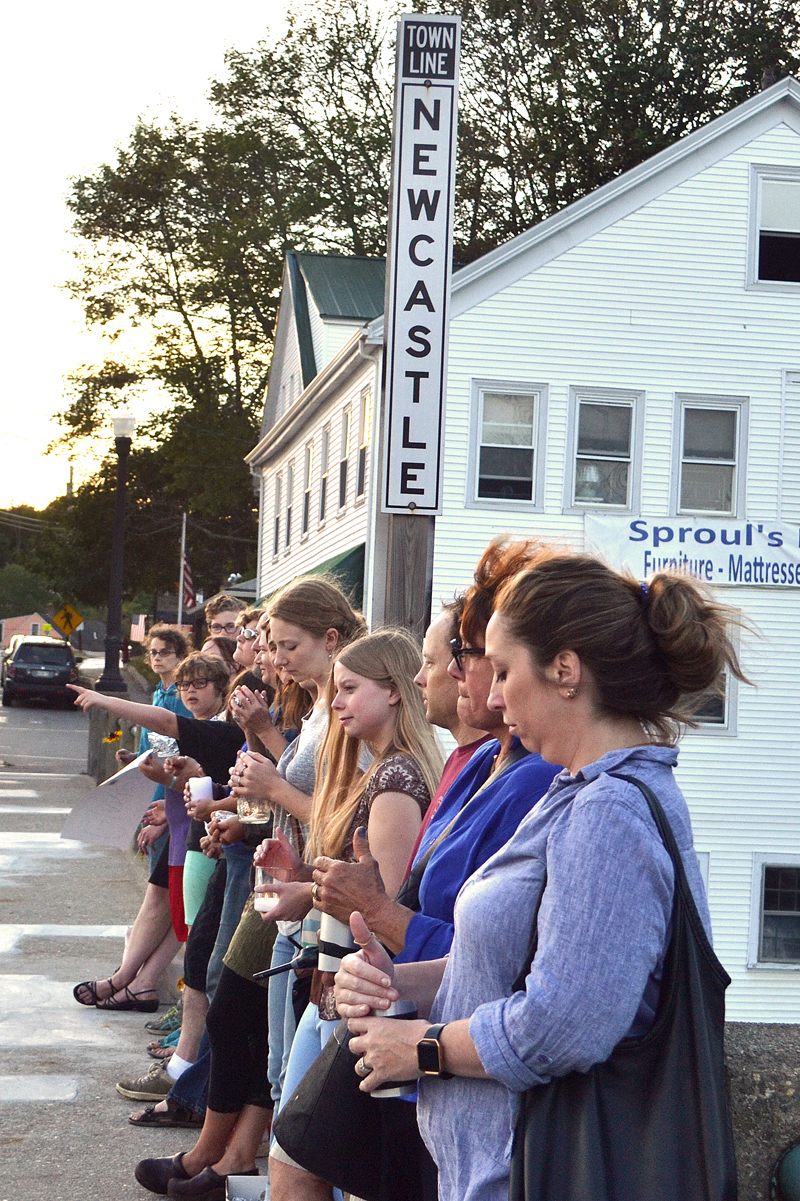 Area residents hold a candlelight vigil on the Damariscotta-Newcastle bridge the evening of Monday, Aug. 14 in response to the events in Charlottesville, Va. on Saturday, Aug. 12. (Maia Zewert photo)

For more than a year, People United Against Racism, a group that aims to promote racial understanding, has been holding silent vigils in the park every Monday to protest racism. The group grew out of a series of discussions between members of The Second Congregational Church in Newcastle and the Midcoast Unitarian Universalist Fellowship, which meets in Damariscotta.

“Our constant presence every single Monday has been a visible sign to our community that we are committed to responding to the presence of white supremacy and racism and saying ‘Not here, not now, not ever,’” said the Rev. Erika Hewitt, minister of the Midcoast Unitarian Universalist Fellowship.

By laying the groundwork with their weekly presence, People United Against Racism demonstrated to the community that the park is a place where people can gather when they feel powerless or are unsure of how to respond to current events, Hewitt said.

“They know we’re there on Mondays, and when horrific incidents occur like what happened over the weekend, they know where they can go,” Hewitt said.

Typically between six and 14 people participate in the Monday vigils, Hewitt said, but the Aug. 14 gathering drew more than 70 people.

“We live in a community where people understand that inaction and silence make the problem of racism worse,” Hewitt said. “We have to talk about it and we have to act against it, because silence is complicity.”

Later Monday, a candlelight vigil took place on the Damariscotta-Newcastle bridge. Iris Stanley, of Walpole, organized the event as a way to spread compassion in the aftermath of “an overt act of domestic terrorism,” she said.

Thomas Young-Bayer, of Damariscotta, said the vigil was important to show people in the community that, “while there’s ugliness in the world, it has no place in our community.”

“There’s a lot of intolerance in the world, and there are people who might feel marginalized, and I think it’s important for us to say, as a community, that everyone is welcome,” Young-Bayer said.