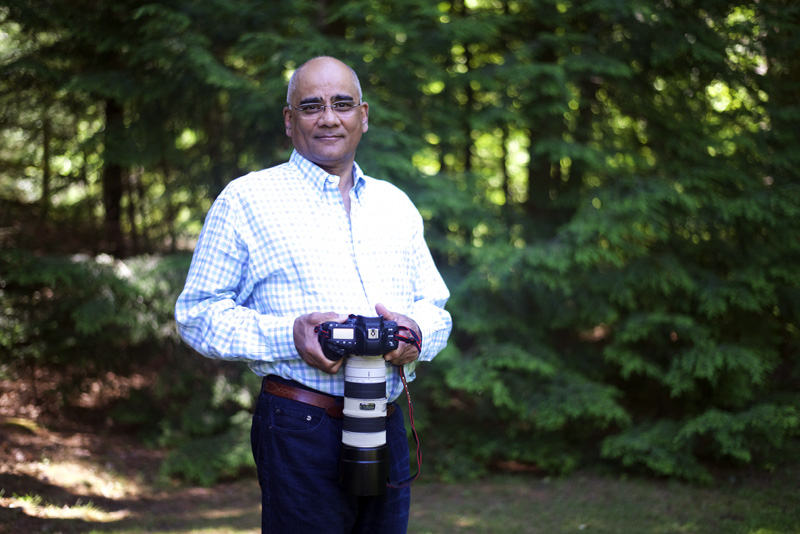 Rifat Zaidi, an orthopedic surgeon at LincolnHealth’s Miles Campus in Damariscotta, is picking up his camera to give girls in rural Pakistan the opportunity of education.

Zaidi is selling his photography to raise funds for the IDRF/ROF Girls Primary School in Basti Awan, a joint project by the Rawalpindi Medical College and the International Development and Relief Foundation of Canada.

Zaidi is originally from Pakistan. He moved to Newcastle in 2002 with his wife, Tasneem. They have two children, both of whom graduated from Lincoln Academy.

Zaidi, who has been taking photos for many years, decided to sell his photography to raise money for the school, which he and other alumni of his medical school started after a flood in 2010.

His photography features scenes from all over the world, as well as many from Lincoln County.

This is not the first time Zaidi has lent his skills to help people in Pakistan.

In October 2005, a devastating earthquake hit the country.

Zaidi, a graduate of Rawalpindi Medical College and a fellow of the Royal College of Surgeons of Edinburgh, went with other physicians three times to operate on the wounded.

The foundation took on multiple projects in Pakistan, such as establishing a burn center and a dialysis center.

In the summer of 2010, Pakistan’s Indus River, one of the longest rivers in Asia, flooded.

“It just gushed out. I think 25 percent of the area, land mass, in Pakistan was under water,” Zaidi said. “At that time, at our foundation here, we decided that we should help do something.”

The foundation selected an area on the east bank of the Indus River and built 322 homes.

“At that time, we realized that there were no schools for girls in that area. So we built two schools from scratch,” Zaidi said.

The foundation still runs one of the two schools, the girls school in Basti Awan. The school currently serves 149 girls and goes up to sixth grade.

Zaidi said the goal is to bring the school up to 10th grade, which is the equivalent of high school senior year in Pakistan.

“We are adding classes as we go,” he said.

Bringing the school to 10th grade would give the girls the opportunity to take the secondary school certificate examination, similar to the SAT or final exams.

“Before the school, I was quite interested in actually opening a medical facility, and I put that on the back burner, because I think education is so much more important. It’s a more long-term investment. I’m quite passionate about it,” Zaidi said.

In November 2016, Zaidi had a six-week exhibition of his photography at LincolnHealth’s Miles Campus.

“Raising money is not easy. You can’t raise money in big chunks, because most of the money is raised in smaller change. So it’s the strength of the number of people donating, instead of the one person donating a big chunk,” Zaidi said.

Zaidi visited the school last year and met many of the students.

“These girls are doing very well,” Zaidi said. “They were all very happy, and really thankful that somebody was doing this for them.”

This year, the school has started teaching physical activities and sports.

Zaidi said the school will be divided into a four-house system, so the students can compete against each other.

All profits from the sale of Zaidi’s photographs go directly into the school. The money helps pay the salaries of seven teachers and three support staff – an aide and two security guards. Funds also go toward books, uniforms, sweaters for the winter, and shoes and socks every year.

“We can’t find teachers locally, so they have to come from another town. So we have to provide them transport money, so that they can take the transport from 15 miles away, which is actually a very long distance,” Zaidi said.

“It’s an ongoing thing. It’s a bottomless need,” Zaidi said. “For a small amount of money, you can actually do a lot more in the Third World.”

Zaidi has also written a cookbook featuring recipes from Pakistan. The book has not been printed yet, but Zaidi said that when it is ready to be sold, the funds will also go to the school.

Donors who would like their money to go toward the school may write a note with the donation. The school also has a Facebook page, RMCOF Girl’s School.

Zaidi’s photography is also on Facebook and Instagram, and he can be reached at razmatas@hotmail.com. Purchase options include prints on aluminum, or having photos made into a canvas bag or phone case.

“At least we’ll change the lives of these 149 girls and their families when they become adults and they have their own homes,” Zaidi said.