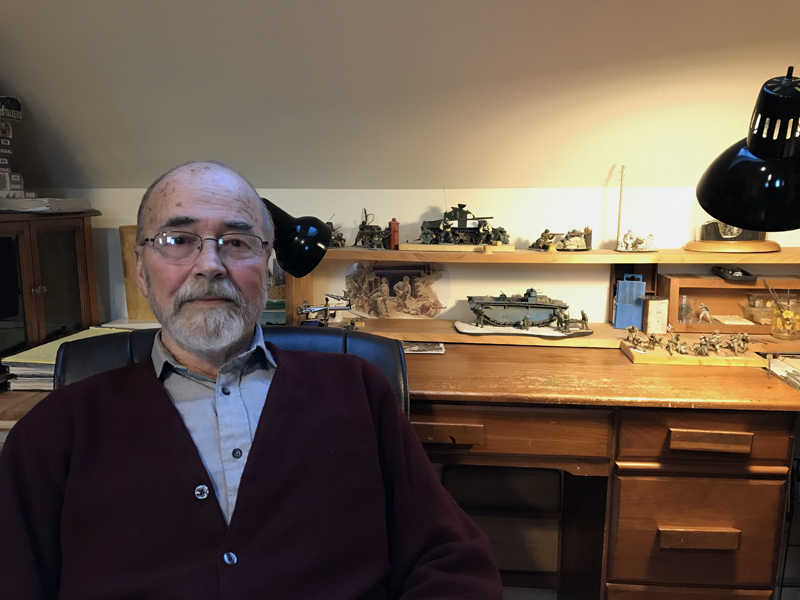 Ed Strausberg sits next to parts of an incomplete diorama of Saipan on his desk at his home in Round Pond. Unable to complete the work due to a tremor, he hopes to find someone willing to finish the job. (J.W. Oliver photo)

His work stalled by a tremor, a Round Pond man who builds World War II dioramas hopes someone will help him finish one more project.

Ed Strausberg has dioramas on display at the U.S. Military Academy at West Point and the U.S. Naval War College in Rhode Island.

He has many more pieces in institutions and private collections, but wants to complete this last project – a series of six dioramas depicting the U.S. Marine Corps in the Pacific theater – out of a love of history and a desire to share it.

Strausberg grew up in Rockland County, north of New York City. An early field trip in elementary school was to the Revolutionary War battlefield at Stony Point, on the Hudson River, where he saw a diorama of the battle.

Fascinated, the young student immediately started thinking about how he could make the diorama more realistic. Soon he was making his own. 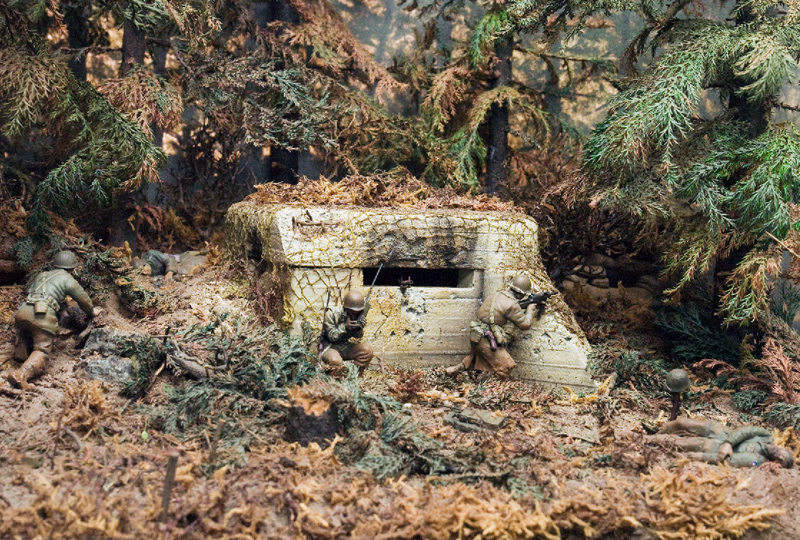 “I’ve been crazy about history since the fourth grade,” he said, when his teacher “told us to look at history objectively and keep in mind which side is writing it.”

He graduated high school in 1965 and volunteered for the U.S. Marine Corps, motivated by a desire for adventure and by John F. Kennedy’s famous call to service: “Ask not what your country can do for you, ask what you can do for your country.”

Strausberg was an infantryman in Vietnam in 1966 and 1967, a member of A Company, 1st Battalion, 5th Marine Regiment, 1st Marine Division.

“When I went to Vietnam, I expected a noble war that made sense,” he said. He found something different.

“If people want to understand the Vietnam War, all I can tell them to do is to watch Ken Burns,” he said.

He served in the Marines until 1969 and started to build dioramas again soon thereafter, with a focus on World War II. He returned to New York and worked as a bartender, liquor salesman, and waiter. 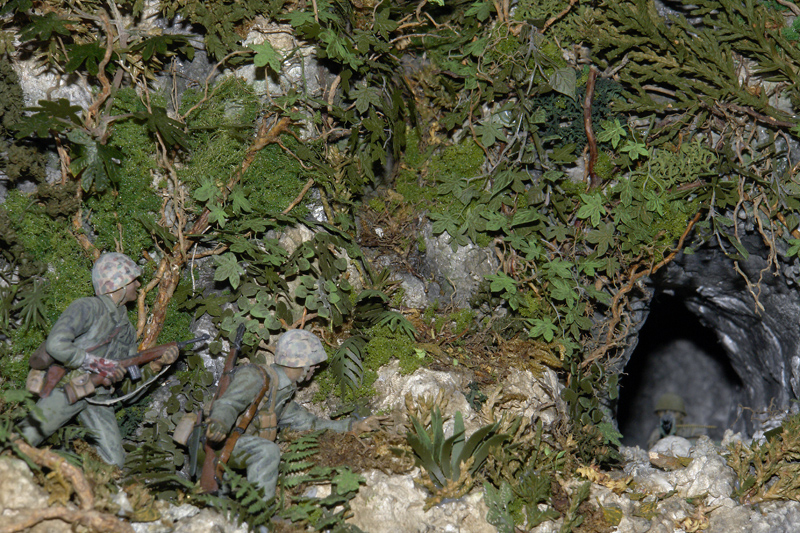 U.S. Marines, one with a grenade in hand, approach a Japanese machine gunner in a cave on Peleliu in a World War II diorama by Ed Strausberg. (Jack Lane photo/courtesy Ed Strausberg)

“I would build pieces and sell them here and there and I did a couple of architectural models,” he said.

The dioramas were a form of therapy for Strausberg after his experiences in combat. “It was a way for me to convey my inner demons without really shouting them,” he said.

His research and work on World War II was also a reminder. “Somebody always has it worse than you,” he said.

Strausberg’s dioramas both honor “the bravery and commitment” of U.S. troops and serve as a warning about the cost of war.

“It was a way for me to try to explain to people that, once you send your youth to war, nobody comes back the same,” he said.

A big moment in Strausberg’s career was a commission from West Point. He built three dioramas for the storied institution: of Barbarossa and Stalingrad, in Russia; and El-Alamein, in Egypt. 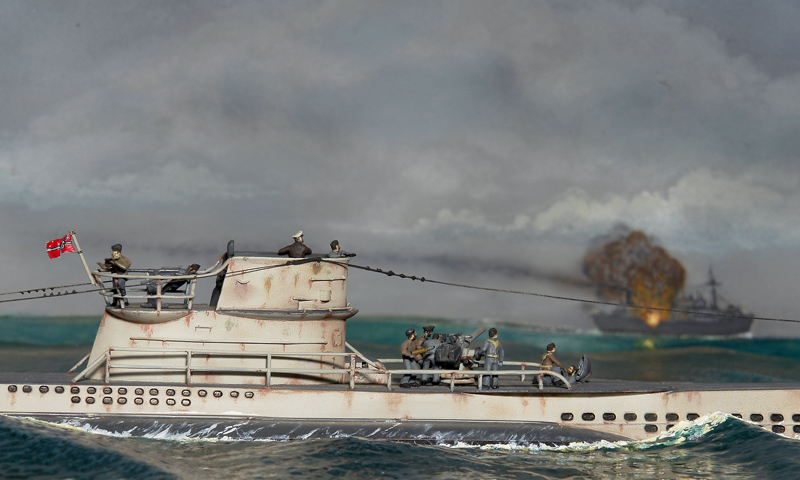 He first moved to Maine when his mother-in-law left a house in South Bristol to his wife. They moved back to New York for a time, then moved to Maine permanently around 1985.

He tended bar and drove a hearse before retiring on disability in 1999. All the while, he continued to make models.

He makes the dioramas with an assortment of materials. For combatants, he starts with figures from kits, then modifies them with tiny tools and plastic filler to achieve certain poses.

For a building, he might use Styrofoam with a coat of plaster. For ceiling tiles of a certain style, corrugated cardboard. For iron railings, paperclips. To make rubble, he breaks up cement with a hammer.

For trees, he turns to the real thing. “After a rainstorm in the spring, if you pull up young trees and get the roots on them, you’ll have fine fibers on them – it looks like a tree,” he said. 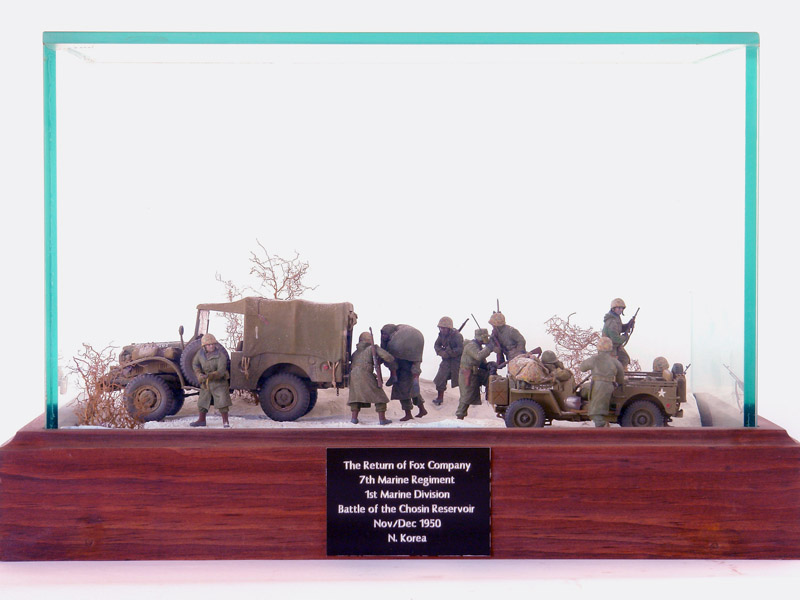 A diorama by Ed Strausberg depicts the U.S. Marine Corps at the Battle of the Chosin Reservoir in the Korean War. (Jack Lane photo/courtesy Ed Strausberg)

He estimates that he has made 50 or 60 dioramas over the years, of World War II as well as a few of the Korean War. His non-military work includes models of local lighthouses and other landmarks, like the Miles tower in South Bristol.

He worked on his current project, the series on the Marines in the Pacific, off and on for three or four years. He hopes the dioramas, once complete, will become a traveling exhibit, going to libraries and schools.

Three of the six are complete – Guadalcanal, Tarawa, and Peleliu. Strausberg is halfway through another, Saipan, and has two more to go: Iwo Jima and Okinawa.

After a health scare a couple of years ago, he developed an “essential tremor.”

A neurological disorder, essential tremor “causes involuntary and rhythmic shaking,” according to the Mayo Clinic. 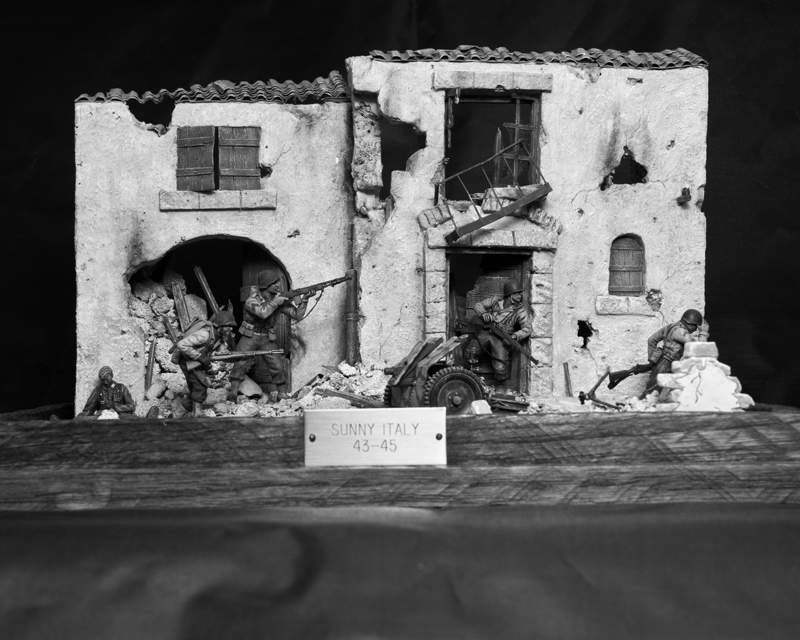 An Ed Strausberg diorama depicts the U.S. Army’s 442nd Regimental Combat Team in Italy. Many of the team’s soldiers were Japanese-Americans whose families were in U.S. internment camps. (Jack Lane photo/courtesy Ed Strausberg)

“It can affect almost any part of your body, but the trembling occurs most often in your hands – especially when you do simple tasks, such as drinking from a glass or tying shoelaces,” according to the clinic. “Essential tremor is usually not a dangerous condition, but it typically worsens over time and can be severe in some people.”

The tremor renders Strausberg’s hands useless to render the fine details of his dioramas. Now 72, he wants to see his last big project through to completion.

Someone who builds model trains might make a good candidate for the work – or anyone with time and steady hands.

“I can talk them through all this,” Strausberg said. “Once you know how to do it, it’s really just patience – and not touching stuff before it’s dried!”