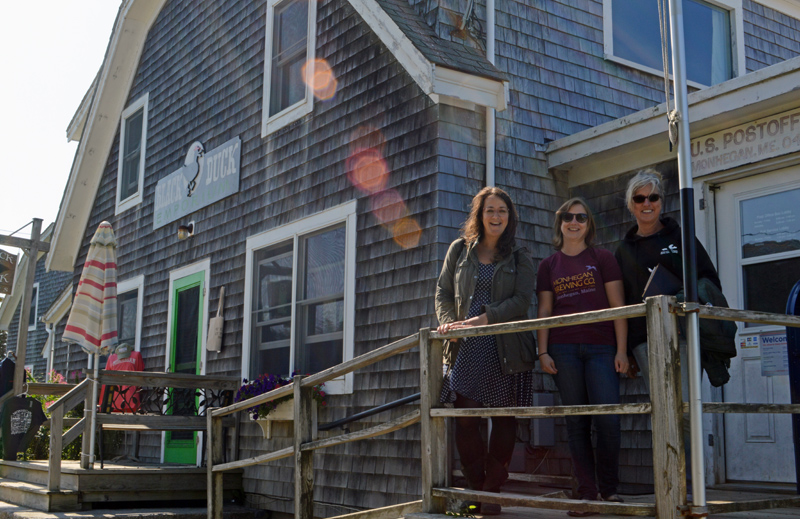 As the number of Maine islands with year-round populations dwindles, the Monhegan Island Sustainable Community Association is striving to ensure year-round families can afford to live on the island and keep its culture alive.

According to the association, the number of Maine islands with year-round populations has dropped from more than 300 to 14 over the last 100 years.  Once thriving cultures made up of fishermen, farmers, teachers, and artists have faded into history.

The association’s mission since its founding in 2002 has been to preserve this unique community for residents and visitors alike by buying homes or land and making it available to year-round residents looking for a permanent home at an affordable price.

A covenant in the deed limits the amount of appreciation on the property or house to steady price increases over the years.

In recent years, the group’s responsibilities have expanded well beyond just buying and selling homes to committed year-round residents at a significant discount.

“The workload has expanded quite a bit. … When (the organization) was first formed, they were purchasing homes and then making those homes available directly for sale to island residents. Now, not only has the number of properties expanded quite a bit, but there’s more different types of arrangements that we have,” Co-president Rebecca FitzPatrick said in an Aug. 25 interview at Monhegan Brewing Co., which was built on a property the association owns.

FitzPatrick said the land trust now also manages residential and commercial rental properties and has facilitated some alternative financing and rent-to-own arrangements in order to put people in homes, in some cases acting effectively as a landlord.

“Every single time somebody in the community comes to us with a project or a need, we’re having to sort of start from the beginning in terms of being creative and getting people into the space they need,” FitzPatrick said.

The organization’s current focus is on a pair of properties referred to as the meadow lots that were acquired in 2012. Both lots needed a septic system, electricity, and a well in order to become buildable.

Feibusch said the goal is to complete a working infrastructure on each lot so homes can be built on the properties.

She said that so far, a well has been drilled, a pump installed, and electricity has been brought to the wellhead. The group is still raising funds to complete the installation of a septic system to share between both lots.

Co-president Joan Brady said a quote for approximately $66,000 was received to install the septic system. She said contracted work usually has added costs because of the difficulty of bringing materials to the island.

FitzPatrick said the group is attempting to raise $100,000 for the septic installation to cover any unforeseen costs that could arise. Over half of that money has already been raised. 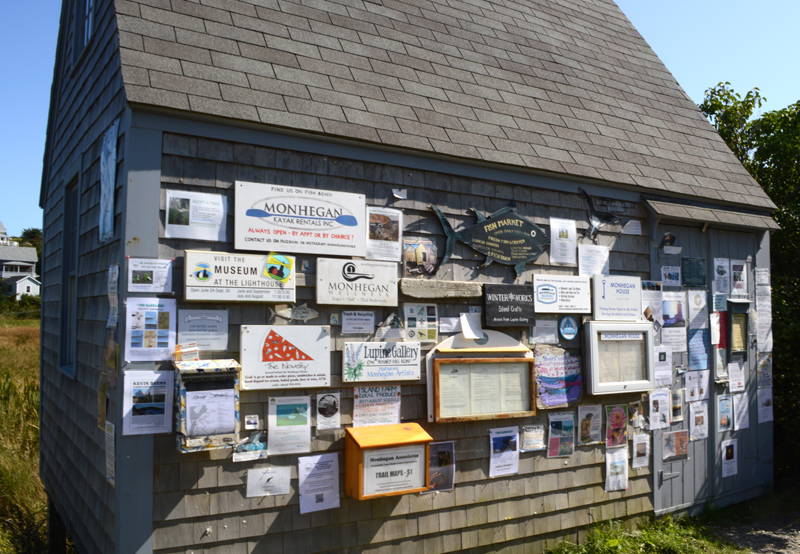 The rope shed/community bulletin board is one of nine buildings the Monhegan Island Sustainable Community Association owns. (Evan Houk photo)

FitzPatrick said another focus is on raising funds to perform deferred maintenance on many of the rental properties that are managed by the group.

The event was held at the Monhegan Schoolhouse and featured artwork, gift packages, and Monhegan memorabilia for participants to bid on. A silent auction was available online to bid on the items between Aug. 5 and the day of the live auction.

The Monhegan Island Sustainable Community Association – or MISCA, as islanders call it – was founded in 2002 in response to increasing real estate prices and a dip in year-round residents. MISCA now owns 11 properties on the island, including the two meadow lots.

“A lot of the stuff that we all enjoy in the summer wouldn’t happen if there wasn’t a year-round community. … Almost all of the businesses are owned by people who live here year-round,” Feibusch said.

The association purchased the old Monhegan Store building shortly after its formation in 2002. The building now serves as a focal point of island affairs, housing the post office, the town office, a laundromat, and the Black Duck Emporium gift shop.

Among its other properties are the rope shed/community bulletin board; Snug Harbor, which houses a family year-round and the L. Brackett & Son Provisions grocery store; the Jacobson House, where Angela Iannicelli and Travis Dow live and run their lawn care business; and the Underlook and Overlook year-round single-family housing units.

The group also owns a property on Lobster Cove Road, where the first new construction on one of its properties occurred. Year-round residents Matt and Mary Weber built their house on the property and opened Monhegan Brewing Co., now a popular island destination, in 2013.

During the interview with Brady, Feibusch, and FitzPatrick on a Sunday afternoon, the brewery was bustling, with close to 40 visitors.

“The housing is a stumbling block for so many people. You can’t just rent a year-round apartment and test the waters and see how it goes. … There is a seasonal income that the cottage owners just can’t pass up,” Brady said, referring to how much more lucrative it is to rent cottages seasonally to tourists than sell or rent to year-round residents.

According to the group’s website, miscainfo.org, the cost of housing on the island has more than doubled since 2014.

Brady and FitzPatrick explained that when first moving to Monhegan, most people have to endure what Brady referred to as “transient housing,” often for a lengthy period of time, before finding a permanent situation.

Brady said many longtime island residents consider this a rite of passage and a way for someone to “pay their dues” and decide if they are truly committed to staying on Monhegan.

“I also think it’s at the point where it’s prohibitive,” Brady said.

Fitzpatrick said she has lived in Maine since she was in high school. She moved to Monhegan about six years ago and has yet to find a permanent place to live.

“This is my seventh summer. I move every season,” she said. “I move five times a year in order to stay on the island.”

Living year-round on Monhegan is not for the faint of heart. Most residents work several jobs to make ends meet and supplies can be hard to come by, especially in winter, when ferries are routinely canceled because of weather.

Brady said the cost of groceries and goods is easily 30% higher because of the added transportation costs. 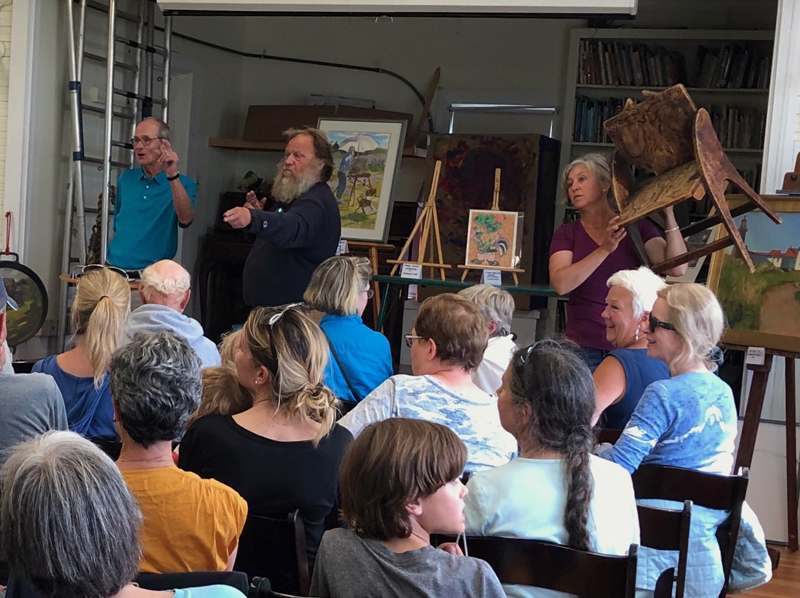 The cost of living and logistical challenges reinforce the need to continue to incentivize people to move to Monhegan and stay, according to Brady.

Brady, Feibusch, and FitzPatrick each have other jobs that keep them busy, in addition to their responsibilities at the land trust. All three women are artists and each works in a different medium. Brady is a classical realist painter, FitzPatrick works with paper as a collage artist, and Feibusch works with furniture, upholstery, and block printing.

Brady pointed out her art on one of the brewery’s bottle labels.

Feibusch pointed to the Monhegan Brewing Co. T-shirt she was wearing as an example of her work.

Brady also works as an online educator and as a gardener of the island’s ornamental flowers.

Feibusch said a federal grant application for installation of broadband internet access on Monhegan is pending and is expected to be decided within two months. She said that if the grant is awarded, it would be a huge boost for residents, since a large number, including Brady, work remotely over the internet.

Brady said the addition of broadband would certainly help in her profession as an online educator of Maine children. She currently has two internet service providers in the event one service goes out.

FitzPatrick works full-time at the front desk of The Island Inn during the tourist season and leads the effort to maintain the nearly 12 miles of hiking trails as the wildlands coordinator for Monhegan Associates, another land trust on the island. In the spring and fall, she works as a gardener.

In addition to her modest stipend as secretary, Feibusch makes a living as the postmaster for Monhegan and as co-owner of Monhegan Coffee Roasters.

Feibusch’s husband, Mott Feibusch, was elected first assessor of Monhegan Plantation in May.

The annual report for 2018 shows 76 registered voters, five pupils in the one-room elementary school, four marriages, two births, one death, and one arrest, which was a domestic disturbance. Feibusch said there are likely around 200 seasonal residents.

Brady said Monhegan is at a critical point, as a lot of other islands off the Maine coast transition to seasonal-only populations, but she sees hope in Monhegan’s population.

“We also have a lot of momentum growing with a lot of people who love to come here and bring their skills and talents,” Brady said.

FitzPatrick and Feibusch agreed with Brady that interest in Monhegan is growing.

“People are just trying to find a way to stay,” Brady said.