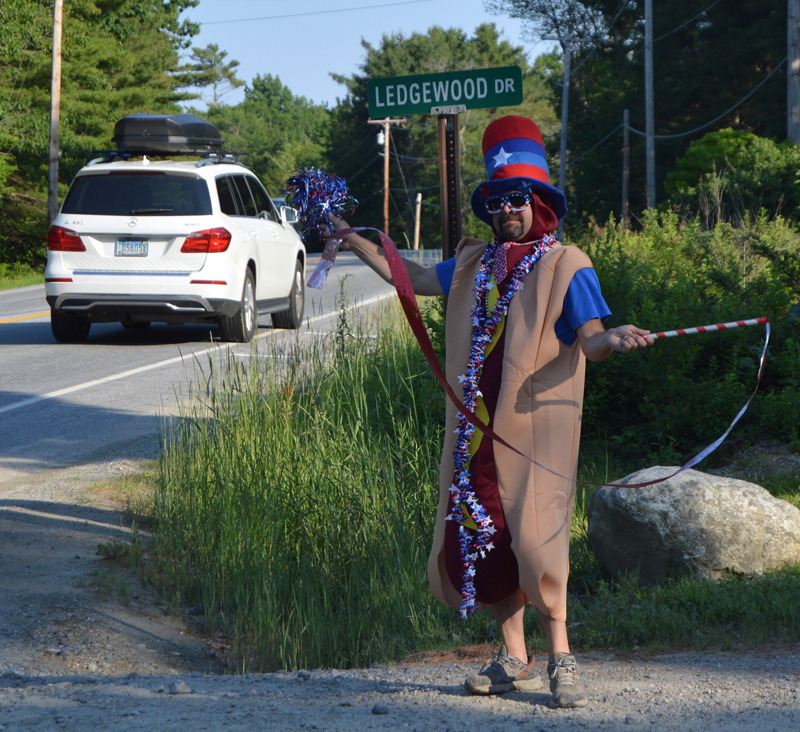 The men’s winner of a hot dog-eating contest in Bristol polished off 13 dogs after a steak dinner, while a tie in the women’s contest forced an eat-off, all as part of a fundraiser to send kids to camp at the CLC YMCA.

The 11th annual event at Stackhouse Landscaping in Bristol Mills on July 3 also included a pie-eating contest, a paintball target game, a dunk tank, a Mickey Mouse bounce house, face-painting, and an excavator set up to allow kids, with the help of experienced operator David Little, to pick up and drop various items into buckets of water with the large claw. The proceeds send local children to camp through the CLC YMCA and Camp Knickerbocker in Boothbay.

The $5 entry fee included unlimited food and beverages. Tickets could be purchased to play the various games set up.

David Stackhouse, owner of Stackhouse Landscaping and organizer of the event with his wife, Amy Stackhouse, estimated that about 300 people turned out and that the fundraiser will rake in over $20,000 by the time all the checks inspired by the event arrive in the mail.

David Stackhouse said about half of the money comes from the entry fee and ticket sales, while the other half comes from donations, either the night of the event or after the fact.

Local businesses donated everything for the event, so 100% of the proceeds go directly to camp scholarships.

Half of the funds will go toward scholarships for the summer of 2019, and half will go into the Loren St. Cyr endowment fund at the CLC YMCA. The interest from the fund will continue to send kids to camp if the Stackhouse Landscaping event comes to an end.

David Stackhouse said the principal of the fund, now approximately $122,000, cannot be touched, to ensure the interest can sustain funding for camp scholarships.

“If we tell the story and how we’re raising the money, I want a 5-year-old to understand it,” David Stackhouse said of the simplicity of the event’s intention.

Stone Cove Catering had a booth set up with three kegs of Allagash beer, wine, and hot dogs.

Todd Maurer, co-owner of Bristol Mills-based Stone Cove Catering, said the company brought 1,000 hot dogs in preparation for the contest and for feeding everyone in attendance.

Shuck Station, of Newcastle, set up an oyster bar with three types of oysters, donating a total of 450 mollusks to the cause.

The Dyer Neck Band provided live entertainment for the entire night, free of charge. The band played an energetic mix of old and new country, as well as some rock, like a country version of Guns N’ Roses’ “Sweet Child of Mine.”

David Stackhouse said the fundraiser was inspired by the untimely death of 20-year-old Loren St. Cyr, a former employee of Stackhouse Landscaping who died in 2008.

He said that before 2008, employees at the landscaping company would get together and have a hot dog-eating contest just for fun.

After St. Cyr’s death, David Stackhouse decided: “Let’s do this and let’s charge a little something to come in.”

At the edge of Ledgewood Drive on July 3, a dancing man in a hot dog costume, who wished to be referred to only as “Hot Dog Man,” waved to vehicles passing on Route 130, trying to entice passersby to join in on the fun.

Olivia Swartzentruber took the pie-eating title. According to her mother, Easter Swartzentruber, Olivia looks forward to the contest all year.

Eleven young contestants lined up at a table set up on a trailer serving as a makeshift stage and shoved their faces into their mini blueberry pies, chomping wildly.

A key rule of the contest is that hands cannot be used. Whoever ate the most in three minutes was the winner.

Chute said he had eaten a large steak dinner before coming to the fundraiser, not expecting to participate in the contest, and was drinking Allagash White beer while eating the hot dogs. His friend challenged him to enter.

The women’s champion was Sarah Burgin, last year’s defending champion, visiting from Columbus, Ga., who ate a total of eight hot dogs. The women’s race came down to the wire, with a hot dog “eat-off” necessary to determine the winner.

Burgin faced off with another challenger, who had also eaten seven hot dogs in the allotted time. The “eat-off” rules stated that whoever ate and swallowed one more hot dog first would be the women’s champion.

Burgin won by a swallow.