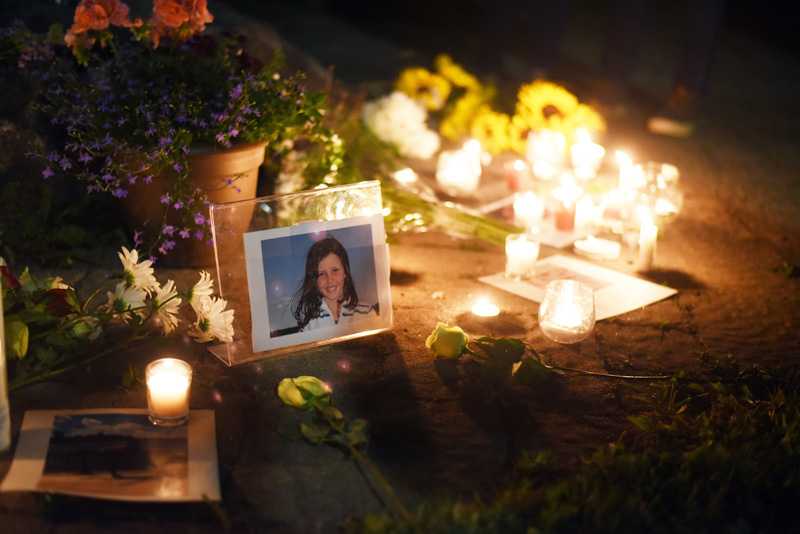 A photo of Isabelle Manahan is surrounded by candles and flowers during a vigil at Great Salt Bay Community School in Damariscotta on Monday, June 11. (Jessica Picard photo)

Isabelle Manahan’s bright smile and ability to bring joy to others were mentioned often during a candlelight vigil honoring her life Monday, June 11.

Manahan, a freshman at Lincoln Academy, died in a car crash the afternoon of Friday, June 8, shortly after school let out for the summer. Three other girls sustained non-life-threatening injuries.

The vigil was held in the courtyard of Great Salt Bay Community School in Damariscotta, where Manahan attended elementary school. Hundreds of people attended, hugging and exchanging stories of the 15-year-old.n

Manahan was the daughter of Bryan Manahan and Carrie Levine, of Newcastle, and sister to Aidan Manahan.

“Isabelle Manahan was one of the gems,” GSB Principal Kim Schaff said at the beginning of the gathering, which Schaff said showed how “one life can touch us all.”

Various teachers then read some of Manahan’s writings from her time at the school, ranging from poetry to her favorite memories and activities.

“We have Isabelle’s words captured for us,” Schaff said. “They provide lessons for us all … we will continue to learn from her, and from each other.”

“She did everything she could to have her experience here documented,” teacher Anne Plummer said of the writings.

Manahan’s fourth-grade teacher, Chris Coleman, said he began looking for photos of his 2012 class, and even though he takes hundreds of photos every year, he could only find two photos from that class.

The first was of a young Manahan using her whole body in an attempt to wield a shovel, and the second was a photo of one of her poems.

Coleman then read the poem by a 9-year-old Manahan, titled “Where Do Dreams Go?”

“Where does a dream go after it fills you with its beauty?” the poem begins. “Does a dream just go straight back to heaven?”

Second-grade teacher Lorna Fake read an essay by Manahan about her love for skiing.

“Every time I saw her she smiled into me … like her smile was just for me,” said Jen Conover, who coached Manahan in skiing starting when she was 6 years old. “Underneath that smile was pure grit.”

Conover also had Manahan in her Ocean Explore Camp, a five-day girls summer camp that combined ski training and seamanship.

“We would meet at the harbor, run to the base of Mount Battie, then speed-hike up to the tower at the summit … Izzy could have always been far ahead of the group, but never showed it or competed that way … so I had to put rocks in her backpack to challenge her,” Conover said.

Manahan’s music instructor at GSB, Kaity Newell, read from another essay. “I will always play violin, it’s part of me,” Manahan wrote in the piece.

Kaity Newell, along with her daughter Helen Newell and another student, Aiden Jacobs, played some of Manahan’s favorite tunes, such as “The Irish Washerwoman.” 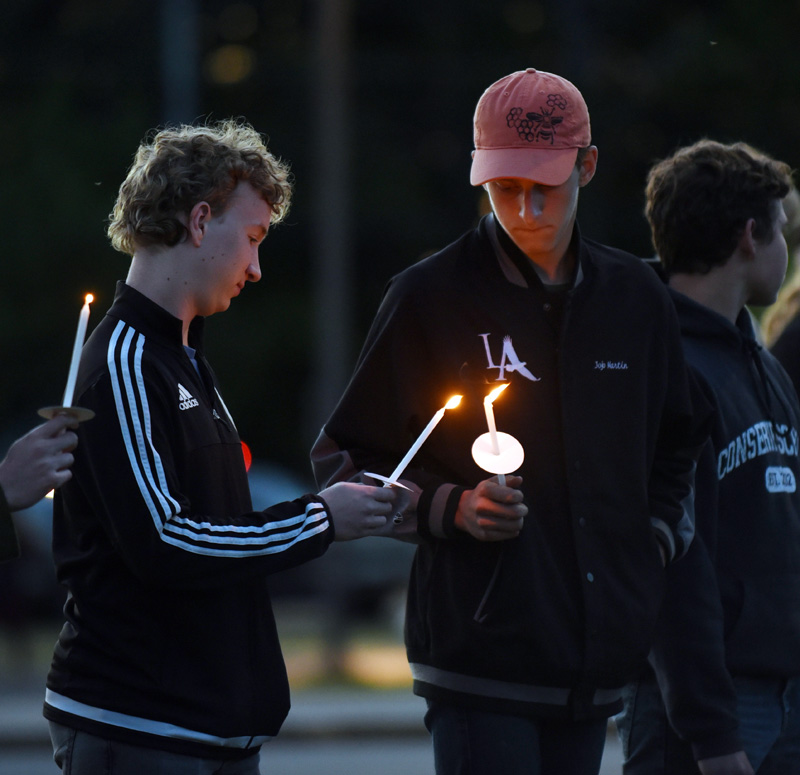 Manahan had a love for dance, and had been studying at The Ballet School in Topsham with Elizabeth Drucker. Manahan wrote that “Dance is a way to lose yourself … ballet is a way to speak.”

“She embraced opportunities as a chance for something wonderful to happen,” Drucker said. “She was one of those girls that you just knew would go far in life because she had the head and the heart to excel.”

Third-grade teacher Jennifer Gregg asked the crowd for adjectives that described Manahan, receiving answers such as “beautiful,” “kind,” and “creative.”

She read a piece by Manahan on her love for climbing Mount Battie in Camden, which she had been doing all her life.

The seventh- and eighth-graders at GSB planned to hike Mount Battie in memory of Manahan on Wednesday, June 13.

“Each person in my life is a role model to me in their own way,” Manahan wrote in an essay entitled “Gratitude.”

Many of Manahan’s friends, some of whom were mentioned in her writings, were in attendance.

“She was such a beautiful dancer,” he said.

Martin often volunteered to be her dance partner, saying he was “not qualified” but “wanted to be.” 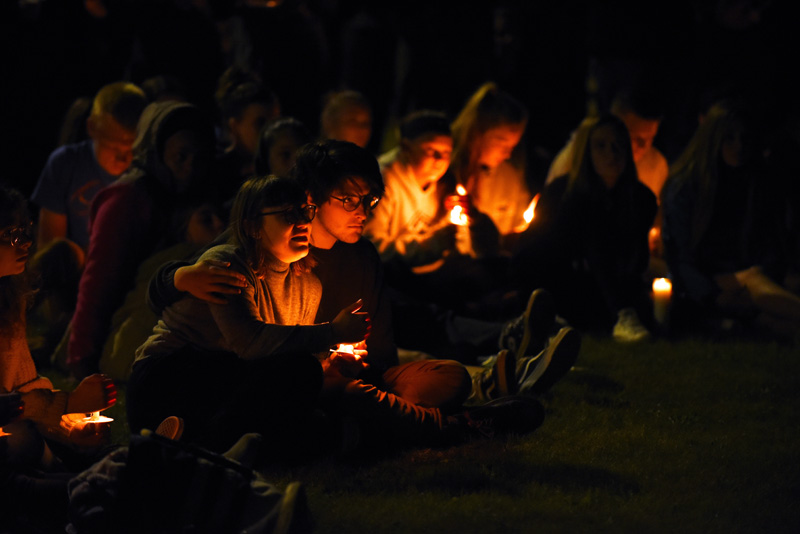 Martin attended Lincoln Academy’s prom with Manahan in May. “We were in the middle of all of it … she was an energy unmatched by anyone else in the room,” he said.

Martin shared a story of how, during a power outage last fall, he and Manahan played the soundtrack to “West Side Story” until the battery-powered speaker died.

Jenny Mayher, LA’s director of communications and community engagement and Martin’s mother, said Manahan’s many passions and interests meant she “crossed paths with so many people in the community.”

“She was such a life force … she was always moving forward,” Mayher said.

Riley Stevenson, who moved to the area about five years ago, said that “no one helped include me more than Isabelle.”

“She was like a little sister to me,” LA junior Lucy Bradbury said. “She had the brightest smile that you could imagine.”

Bradbury said Manahan was nurturing, and always put others before herself.

In the last piece of writing shared, written when Manahan was 14 years old, she wrote, “I strongly believe that everything happens for a reason.”

By the end of the night, a photo showing a smiling Manahan was surrounded by glowing candles and flowers.

There will be a celebration of Manahan’s life at 11 a.m., Thursday, June 14, at the Damariscotta River Association, 110 Belvedere Road, Damariscotta.

GSB will provide transportation for seventh- and eighth-graders to attend the celebration of life with parental permission.

According to a letter to parents from Schaff and Assistant Principal Kami Peaslee, GSB’s social worker and guidance counselor will be available for students and parents this week.

The letter also listed the phone number for Transitions, Mid Coast Grieving Children’s Program, which is 721-9702.