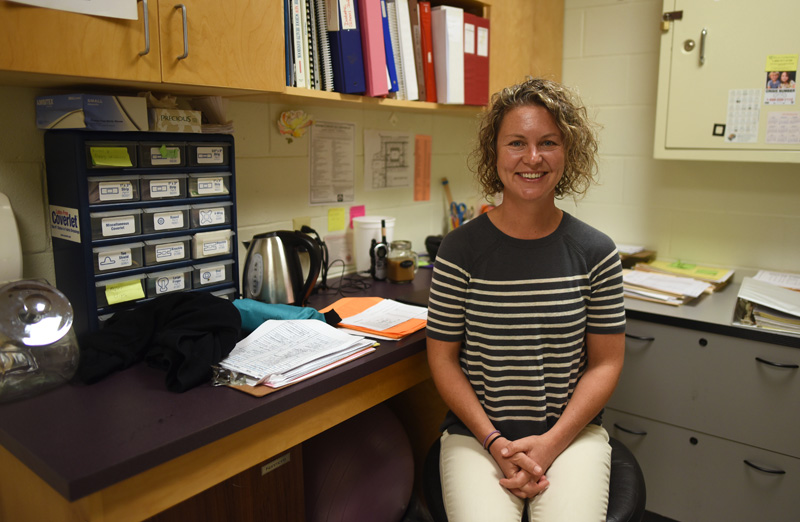 Kerri Lilly in her office at Great Salt Bay Community School. Lilly, who has a background as a trauma nurse, works as the school nurse at GSB and in the intensive care unit at LincolnHealth’s Miles Campus. (Jessica Picard photo)

Kerri Lilly, a nurse at Great Salt Bay Community School and LincolnHealth, has received the Sister Consuela White Spirit of Nursing Award from the Maine chapter of the American Nurses Association.

Lilly, of Bremen, has been a nurse for 21 years and began working at LincolnHealth in 2003. She became the school nurse at GSB last October, and still works per diem in the intensive care unit at LincolnHealth’s Miles Campus.

Lilly is originally from Massachusetts. A graduate of Northeastern University, she has worked in multiple health settings across the country, including in the trauma unit of the Lahey Clinic in Massachusetts.

Lilly was nominated for the award by Beth Kessler, LincolnHealth’s nurse manager.

“Kerri is a natural caregiver. It’s in her DNA. She is one who can sense when to lean in or give space,” Kessler said in an email interview. “Being a nurse is so much more than being just a great clinician. Kerri is the entire package.”

In her nomination letter, Kessler cited an example of Lilly’s exceptional care, when she was able to help a patient at LincolnHealth’s Miles Campus whose health was deteriorating quickly in November 2017.

Lilly used her experience in critical care at the Lahey Clinic to help the patient.

“She was sicker than what we typically keep at Miles, but she had to stay; she was too unstable to leave by LifeFlight,” Lilly said. “Luckily, all of my experience from Lahey Clinic and that world of medicine became quickly useful, and, I think, helped to keep her with us.”

The patient, a retired nurse, was eventually transported to a larger health center, where she spent over 30 days and made a full recovery.

“That woman’s personal strength really allowed me to win this award,” Lilly said.“The award is really, I feel, to her.”

The patient’s family created a book, “Down the Rabbit Hole,” which details her experience to give hope to those in similar situations. A copy of the book is kept in Maine Medical Center’s trauma waiting room.

In the book is a message Lilly wrote to the patient’s family:

“I was working on her team, knowing she would give me all she had. I was inspired by her. I knew she wanted to make it and I was going to fall down trying. There are times in your life when you are given the gift of opportunity to make a difference, your aunt and I connected and I knew she was going to pull through. She looked at me with confidence. It is in these moments as nurses we can know we make a difference.”

Kessler also wrote in her nomination letter about Lilly’s work with students at GSB.

“Nurse Lilly’s office is where the children want to be – not due to illness but for care,” Kessler wrote in her nomination letter, adding that Lilly inspires and empowers students.

“The youthful spirit is really great,” Lilly said of working at the school, where her two children are students. “I feel as if most of my job here at the school is to care about the students’ health, but (also) to continue what the other staff are doing, letting the kids know that they’re important, that I’m listening to them, respecting them … I feel like those things make a difference.”

“Having worked with Kerri for a year, it is no surprise to me that she was nominated and selected,” GSB Principal Kim Schaff wrote in an email to staff announcing the award Sept. 20. “Kerri has enriched our school community with her level of knowledge, her passion for nursing, her deep compassion for all ages, her ability to connect with others, and her humor.”

Lilly was presented with the award at the American Nurses Association state conference in Freeport on Sept. 27. The award is named after Sister Mary Consuela White, who worked in nursing for most of her life and passed away in 2011 at 91 years old, according to her obituary.

Lilly said she hopes White would be excited that she won the award. White “did a great deal to foster the education of nurses in the state of Maine,” Lilly said.

“For me, nursing is all about the relationships with people,” Lilly said. “Here I am practicing trauma nursing, and I’m a school nurse, and I love both.”

Lilly said she was shocked when she was told she was being presented with an award.

“The moments with my patients have always felt special, and (the award) just kind of confirmed that they are, outside of my own thoughts. It is true that the relationships are helpful both ways; it just gave me time to kind of reflect on that,” she said.

“It is a privilege to be a nurse,” she said. “Without people who are willing to let you in, there are no great nurses.”