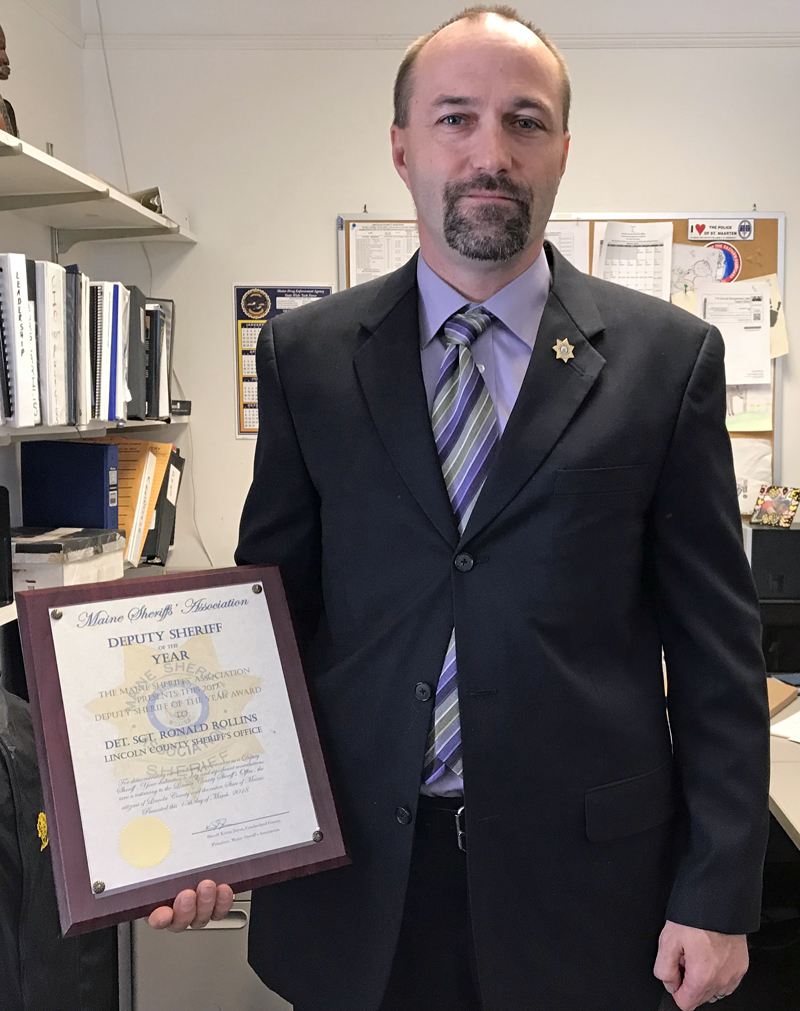 The head detective at the Lincoln County Sheriff’s Office and recent winner of a statewide award says he isn’t doing anything extraordinary, but his record and his boss say otherwise.

Detective Sgt. Ronald Rollins received the Maine Sheriffs Association’s 2017 Deputy Sheriff of the Year Award during an association banquet in Biddeford on March 15.

During an interview Thursday, March 22, Rollins said he is honored by the recognition.

“But I don’t feel like I do anything special that a lot of other people don’t do already,” he said. “I feel like I come to work every day and do my job, do the best I can, and that’s all. I don’t think I do anything exceptional.”

The award is not the first decoration for Rollins in his 18-plus years with the sheriff’s office.

He received the agency’s 2008 Deputy of the Year Award and its Meritorious Service Star “for saving the life of a suicidal man with a knife in the middle of the Medomak River” in 2005, according to the nomination letter by Lincoln County Sheriff Todd Brackett. The New England Narcotics Officers Association recognized him for his work on assignment with the Maine Drug Enforcement Agency.

While the recent award recognizes Rollins for his career rather than for a single case or incident, the nomination mentions his involvement in the investigations of the July 17, 2017 robbery of Camden National Bank in Waldoboro and a burglary spree in fall 2016, among others.

“Under his leadership, the (Criminal Investigative Division) has branched out into the field of cellular phone mapping and forensics,” Brackett said. “He encourages his staff to explore new technology and techniques of criminal investigations while instilling the importance of honing their basic investigative skills to a fine edge.”

But the key to being a good investigator, according to Rollins, is not gadgets or Sherlock Holmes-like powers of deduction. It’s hard work.

“I think it’s just being tenacious, just being willing to follow up all your leads and willing to work a little extra, put the extra time in, to stay late on a fresh lead,” he said.

Rollins, 44, was born at Miles Memorial Hospital in Damariscotta and grew up in Whitefield. He attended Whitefield Elementary School and graduated from Erskine Academy in 1992.

Then-Maine State Police Trooper Michael Richardson, of Whitefield, sparked Rollins’ interest in law enforcement, as did an uncle who was a police officer in Cambridge, Mass. Richardson now works as a civil deputy for the sheriff’s office.

His first job in the justice system was at the Androscoggin County Jail.

“I wanted to get back to Lincoln County,” he said, so he worked at Bond Brothers Hardware in Jefferson before landing a job at the old Lincoln County Jail, in the basement of the sheriff’s office.

After six months in the jail and a stint as a contract deputy in Bremen, he became a full-time patrol deputy in 2000.

From the beginning, Rollins wanted to investigate serious crimes – work he saw as more interesting and more rewarding. The sheriff’s office promoted him to detective in 2004.

Early in his career as a detective, he investigated drug trafficking, first as a member of a multiple-agency drug task force in the Midcoast, and later with the MDEA.

“I carry a full caseload, still try to do the same thing the guys I work with are doing, but I also supervise what they’re doing and assist them with their daily tasks, as far as reviewing search warrants, talking over cases, approving cases they’ve submitted for the district attorney’s office,” Rollins said.

On a typical day, he arrives at the office in the morning and reviews the previous night’s call log for anything in need of follow-up.

The agency might have a referral from the Lincoln County District Attorney’s Office or the Maine Department of Health and Human Services that Rollins needs to assign to another detective or investigate himself.

“And then it’s just a matter of juggling any other open cases that we have, doing any follow-up we need to do on them, making sure they get properly investigated and closed out,” he said.

A job that involves working with criminals and their victims involves its share of highs and lows.

“I would say the most frustrating part of the job is having cases that don’t get closed out with the results that you’d like to have – catching the bad guy,” he said.

The most rewarding part of the job is the opposite: “Catching the bad guy.”

“Either getting somebody’s stolen stuff back or bringing closure to a traumatic event, for somebody feels good,” he said.

Rollins lives in Jefferson with his wife and three children.

An avid outdoorsman, he joins a group from the sheriff’s office to head north for trout fishing in the spring, canoeing in the summer, and bird hunting in the fall.

He coached baseball and softball, basketball, and soccer at Whitefield Elementary when his older two children played, and expects to coach again when his youngest starts.

Brackett noted Rollins’ community service alongside his professional accomplishments in his nomination for the award for “extraordinary performance” as a deputy.

The inscription on the plaque reads, “Your dedication to duty and significant contributions are a testimony to the Lincoln County Sheriff’s Office, the citizens of Lincoln County, and the entire state of Maine.”