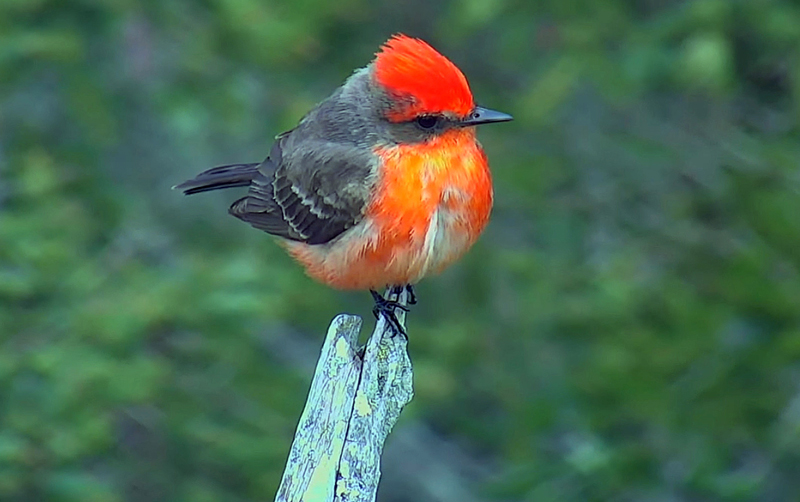 A vermilion flycatcher visits Hog Island in Bremen on April 17. The bird was first spotted by a webcam operator in Germany. (Image courtesy National Audubon Society)

At 7 a.m. on Monday, April 17, an amazing thing happened: a male vermilion flycatcher was sighted at Maine Audubon’s Hog Island in Muscongus Bay in Bremen. What is additionally amazing about the first verifiable sighting in Maine of this brightly colored little bird that normally inhabits such places as Texas, Arizona, and Mexico is that it was a webcam operator in Germany who first spotted the bird.

“Yes, you read that right,” wrote Maine Audubon Staff Naturalist Doug Hitchcox on the Maine Audubon blog at bit.ly/2q7wXfk. “It was on Monday morning when one of the camera operators, based in Germany, noticed a bright-red bird and thankfully took the following recording.” Watch the Explore.org webcam video Hitchcox refers to at the same link.

Hitchcox left a meeting he was in as soon as he was notified on his phone of the bird’s appearance and rushed to Bremen to view the bird.

Two days later, at 7:20 a.m. on Wednesday, April 19, longtime birder Jeff Cherry spotted a fieldfare just off Sheepscot Road in Newcastle, the first time a fieldfare has been documented in Maine. The bird, a member of the thrush family, was even farther off course than the vermilion flycatcher, as its normal range is northern Europe and Asia. 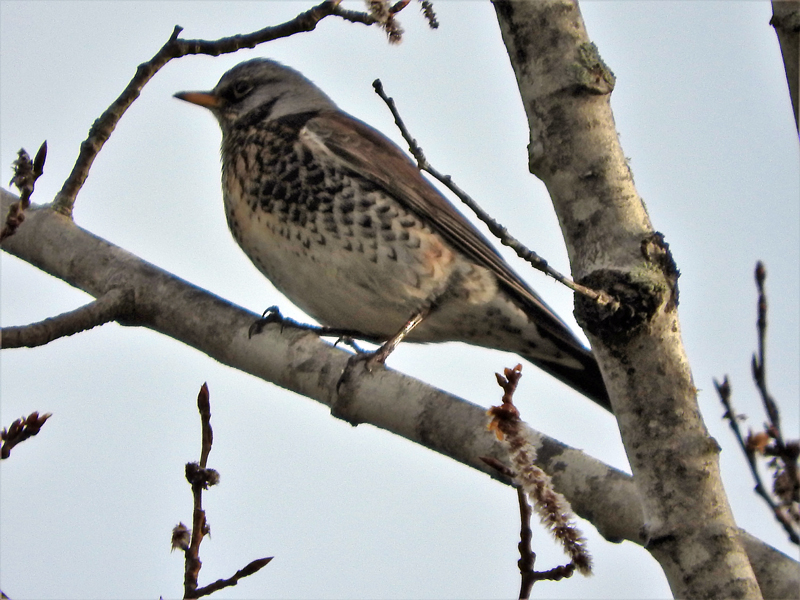 A fieldfare, native to northern Europe and Asia, perches on a tree branch in Newcastle on April 19. (Photo courtesy Jeff Cherry)

Both Cherry and Hitchcox sounded very excited about their discoveries when reached by phone recently.

“It’s super exciting right now!” Hitchcox said from his office in Falmouth. “It’s spring migration. This is when birders are on the edge of their seats hoping that something unusual might show up.” And indeed, the vermilion flycatcher showed up on Hog Island. Hitchcox found out about it in the late morning.

“I was sitting in a meeting and said, ‘Sorry, I looked at my phone, but I have to leave this meeting now.’ I dropped everything and went there,” said Hitchcox, who got the notification of the April 17 sighting via the Maine birds listserv.

Hitchcox arrived in Bremen at about 2:20 p.m., he said, and it took about an hour for him to spot the bird because of the fog. His patience was rewarded after the fog lifted when he saw it foraging for insects on the roofs of buildings on the island. He and a few other birders watched the flycatcher from a distance until about 4:30 p.m., when it disappeared from view. It has not been seen since.

Hitchcox cites a “pattern of vagrancy” – flying out of normal migration range – as the likely cause for a bird from the southwestern part of North America to end up in New England, but noted that vagrancy is more common in the fall when young birds migrating for the first time overshoot their route. “This results in Western birds in the East in the fall,” he said, “but to have one now, in the spring, is kind of mindblowing!”

“It’s always thrilling to see something unexpected and have the challenge of making a correct identification,” Cherry said. Like Hitchcox, he referred to vagrancy as the likely reason for the fieldfare to end up in Maine, adding that there is a “higher likelihood of this (happening) in highly migratory species like the fieldfare.” 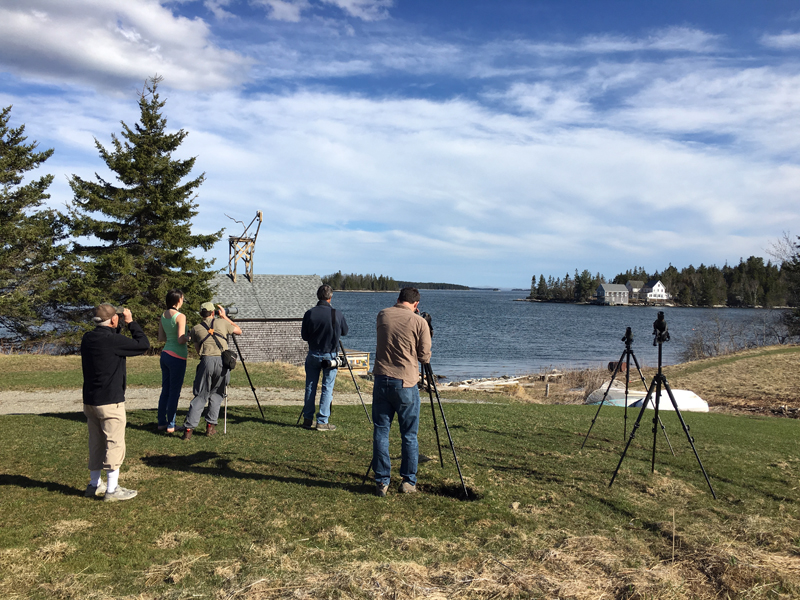 Fieldfares, he said, “winter in southeastern Europe and migrate to northeastern Europe and breed in Scandinavia and northern Russia.” This bird, he said, “could have missed Western Europe and flown over the Atlantic Ocean. It could have even come over last fall and wintered in Sheepscot without being seen. It is highly unlikely (for a bird) to survive a transatlantic trip, but it has happened before.” Cherry said it is even more unusual that the fieldfare’s spring migration normally is in the opposite direction, away from the Atlantic Ocean rather than toward it.

He compared the likelihood – and the excitement – of seeing a fieldfare in Maine to an American robin being spotted in England, a rare event that has occurred. “In England, if an American robin shows up, it gets the same fanfare as the fieldfare” does in Maine, he said.

“Somehow that bird got over here and the most likely explanation is that it flew here,” said Cherry. “That is remarkable in itself.”

The fieldfare was last seen at the Newcastle location Sunday, April 23, Cherry said April 24. “At least 100 people have seen it as of now,” he said. “More than one person drove up from Connecticut yesterday.”