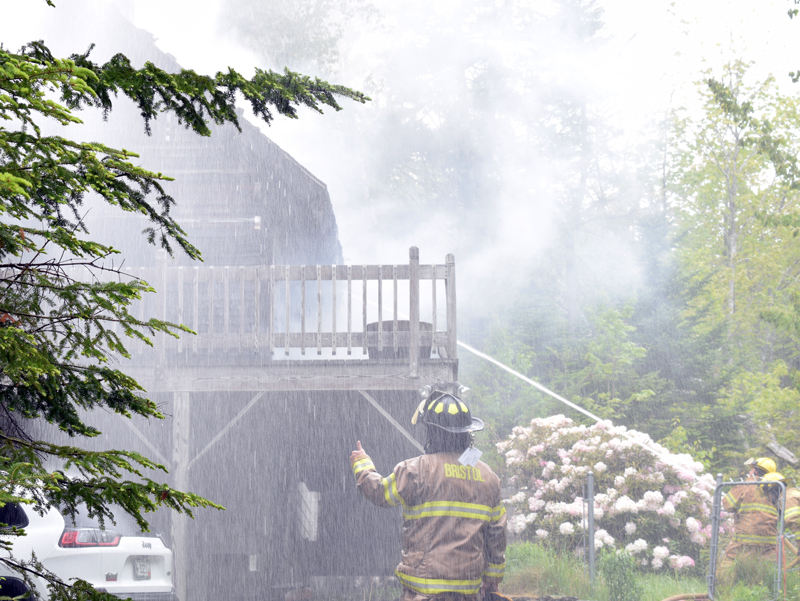 A Bristol firefighter directs the stream from a deck gun on top of a fire truck at a house fire at 159 McFarland Shore Road in New Harbor the morning of Wednesday, June 3. Bristol Fire Chief Paul Leeman Jr. said the house was a total loss. (Evan Houk photo)

An accidental grease fire, caused when the homeowner left bacon cooking on the stove, destroyed a home at 159 McFarland Shore Road in New Harbor the morning of Wednesday, June 3.

Homeowner Sherrylee D. Pierce attempted to put out the fire with some wet towels, but the flames grew out of control and she fled, according to Bristol Fire Chief Paul Leeman Jr. Neither Pierce nor anyone else was hurt.

Leeman said the seaside house was fully involved when firefighters arrived around 10 a.m. “It was very dramatic,” he said.

The Maine State Fire Marshal’s Office investigated the fire and deemed it accidental, according to Leeman.

Leeman said the fire was knocked down after about 50 minutes. For the next couple hours, firefighters mopped up and looked for hot spots in the remnants of the building. The scene was clear by 3 p.m.

Leeman said around 1,500 feet of hose was used and tanker support was provided by neighboring departments.

Leeman said Somerville Fire Chief Mike Dostie made the long drive down to repack hoses and help in any way he could. Dostie came as a member of the Lincoln County Firefighter Strike Team, the only member of the team to respond when it was dispatched.

The Waldoboro Rapid Intervention Team was also dispatched early on, but its response was canceled because an interior attack could not be mounted on the fire.

Water was supplied from dry hydrants at the New Harbor ice pond, on Route 32, and the Pemaquid Mill dry hydrant, on Route 130 in Pemaquid Falls.

The flames rekindled around 7:40 p.m. Wednesday and firefighters returned to the scene.

Leeman, in a phone interview Thursday, said piles of magazines from the house are holding heat and rekindling the flames. He will check on the structure periodically over the next few days.