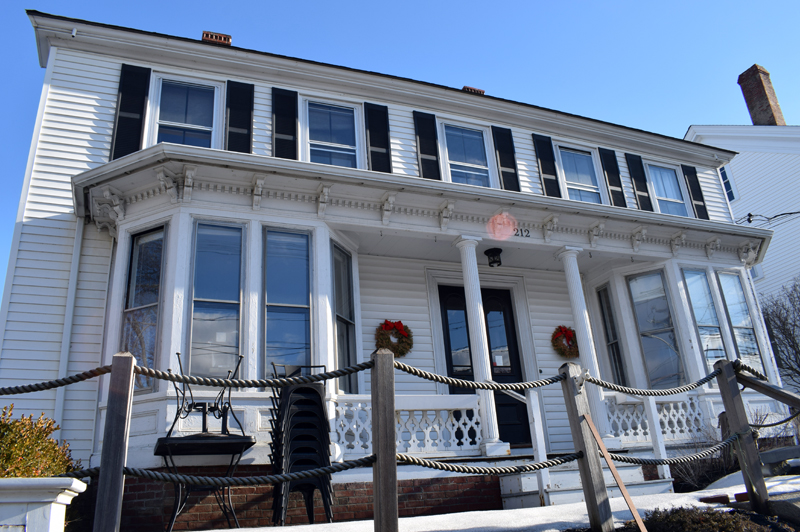 The building at 212 Main St. in Damariscotta on Wednesday, Feb. 24. The owners of Barn Door Baking Co. plan to open a breakfast and lunch restaurant in the building. (Evan Houk photo)

The Damariscotta Board of Selectmen approved a liquor license for Barn Door Baking Co. LLC to serve beer and wine in the new space after a public hearing with no comment on Wednesday, Feb. 17.

Crissy’s Breakfast & Coffee Bar closed in September 2020 after a 10-year run in the space.

Barn Door Baking Co. co-owner Annie Leck said by email on Tuesday, Feb. 23 that nothing will change at the bookstore cafe. She and co-owner Crystal Berg have not yet set a date to open their restaurant.

Barn Door Baking Co. opened in 2016 in the attached barn at 212 Main St., and the bakery portion of the business remains there.

After an executive session at the Feb. 17 meeting, the selectmen approved a collective bargaining agreement with the police department’s union that raises officers’ wages.

“We’re fully staffed with experienced officers. We want to pay them a prevailing rate that is in line with the rest of the county,” Town Manager Matt Lutkus said by phone on Tuesday, Feb. 23.

Robin Mayer, chair of the board of selectmen, was the only member to vote against the agreement. She said her vote does not indicate a lack of support for the police department.

“I do think it’s a wonderful police department,” Mayer said.

Mayer declined to explain her no vote during a phone interview Wednesday, Feb. 24, saying she could be violating negotiation agreements. But she said she wholeheartedly supports the police department and everyone who works there.

The collective bargaining agreement is renegotiated every three years.