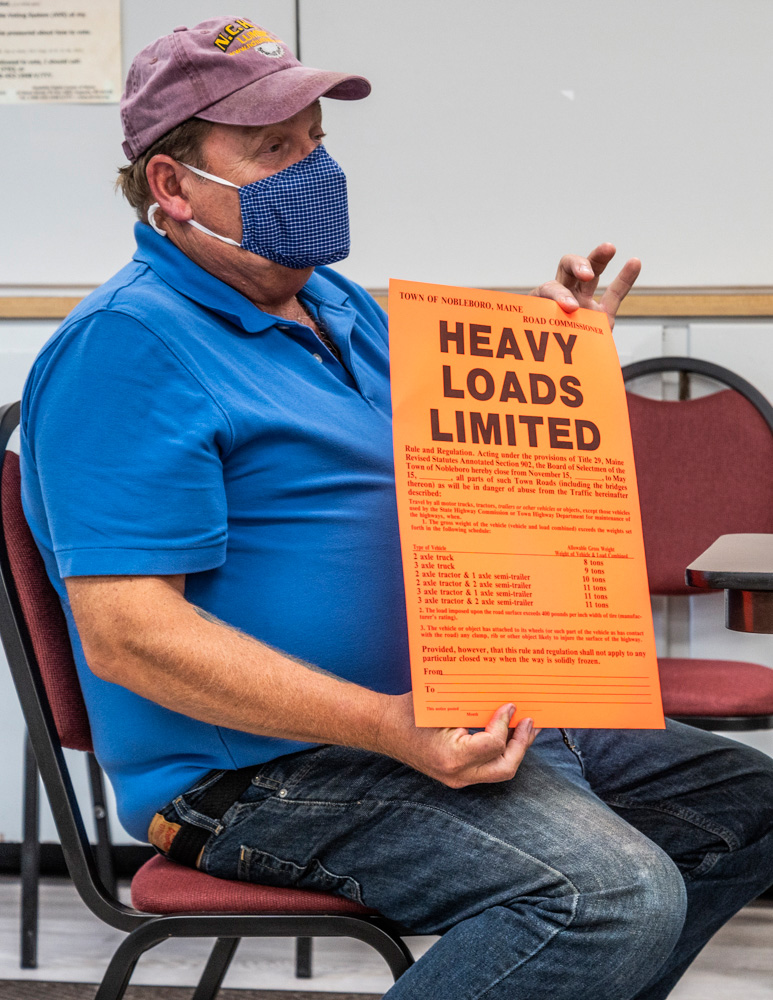 Nobleboro Road Commissioner Dale Wright displays a weight limit sign while discussing his concerns about an unstable culvert during the Nobleboro Select Board meeting on Wednesday, Aug. 10. Wright asked to post a section of Bayview Road with a 10-ton limit and to gather quotes from engineering firms in response to the deterioration of the plastic culvert. (Bisi Cameron Yee photo)

The Cotton Stream culvert on Bayview Road is rapidly deteriorating, according to Nobleboro Road Commissioner Dale Wright. Wright brought the concern before the town’s board of selectmen at its meeting on Wednesday, Aug. 10.

According to Wright, the plastic culvert looks like “a broken snake’s back” from the pressure of the weight above it and he said he does not think the culvert is capable of holding the pressure for much longer without collapsing.

“We’ve known it’s been an ongoing problem,” Wright said, but a recent inspection gave him cause for greater alarm. The culvert was installed five or six years ago, according to Dick Spear, chair of the select board.

Wright asked the board to declare an emergency situation allowing him to post weight limits on a section of Bayview Road from Belvedere Road to Borland Hill Road and to obtain quotes for design plans to replace the culvert. He said he consulted with Seth Hagar, of Hagar Enterprises Inc. in Damariscotta, who provided recommendations for local engineering companies.

“It has to be engineered,” Wright said. “We can’t guess on the size of a replacement, the type needed, and all the details necessary for this installation.”

“We are attempting to correct this as soon as possible,” Wright said.

Cotton Stream is a migratory stream where rainbow smelts spawn. According to Wright, the replacement culvert should be placed in the stream bed and the bottom lined with gravel so the fish can swim up through it.

Selectman Richard Powell Jr. said grant money may be available for the project, as the culvert presents an opportunity to improve fish passage, and the funding may offset some of the engineering or construction costs.

Wright said the urgency of the situation might preclude the grant option unless the money can be awarded after the project is completed.

“We cannot delay on replacing this culvert,” he said.

Code Enforcement Officer Stanley Waltz said the cost of the project would likely be in excess of $300,000. Spear said the town may be able to tap the town surplus to help cover the expense.

Selectman Jon Chadwick said the weight limit should be advertised in the local paper and the Lincoln County Sheriff’s Office should be apprised of the situation in order to help get word out to truck drivers who regularly use that section of road.

“That’s a pretty major route and we all use it,” he said.

There are other culvert issues in Nobleboro that, while not as urgent, still need to be addressed, Wright said.

A culvert at the corner of Route 1 and Winslow Hill Road is showing signs of erosion impacting the roadway. While the Maine Department of Transportation has determined that repairs are the town’s responsibility, Wright said sand buildup caused by lack of maintenance on the part of the DOT is the root cause. Chadwick said DOT should at least fix the guard rail and address the sand issue.

“No sense for us to replace the culvert on our dollar and have this water go right back in there again,” he said.

A third culvert at the bottom of Lower Cross Road is rusting out according to Wright who said the culvert is structurally sound for the time being but will need attention fairly soon to prevent a future hazard.

In other news Mark Becker, fish agent for Nobleboro and Newcastle, was on hand with Laurel Ames, treasurer of the Damariscotta Mills Fish Ladder Restoration Committee, and Newcastle Select Person Karen Paz to discuss replacing a bridge at the the fish ladder. 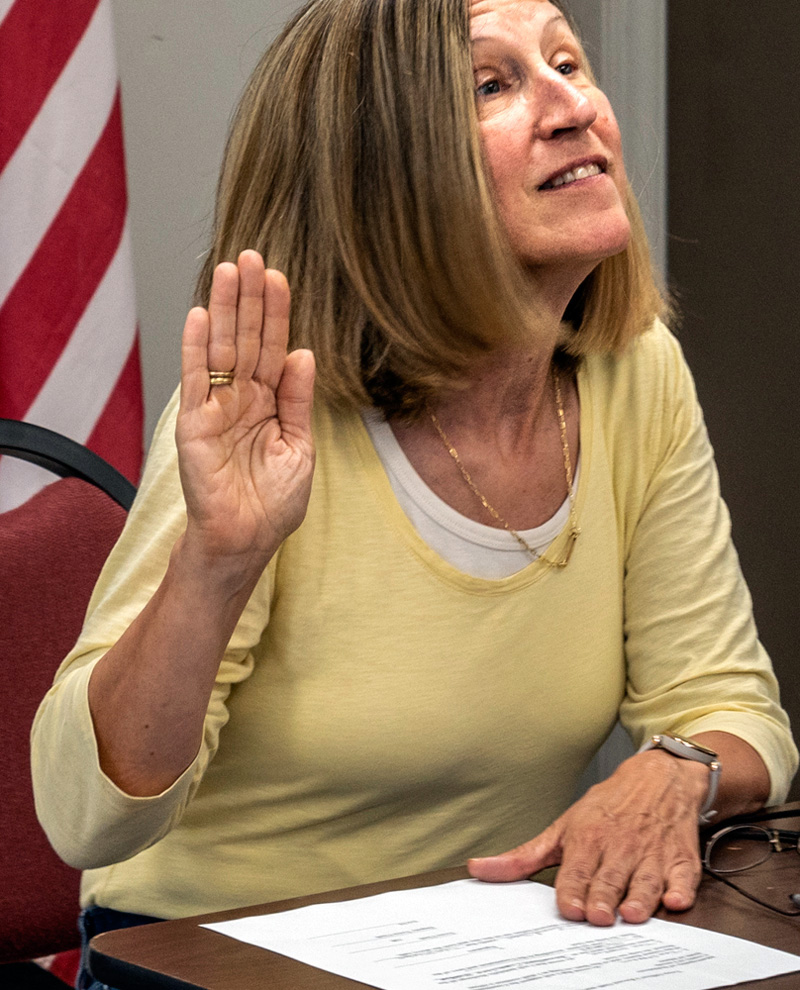 Tina Streker takes her oath of office during the the Nobleboro Select Board meeting on Wednesday, Aug. 10. The board unanimously appointed Streker to the town’s broadband committee. (Bisi Cameron Yee photo)

According to Becker and Ames, the fish ladder committee is awaiting plans from Gartley and Dorsky Engineering and Surveying out of Damariscotta in order to determine an approximate cost for the project.

The bridge replacement has been a topic of discussion for over a year, according to Ames. The cost of the project, which would be evenly split between Nobleboro, Newcastle, and the fish ladder restoration committee, is expected to be in the $50,000 to $60,000 range, although there are no definitive cost estimates yet.

The Nobleboro comprehensive plan has been approved by the state. A public hearing about the plan is scheduled for 6:30 p.m. on Monday, Sept. 12 in the conference room of the Nobleboro town office. The document is available on the town website and copies are available for review at the town office.

According to Powell, the comprehensive plan is “an assessment of how the town has changed since 2007 when the last one was enacted. This is where we were. This is what’s changed. This is what we recommend we do.” Two significant areas addressed in the plan are the impact of pollution on the lake and affordable housing.

The plan addresses the issue of housing with statistics that indicate that more than 60% of Nobleboro homes sold in 2020 were unaffordable for most Nobleboro residents. The plan recommends implementing policies to encourage affordable workforce housing.

According to Powell, the completion of the comprehensive plan does not alter any current policies or procedures. If the plan is approved by Nobleboro residents, the next step will entail reviewing town ordinances and determining if any changes are appropriate. If so, those changes will also be brought before voters prior to implementation.

The board appointed Tina Streker to the broadband committee. Streker was sworn in by Deputy Town Clerk Susan Pinnetti-Isabel.

“I think broadband is important to all of us,” Streker said, citing education, health care and civic and social engagement as important applications that broadband amplifies. “It puts us all on an equal playing field.”

Waltz informed the board that a Damariscotta Lake property owner removed a 6-by-10-foot building that had been located within 5 feet of the water in order to comply with the town’s shoreland zoning ordinance, which prohibits any construction within 100 feet of the water.

The next meeting of the Nobleboro Select Board is 6 p.m. Wednesday, Aug. 24.