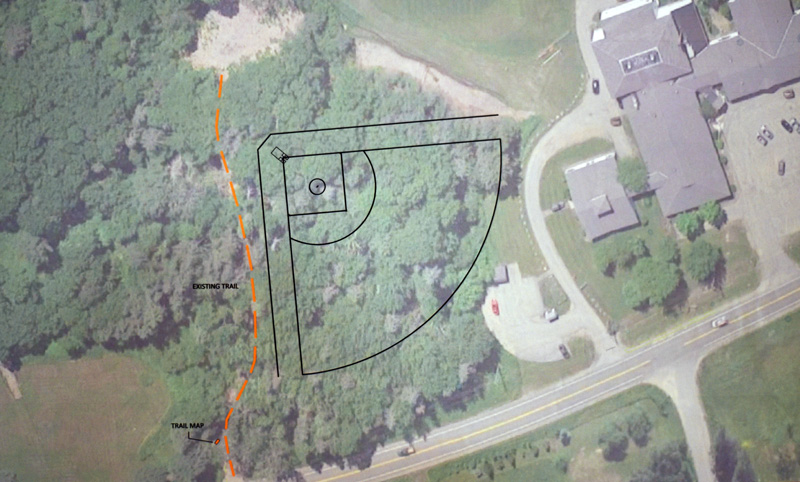 A diagram depicts the location of a potential new softball field at Bristol Consolidated School. The field was the subject of a public hearing at the school Wednesday, June 20. (Jessica Picard photo)

Bristol Consolidated School officials presented the school’s early plans for a new softball field during a public hearing in the gym Wednesday, June 20.

The school currently buses its softball team to a field at Pemaquid Beach Park after school, according to BCS Athletic Director Chris Perry.

Softball players have to leave school early to make the bus, according to Perry. The off-campus location also causes some concern about student safety.

“It’s always been a concern of mine,” Perry said. “I’d love to keep them on campus.”

Bristol School Committee Chair David Kolodin said having a school team use a field off-campus “doesn’t really make much sense” to him.

“Are the kids safe down at the beach? Probably. But I’d rather have them right outside the school,” Kolodin said.

About 70 Bristol residents play for Lincoln Little League teams, according to Farrin.

The school has room for the field between the baseball field and Bristol Road, according to diagrams of the site.

The site is currently forest and wetlands, according to Rick Kusturin, assistant superintendent of schools for business at AOS 93.

“It’s going to require a fair amount of work to develop that site,” Kusturin said.

Cordjia Capital Projects Group, of Camden, has completed topographic and wetland surveys of the site.

The funds for the surveys came from the capital enhancement and improvement line of the 2018-2019 education budget, according to Kusturin.

Curtis Dow, of Cordjia Capital Projects Group, participated in the meeting via speakerphone and fielded some questions from attendees.

Cordjia has sent an application to the state for approval to use the land, since the project would require development of a wetland area, according to Kusturin.

Dow said he believes the state will approve the application.

Bristol Town Administrator Chris Hall said he thinks the final estimate will be closer to $250,000.

The site has moved slightly since the original estimate, and will require less wetland development and ledge removal than previously thought.

Hall said that the town has received $150,000 in donor pledges for the project. He hopes most of the remaining cost would be covered by other monetary donations, as well as donations of time and materials.

It has not been decided whether remaining costs would be paid from the municipal or education budgets.

Kusturin said a more detailed proposal will likely go to a vote at annual town meeting in March 2019. If the article passes, the field would probably be available for use in the spring of 2020.

If the application to use the wetland is approved, the next step will be to get more detailed costs and for the school committee to approve the clearing of the land, according to Hall. He hopes this will not cost the town anything due to the value of the lumber on the land.