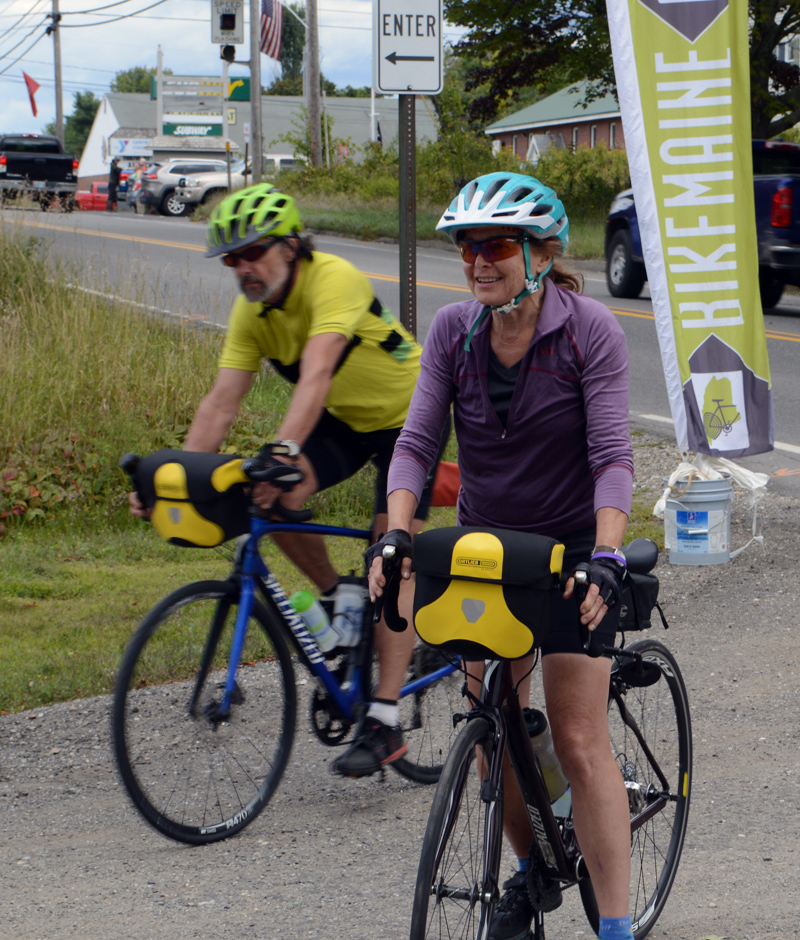 Steve Baker and Susan Gresser, a married couple from St. Johnsbury, Vt., arrive at Round Top Farm in Damariscotta for an overnight stay on the BikeMaine tour Monday, Sept. 9. (Evan Houk photo)

The Bicycle Coalition of Maine brought 450 cyclists from 37 states and four countries to Damariscotta on Monday, Sept. 9 for an overnight stop at Round Top Farm during their 325-mile tour of Kennebec Valley and the Midcoast.

Coastal Rivers Conservation Trust, which owns Round Top Farm, and the Damariscotta Region Chamber of Commerce provided a regal welcome for the tired riders.

The seventh annual tour, BikeMaine 2019: Coastal Connections, will travel through 35 Maine towns. The tour aims “to encourage bicycle travel and tourism in Maine while providing riders with an incredible opportunity to explore quintessential Maine at 10 to 15 miles an hour,” according to a press release

At Round Top Farm in Damariscotta, the ladder of a Massasoit Engine Co. truck, adorned with a billowing American flag, extended across Main Street to welcome riders. Locals rang cowbells and cheered on each new bicycle arrival.

The cyclists filtered in slowly over a period of about three hours, between 1 and 4 p.m. Some breathlessly shouted their assigned number to the BikeMaine attendant as they coasted across the day’s finish line, while others zipped past Round Top Farm to go explore downtown Damariscotta.

Before arriving in Damariscotta, the cyclists stopped in Round Pond for lunch. The majority of the ride into the area took place in Bremen and Bristol, partly on Routes 32 and 130.

Many riders took advantage of an optional 6.4-mile side trip to Pemaquid Point Lighthouse Park before settling in at Round Top Farm.

One enthusiastic rider yelled to the waiting greeters as he passed by on Main Street, “I started in Oregon!”

Eliza Kress, communications and development manager for the Bicycle Coalition of Maine, said BikeMaine definitely had some tired riders coming in, since they covered the longest stretch of their route Monday (68.4 miles) and the previous day’s route was very hilly.

But Kress said everything in Damariscotta went off without a hitch.

“We were taken aback by the welcome that the riders got,” Kress said.

She said the riders were thrilled to stay at such a gorgeous site and that the trolley service provided by Country Coach Charters, of Nobleboro, was a huge hit.

“They loved having a mode of transportation other than their bikes,” Kress said.

When riders arrived at Round Top, they were greeted with impressive accommodations. There was a booth set up by Rockland-based Sidecountry Sports that displayed all sorts of biking attire and gear. The booth had a maintenance stand for riders to perform safety checks of their bikes.

The CLC YMCA offered refreshments in the form of fresh smoothies made in a blender powered by pedaling an attached bicycle.

Inside the old Round Top Ice Cream stand, a cellphone charging station was set up. In front of that, BikeMaine had an information booth set up alongside a local sponsor, Damariscotta Bank & Trust.

Hannah McGhee, outreach and communications manager for Coastal Rivers Conservation Trust, said the busiest spot for a time was the charging station. She said people brought in all kinds of devices other than cellphones, like GPS units and laptops. One woman even brought in her electric bicycle to recharge for the next day’s trek.

Country Coach Charters ran the trolley between the temporary BikeMaine village and downtown Damariscotta from 1 until 6 p.m., when the riders had to be back for dinner.

The BikeMaine event has been an economic injection for other communities in Maine.

Will Elting, BikeMaine ride director, told the Damariscotta selectmen in a presentation May 1 that the event could be an “economic development driver” and “tourism opportunity” for the community.

Elting said BikeMaine brought in over $745,000 in direct economic stimulation for the St. John Valley, a region in northern Aroostook County.

It is too early to tell what the economic impact might be for Damariscotta. However, Rebecca Telega, marketing and membership coordinator for the Damariscotta Region Chamber of Commerce, said she plans to conduct a survey of local businesses to assess the impact of BikeMaine and its 450 visitors.

Three-quarters of the riders were from out of state, according to BikeMaine data, and Telega hopes their experience in the Twin Villages will bring some back. The average age of the riders is 62.

The food served at the BikeMaine village was mostly from Main Street Grocery, according to Damariscotta Region Chamber of Commerce President John Roberts. Dinner was prepared and cleaned up by The American Legion Wells-Hussey Post No. 42 and breakfast was served by the Damariscotta-Newcastle Rotary Club the following morning.

A dinner of turkey with cranberry sauce, Brussels sprouts, roasted carrots, and sweet potato fries awaited the cyclists in the massive dinner tent. A tempting dessert of brownies or blondies with ice cream was also available.

The chamber printed comprehensive guides to the Twin Villages specifically to distribute to the BikeMaine crowd. The guides contained a map highlighting points of interest nearby, such as restaurants, bars, and grocery stores.

An Oyster Trail map included in the guide explained Damariscotta’s rich oyster history, dating back some 2,200 years, and the ancient heaps of discarded oyster shells, called middens, along the Damariscotta River’s shores.

The guide advised cyclists that the Whaleback and Glidden middens are available for public viewing from trails right behind Round Top Farm.

The trail highlighted King Eider’s Pub, Schooner Landing, Shuck Station, and the Newcastle Publick House as essential stops on the Oyster Trail to “experience some of the best locally sourced food available.”

A makeshift “tent city” was slowly established along the banks of the Damariscotta River as the cyclists began to arrive and set up camp at Round Top Farm.

Tractor-trailers housed portable showers and meals were served in an enormous dining tent on the site where an ice skating rink is set up in the winter.

The infrastructure also included a field full of porter tents that were erected earlier in the day for those cyclists who paid an additional fee to have their lodging set up on arrival.

“It was very well-organized for us never having done anything like this before. We didn’t know what to expect. … Everyone worked their butts off. It was a great team-building exercise and a great event,” Telega said.

She said she had several conversations with visitors who said they would return to the Twin Villages area in the future.

Steven Hufnagel, executive director of Coastal Rivers Conservation Trust, said by email that many of the riders he met also said they plan to return.

Hufnagel cited the “impressive logistical feat” accomplished through the work of the Bicycle Coalition of Maine and the “unflappable” volunteer leadership of Roberts and Mary Kate Reny.

He said the cyclists “truly left barely a trace” and were a “respectful and appreciative crowd.”

Hufnagel welcomed all the riders after dinner in the Darrows Barn, before the Portland Bach Experience provided the night’s entertainment.

Kress, of the Bicycle Coalition of Maine, said the string quartet in the Darrows Barn was a special experience. She said it kept people engaged right up until it was time for lights out at 9 p.m.

Then it was up early for breakfast the next day for the riders, before heading to BikeMaine’s next stop in Rockland.

(Correction: An earlier version of this article online and on the front page of the Sept. 12 edition incorrectly reported that the food served at the BikeMaine village was donated. The food was purchased. The Lincoln County News regrets the error.)