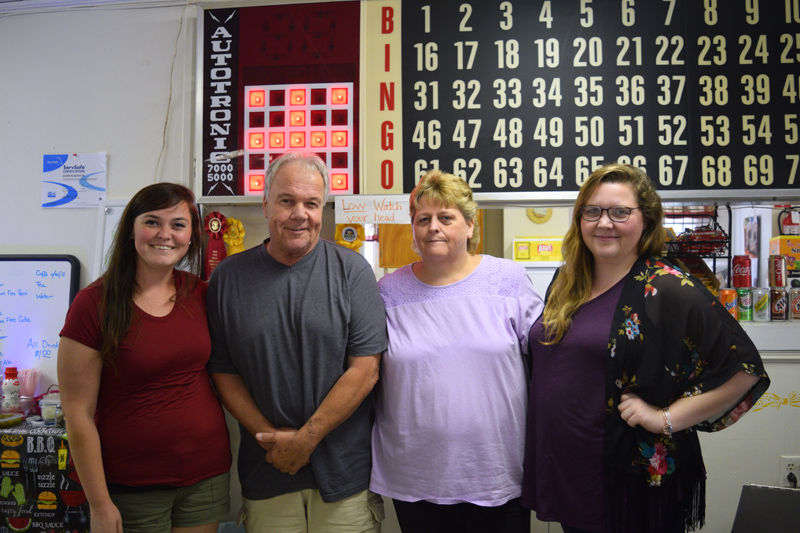 The Smerdon family attends a bingo benefit at the Huntoon Hill Grange in Wiscasset on Sunday, Sept. 22. From left: Cassandra, Michael, Susan, and Lindsay Smerdon. Missing from the photo is Jordan Smerdon. (Jessica Clifford photo)

“It would cost us $1,000 in stamps to thank everybody,” Michael Smerdon, the father in a Bristol family that lost everything in a July fire, said of the support his family received at a benefit Sunday, Sept. 22.

Early July 5, a fire broke out in the Smerdons’ storage shed and quickly spread to their two vehicles and house. Today, the family of five – couple Michael and Susan Smerdon and their three children, Cassandra, Lindsay, and Jordan Smerdon – are rebuilding their lives together.

Longtime family friend George Sawyer, of New Harbor, organized a bingo benefit at the Huntoon Hill Grange in Wiscasset. About 25 people gathered to support the family.

Before playing bingo, Michael and Susan Smerdon got up to recount their experience.

She looked at her clock, saw the time, and then saw the shed was “fully engulfed.”

Susan Smerdon jumped out of bed and woke up her husband and son. She went to her kitchen to call 911 and Michael Smerdon noticed that their vehicles were on fire as well. 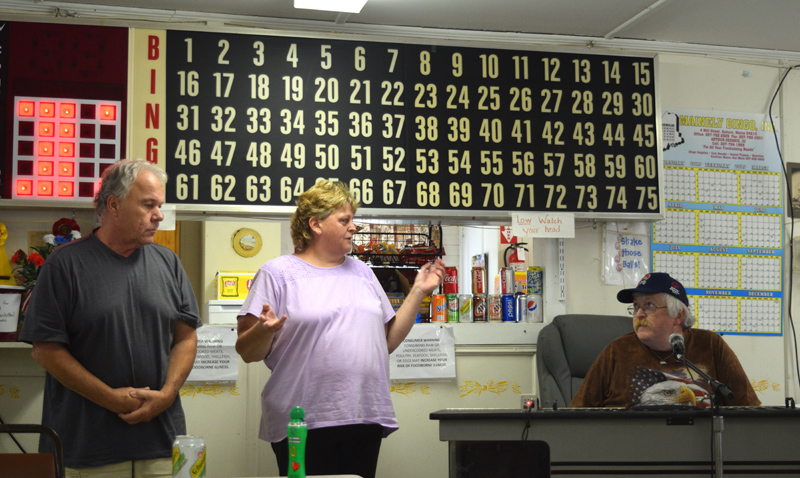 “It eventually set some trees on fire that went over to the house and caught it on fire,” Susan Smerdon said.

The shed burned down and the two vehicles – a Chrysler minivan and Ford truck – were burned out.

“Between the fire and smoke and the water damage, it ruined everything inside,” Susan Smerdon said of the house.

The fire burned a hole about 20 feet wide in the roof after spreading into the attic.

Most of the damage was to the master bedroom, which is where the family’s sentimental items were stored, Susan Smerdon said.

Afterward, the family was able to save a handful of baby pictures, but most had water damage, Susan Smerdon said. A little bit of jewelry was also found.

There were no injuries in the fire. Bristol Fire Chief Paul Leeman Jr. said the cause was traced to a faulty extension cord in the outbuilding.

After the Smerdons spoke, Sawyer said, “I decided to help them out, and with the help of the Grange, maybe we can help rebuild their lives a little bit.” 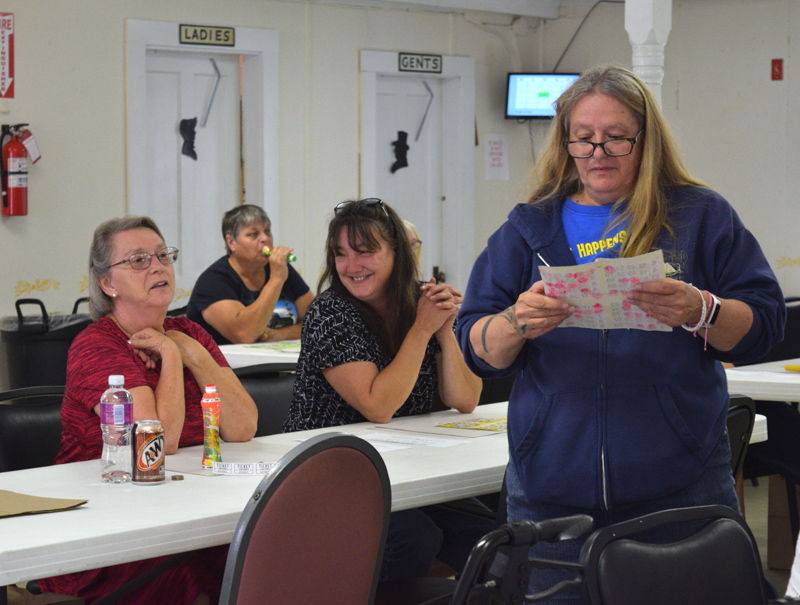 “I’ve known (Sawyer) my whole life, basically,” Susan Smerdon said. She was born and raised in Bristol. Sawyer went to school with her sister.

Michael Smerdon is a semi-retired house painter and Susan Smerdon had been babysitting her grandsons until they started preschool this September.

In addition to the benefit, the family has received other support from the community. The American Red Cross gave them clothing and toiletries.

The agency offered housing, but Susan Smerdon said they were fortunate to be able to stay with their daughters.

A friend of Cassandra Smerdon started a Facebook fundraiser to help rebuild the family’s life. With the money from this fundraiser, the family was able to purchase a car.

“I had friends that personally came to me with cash in hand and gave it to me. It was very nice,” Susan Smerdon said. “I was taken aback when I look back at all we lost.”

Cassandra Smerdon, who works at the Renys distribution center in Newcastle, said Renys donated clothing and other items to her family.

Susan Smerdon found out about the fundraiser Sawyer organized on Facebook.

She told Sawyer, “You don’t have to do that, and he’s like, ‘I want to, I’ve known you forever and I’m going to and here are the details.’”

“When the fire happened, I wanted to do something to help the family out,” Sawyer said. “I know if I was in the same situation that I would appreciate any help I could get.”

The Huntoon Hill Grange donated the space for the event, Sawyer said. Everyone who played bingo paid for their cards. The prizes were donated by local merchants. Raffle tickets were sold and any leftover prizes at the end of the games were to be raffled off.

All those funds went to the Smerdon family, Sawyer said.

Sawyer did not want to say how much money was raised; however, he called it a successful event.

For now, Michael and Susan Smerdon are living with their daughter Lindsay, 26, while Jordan Smerdon, 23, is living with Cassandra, 28.

The family recently secured a rental in Damariscotta and will move in Oct. 1.

The next step for the family is to dispose of what remains of their house and finish going through the insurance process.

They are not sure if they will rebuild on the property. “We need this time to regroup,” Michael Smerdon said.