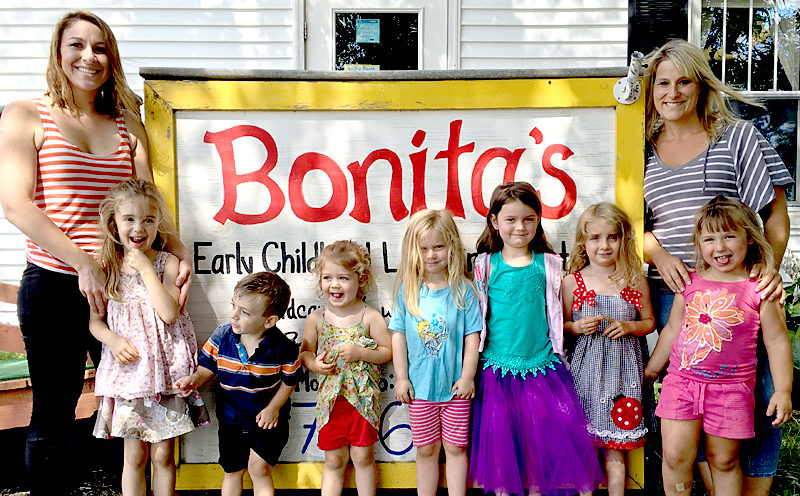 Kristin Morgner (far left) and Kira Gallant (far right) with some of the children from the “radishes” classroom at Bonita’s Early Childhood Learning Center in Damariscotta. Gallant is the new owner of the business as of July 1; Morgner, the previous owner, will leave in mid-August for Pennsylvania. (J.W. Oliver photo)

As of July 1, Bonita’s Early Childhood Learning Center in Damariscotta has a new owner, a Jefferson woman with experience in child care and education.

Kira Gallant comes to Bonita’s from Great Salt Bay Community School in Damariscotta, where she worked for a number of years in the behavioral program and the resource room.

Gallant was also the safety care trainer for the Central Lincoln County School System, responsible for training district staff on behavioral strategies. She also operated an after-school program and summer day camp at her home.

A graduate of GSB and member of the Lincoln Academy Class of 1998, she holds an associate degree in elementary education from Grand Canyon University and needs one more class, which she plans to take this fall, to complete a bachelor’s in education studies.

Gallant said she was at work at GSB when a parent who brings their children to Bonita’s arrived at school one day in a panic. Bonita’s owner Kristin Morgner was planning to leave, and the parent was concerned about the center’s future.

“I’ve always had a passion to work with kids,” Gallant said. “I saw it as a perfect opportunity to keep something going and I know there’s always a need in this community for care.”

The ownership of Bonita’s officially transitioned to Gallant on July 1, but Morgner has stayed on to ensure a smooth transition.

Morgner will depart in mid-August to move to Pennsylvania, where she has family. She will work at the Upland Country Day School, a private school for pre-kindergarten through grade nine in Kennett Square.

“I think Kira is a great new owner and director, and I feel great about leaving with her to continue everything that was started,” Morgner said. “I think it’s in a great place right now. It’s come so far, but still has room to grow, and I think Kira is the best person to take it forward.”

“I’ll miss it,” Morgner said. “I’ll miss all the kids and families.”

Gallant will keep the name Bonita’s, which is in memory of Morgner’s mother. “I think it’s a well-known name,” Gallant said. “I want to keep that going and keep it familiar for people.”

Gallant does plan some “small changes” and has already made others. She brought in a big picnic table for the back deck, as well as more sand for a play area in the backyard.

She aims to complete a fundraising drive, started by Morgner, for a new playground. Bonita’s has a bottle drop-off, and Gallant plans to organize a dinner in the fall or early winter. She would like to have a new play set in place by spring 2017.

She plans to update the curriculum for the preschool classroom to ensure school readiness. From her experience in the education system, she knows what schools want to see when students start kindergarten.

Bonita’s has four classrooms. When children transition from one classroom to the next depends on the individual.

“We really just look for the readiness of the child,” Gallant said. “If they’re bored – and that’s when a lot of the behavioral stuff comes out – we know we need to adjust to meet their needs.”

Bonita’s also offers before- and after-school care for children up to 10 years old, and the buses from GSB and Nobleboro Central School pick up and drop off there.

Bonita’s is licensed for up to 33 children ages 6 weeks to 10 years and currently has 29 enrolled, with openings in the preschool classroom and room on certain days in the infant room.

Bonita’s employs a total of 10 full- and part-time staff, and always has two staff members in each classroom.

Bonita’s is open from 6:30 a.m. to 5:30 p.m. Monday-Friday at 34 Midcoast Road in Damariscotta, across from Mid-Coast Energy Systems Inc. and near the intersection of Route 1 and Center Street. For more information, call 563-1710.