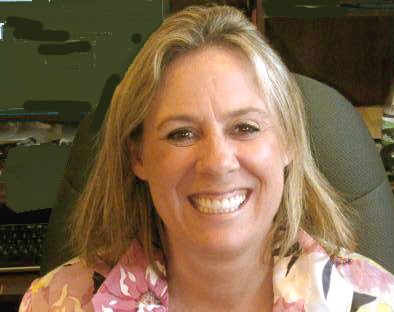 Hawke, owner of Hawke Motors Inc., an auto repair shop, has worked in the service industry her whole life. She has worked in restaurants and still sometimes helps her sister, a manager at Robinson’s Wharf in Southport.

Hawke’s immediate family is comprised of her husband, Andy, and her three children, Nick, Lelia, and Andrew. Her son Nick has a daughter, Eloise, whom Hawke adores. Her son Andrew has a friendly golden retriever, Gibson, who happily greets customers at the auto shop.

Hawke serves on the boards of the Boothbay-Boothbay Harbor Community School District, the nonprofit Rebuilding Together, and the Boothbay Region Health Center, and volunteers with the American Legion and the Windjammer Days festival.

She said it is because of her involvement in the community that she decided to run for office again. She hears residents’ concerns and wants to help. In 2018, she focused more attention on her brother, who had pancreatic cancer, than campaigning. She attributed her loss to her inability to give the campaign her full attention.

She lost her reelection bid to Boothbay Democrat Holly Stover. She is challenging Stover this year.

When it comes to her legislative priorities, she wants to represent small businesses in the House, especially in a region fueled by tourism. She said ensuring a successful future for younger generations depends on supporting struggling hotels, restaurants, and other businesses.

She also referenced the lobster industry, as her husband and sons are lobstermen. “There’s no representation for them in Augusta,” she said.

In the midst of the coronavirus pandemic, Hawke is glad that the state is allowing schools to decide if they should reopen or continue distance learning into the new school year.

She believes preparing for future state emergencies will require the state to put some money away, much like families do.

“You need to treat the state budget like a household budget,” Hawke said. As state government braces for a $1.4 billion revenue shortfall over the next three years, Hawke said it needs to stop “silly spending.”

Of whether the state should help businesses hurt by the pandemic, Hawke believes the state needs to let businesses open and let them figure it out.

“Give them guidelines and let them proceed with caution,” she said. “Don’t threaten to fine them if they’re doing something wrong.”

Regarding schools reopening, Hawke thinks it will be difficult for children to wear masks, but they need to go back to school. She cited a variety of reasons, including hunger issues, parents needing to work, domestic violence, and other social issues. She thinks teachers will have to show they are not afraid, but admits it will be difficult.

In addition to facing the COVID-19 health emergency, Maine had 127 fatal drug overdoses in the first quarter of 2020. Hawke said that during the state-ordered lockdown at the beginning of the pandemic, liquor and drug sales skyrocketed. The state can address this, she said, by getting people back to work.

According to the Maine Department of Administrative and Financial Services, retail sales of liquor increased by 15% in March and April compared to the same period in 2019. This figure does not take into account the loss of sales at bars, breweries, or restaurants.

“We have a lot of pandemics here, and it’s not going to get better until we go to work and give people something to do,” Hawke said.

The question of police reform has come up in protests in Lincoln County and around the world. Hawke does not believe defunding police is the solution. She said Maine could benefit from having more police.

“Everything needs reform a little; nothing’s perfect,” she said.

Hawke thinks the state needs to take action to ensure the availability of affordable housing. She suggested that bank regulations could be loosened, but said that is more of a federal issue.

While affordable housing might attract and retain more working-age people, Hawke said people and businesses leave Maine or do not come to Maine in the first place because the taxes are too high.

“We have the land, we’re safe, we’re kind; we have everything but the finances,” Hawke said.

In addition to having “everything,” Hawke said, her favorite thing about the district is the people. She said that when there’s a crisis, the district becomes one big family and everybody rallies together.

The people of the district are also why she is running to regain her seat in the Legislature. She said she has proven she can get the job done for them before, and she can do it again.