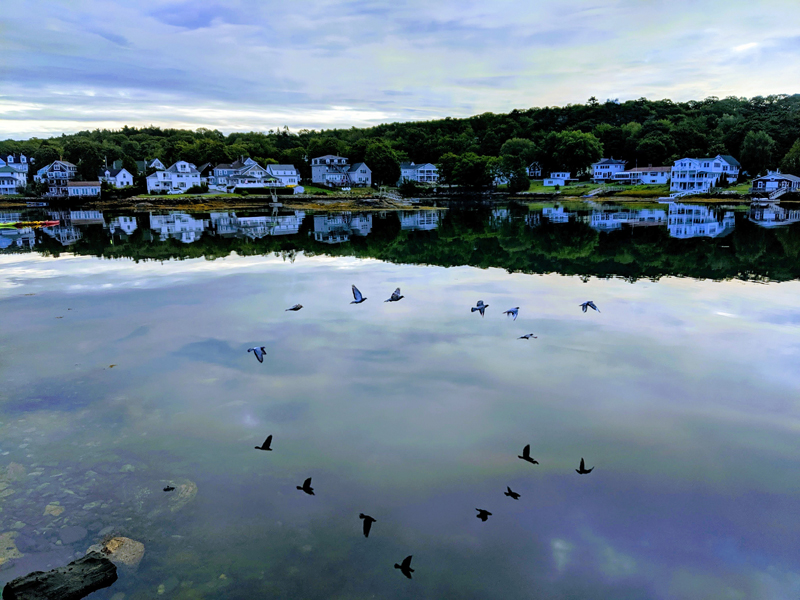 Dick Morrison’s photo of birds flying over Boothbay Harbor received the most votes to win the April #LCNme365 photo contest. Morrison will receive a $50 gift certificate to Newcastle Chrysler Dodge Jeep Ram Viper, the sponsor of the April contest.

Morrison, of Boothbay Harbor, snapped the photo using his Google Pixel phone while on a walk in August.

“I was taking shots as I usually do, and I wanted to get the pigeons going across the water,” Morrison said. “Shooting on a phone, you don’t really always see the big picture as it were, so I didn’t see the herd until I got home.”

Morrison is no stranger to the #LCNme365 photo contest. He previously won monthly contests in September 2018 and January 2019.

“I do appreciate the fact the people enjoy the photos,” Morrison said. “It’s being in the right place at the right time.”

In addition to having his photo featured on the front page of The Lincoln County News, Morrison will receive a $50 gift certificate from April’s contest sponsor, Newcastle Chrysler Dodge Jeep Ram Viper, of Newcastle.

As the fourth monthly winner, Morrison cannot win another weekly or monthly contest in 2020, but he can still submit photos for inclusion in the weekly slideshow of entries at lcnme.com.

Morrison’s photo will compete against the other 11 monthly winners at the end of the year as voters select the winner for 2020.

Submissions are now being accepted for the May #LCNme365 contest. The winner will receive a $50 gift certificate from the monthly sponsor, Metcalf’s Submarine Sandwiches. For full rules and means of entry, go to lcnme.com/photo-contest.