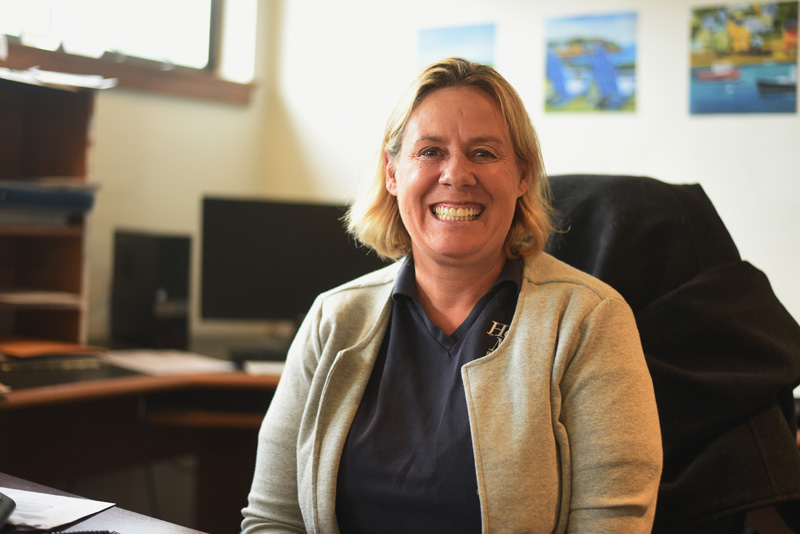 State Rep. Stephanie Hawke, R-Boothbay Harbor, is running for her third term in the Maine House of Representatives. Hawke describes herself as an advocate of small businesses and an opponent of laws and regulations that harm small businesses, including a minimum wage.

The Hawkes have owned Hawke Motors Inc. in Boothbay Harbor for around 10 years. Hawke is the vice chair of the board of the Boothbay-Boothbay Harbor Community School District and a board member of Rebuilding Together, an organization that attempts to keep people in their homes.

She is the ranking minority member of the Legislature’s Marine Resources Committee.

If re-elected, Hawke said she “would continue to work for the small business, and for the people that don’t think they have a voice.”

“One regulation affects a lot of people,” Hawke said. “Without small business, we have nothing in the state of Maine. Maine is built on small business.”

Hawke said getting people with addiction to drugs into jobs, rather than into jail, would help combat the state’s drug problem.

“We need to get people, get their minds busier so they’re not on the drugs,” she said. “I think people need more goals, they need to keep themselves going.”

Hawke said she does not support the state raising the minimum wage, or having a minimum wage at all.

“That’s another regulation on a business,” she said. “Everything is going to go up, and somebody’s got to pay for it.”

Hawke said she believes businesses should decide what to pay employees.

“It’s always been my experience that you work for something, and if you don’t like what your wage is, you can, A, find another job, or B, work harder and get a raise,” she said. “That’s how we all got raises – not federally mandated, we worked our tail off.”

“I think it gives people motivation. I mean, nothing motivates people more than money,” she said. “I just think (the minimum wage) is stomping on business.”

When speaking about the state’s labor shortage, Hawke said trade careers need to be promoted more. “We have the business, we just need the workers,” she said. “We need the tradesmen back.”

“We have to stop pushing kids to go to college for the sake of college and get a liberal arts degree,” she said. “Put them in there and get a trade, where you can actually out of the gate make a lot of money.”

She said she would like the idea of learning a trade to be more heavily promoted through newsletters, social media, newspapers, and schools.

Hawke said that while she supports the citizen’s initiative process, she believes initiatives need to be vetted.

“When you’ve got people that don’t care about the state of Maine, Lord knows if they’ve even been in Maine, and they come in and say, ‘Well, I think this is good for California, so let’s do that here,’ and we’re two different states, I think that’s bad for the state of Maine,” Hawke said.

“If it’s going to get on the ballot, then I think it needs to go through some kind of … it needs to be hashed out,” she said.

Hawke said she will support an expected legislative effort to make it easier to prosecute those who commit female genital mutilation.

Such a bill has been introduced before, but did not pass. Democratic opponents said the practice is already illegal.

“It turned into a partisan bill, and it shouldn’t have,” Hawke said. “That was the most disgraceful vote up there in the four years since I’ve been up there … This one should have been passed through the House, passed through the Senate, easy. It’s child abuse.”

Hawke said she is very accessible and those who wish to speak with her can email her at stephaniehawke66@yahoo.com or call 380-6803.

“Every bill means something to somebody … that’s the part that I like. At the end of the day, you’re helping somebody, you’re giving them a voice in Augusta,” she said. “I’ll help anybody, but they have to be willing to help themselves too.”

When not working, Hawke said she enjoys spending time with her 4-month-old granddaughter, Eloise.