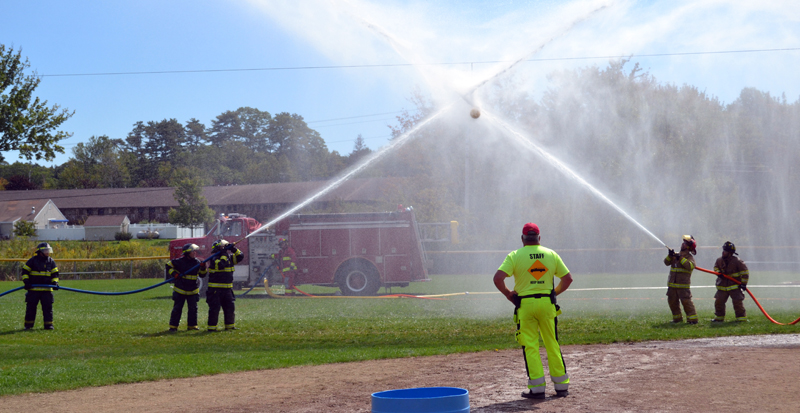 The Newcastle Fire Department battles York Beach in the waterball competition during the muster at the 54th Maine State Federation of Firefighters Convention in Boothbay Harbor. (Abigail Adams photo)

Fire departments from Portland to Presque Isle gathered on the Boothbay peninsula Sept. 7-10 for the 54th Maine State Federation of Firefighters Convention. The convention was a time of celebration, remembrance, and friendly competition.

Events included a 9/11 memorial service, a parade, a banquet and awards ceremony, and a muster, where firefighters showcased their skills in a series of friendly competitions.

“It’s been a great few days,” Boothbay Fire Chief Dick Spofford said. In networking with members of the fire service throughout the state, “you really do get the sense that we’re all in this together,” he said. “We all have similar struggles and we all share in the same fun. We’re all in the same boat.”

“This brings the brotherhood and sisterhood together,” Desmond said. 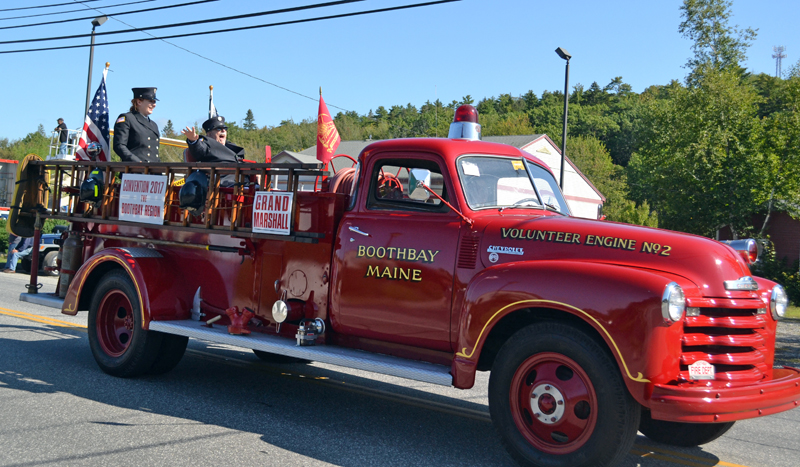 Federation members discussed legislative successes of the past year during a business meeting prior to most of the weekend’s activities.

For about 20 years, the federation has worked to ensure volunteer firefighters have access to a pension to compensate them for their service, Desmond said.

An Act to Establish the Maine Length of Service Award Program became law in 2015 and Gov. Paul LePage recently appointed a board of trustees to oversee the program. “We worked hard on (the program). It’s nice to see it moving forward,” Desmond said.

The federation was also instrumental in advocacy for legislation that enables emergency workers to access workers’ compensation for a diagnosis of post-traumatic stress disorder, Desmond said.

An Act to Support Law Enforcement Officers and First Responders Diagnosed with Post-traumatic Stress Disorder became law in July. “That was big. We’re grateful (the legislation) was signed,” Desmond said.

Recruitment and retention remains a major issue for volunteer departments throughout the state, and the federation is actively working on the issue, Desmond said. 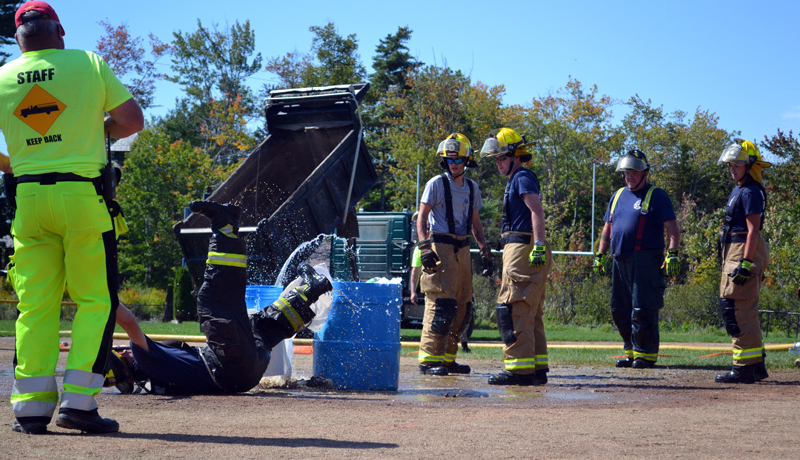 The antics at the convention were an indication of the bond that attracts and retains volunteers in the fire service. Sirens blared and a section of Route 27 in Boothbay and Boothbay Harbor was closed the morning of Saturday, Sept. 9, but not because of an accident.

Fire departments from across the state paraded down Route 27, showcasing fire engines new and old. The Boothbay Fire Department led the parade with a color guard and Grand Marshal Billy Dodge.

The Dexter Fire Department dragged a manual water pump down the parade route, stopping every so often to demonstrate how it worked by soaking their fire chief, as humans dressed as Dalmatian dogs ran through the crowd.

The St. Peter’s Drum Corps, of Torrington, Conn., made a guest appearance at the parade to support Maine firefighters. “Are we in Maine?” the bandleader joked with parade watchers. “We just got on I-95 and didn’t know where to stop.” Parade watchers thanked them for their presence.

The parade was followed later in the evening with a banquet and awards ceremony. Edson Small, of the Winslow Fire Department, and Patrick Pembroke, of the Dover-Foxcroft Fire Department, were presented with the federation’s lifetime achievement award. 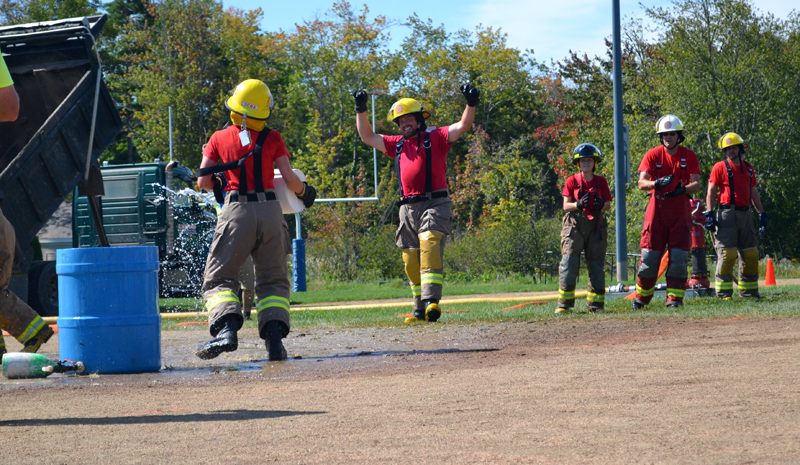 The Southport Fire Department knocks a lobster buoy out of the bucket during the mystery competition, part of the muster during the 54th annual Maine State Federation of Firefighters Convention. (Abigail Adams photo)

Firefighters gathered Sunday, Sept. 10 at the Boothbay Region High School athletic field for the highly anticipated muster. Twelve departments competed in events that included assembly of a dry hose, assembly of a wet hose, and a mystery competition the teams were informed of only minutes before it started.

There was some good-natured ribbing among the teams as they ran, fell, fumbled, and masterfully completed each competition. The mystery competition involved selecting one of a series of props to plug a bucket full of holes, then running a relay race using the bucket to fill a large container with a lobster buoy in it.

“It’s a lobster buoy because we’re in Boothbay Harbor,” said Gerry Gamage, Southport fire chief and referee for the muster. The winner knocked the lobster buoy out of the large container in the least amount of time. The teams gave each other helpful hints about how to best complete the competition.

Winning the water ball competition at the muster is a source of pride for fire departments, an announcer said. After three rounds of using a hose to hit a ball suspended on a rope to the opponent’s side, the Newcastle Fire Department emerged victorious.

The convention doesn’t just bring firefighters together, it also brings friends and family together, Desmond said. “This is about the friendships,” he said.