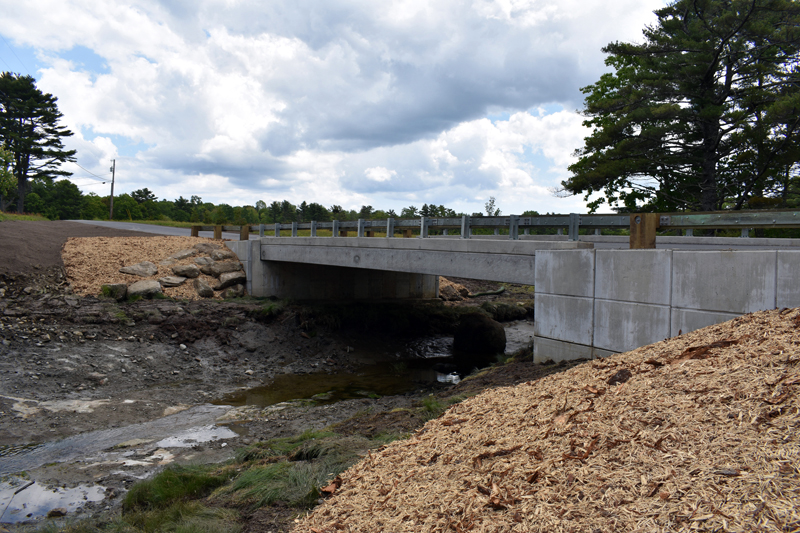 Bremen town officials and the family of the late Horace Ransom officially opened the Heath Road Bridge with a dedication and ribbon-cutting ceremony the morning of Saturday, July 7.

The bridge was dedicated to Ransom, who was a longtime resident of Heath Road and a leader in the town’s fire department, according to Selectman Hank Nevins.

Nevins welcomed attendees to the ceremony and thanked Lincoln County Planner Robert Faunce and Damariscotta contractor Hagar Enterprises Inc. for their work to replace the bridge over Smelts Brook.

“We needed to do it. The last bridge was falling apart and there are good people living down here,” Nevins said.

Nevins described the construction project as the biggest in the town’s history in terms of cost.

The project cost around $495,000, according to Nevins. The Maine Department of Environmental Protection contributed a $95,000 grant to improve fish passage.

In addition to the bridge, the project included the construction of steps to the water, which will enable shellfish harvesters and kayakers to reach Broad Cove.

Nevins said he met Ransom upon joining the volunteer fire department in 1988.  “For me, as someone who was new in town, Horace was one of the nicest guys you could ever meet,” Nevins said.

Nevins said Ransom, a U.S. Navy veteran who served as a lieutenant junior grade in World War II, helped the department grow from having a fleet of three old military trucks to what it is today. Ransom was a member of the department for 27 years.

“He was a friend, a good friend of mine,” Nevins said.

“My dad would be very proud to have you all here today,” Ransom said.

At the conclusion of the ceremony, Carol Ransom and her sister Judith Ransom cut a ribbon across the bridge’s entrance to officially open the bridge.

Nevins said construction of the bridge was completed around June 10.

According to Nevins, the old bridge was named the Chaney Bridge after a nearby farmhouse, but was often referred to as the Heath Road bridge.

“We took down the Chaney Bridge and this one is the Heath Road Bridge,” Nevins said.