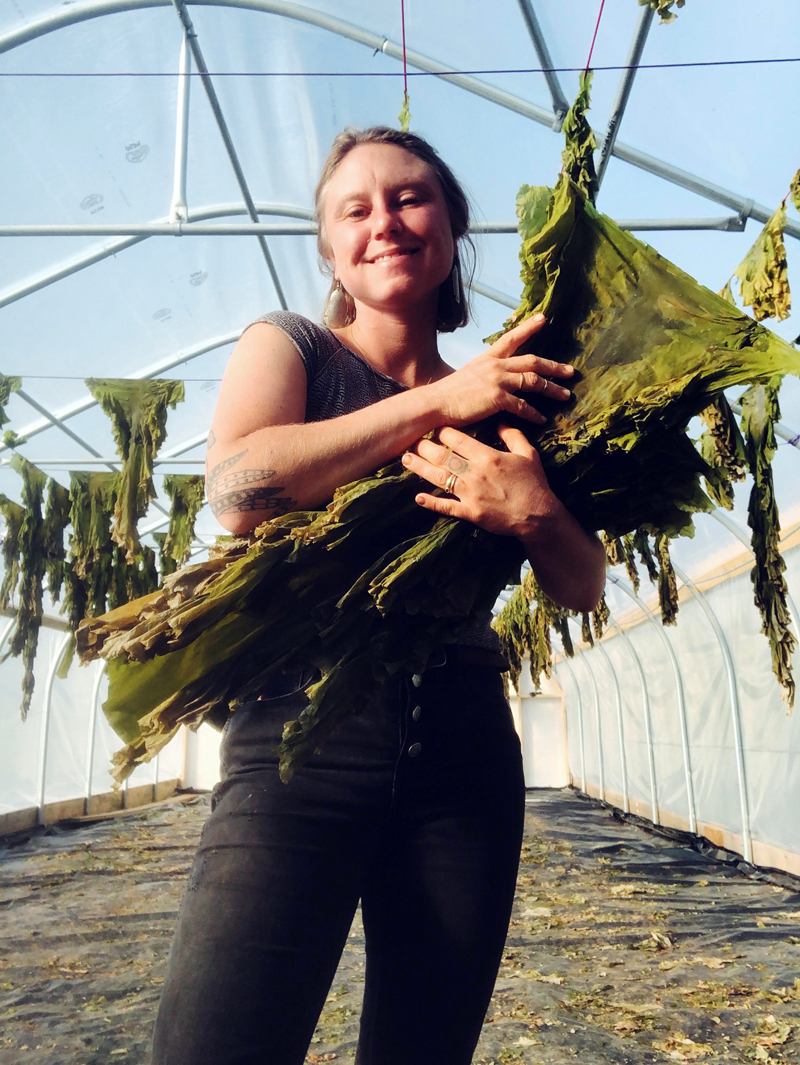 A Bremen farmer recently harvested her first crop of sugar kelp, which she describes as nutritious, tasty, and good for the environment, from her new aquaculture operation in Muscongus Bay.

“It is a species that is native to Maine and is fascinating in a lot of different ways. It grows in bays, coves, and harbors, and variations of the species look very different from one another,” Wineberg Thorpe said.

The appearance of the brown algae differs depending on geography, even along the Maine coast.

“There are local variations. They’re the same species, but Down East the sugar kelp is wide and deeply dimpled, and in Harpswell, it is thinner and skinnier, and not dimpled a lot,” Wineberg Thorpe said.

Wineberg Thorpe’s farm “is shaped like a giant letter H with anchors on the sea floor,” she said.

The sugar kelp itself grows on the horizontal portion of the H, about 8-12 feet underwater.

Kelp in the Pacific Ocean can grow at prodigious rates, according to Wineberg Thorpe. In Maine, sugar kelp grows throughout the winter at a more measured pace than its relatives in the Pacific, about an inch per day.

“The primary growing season is the winter. Kelp grows a little bit throughout the summer, but gets biofouled and ragged through the summer months. The clear water of winter is a better time for the kelp to photosynthesize,” Wineberg Thorpe said.

For this reason, she seeds the farm in October and harvests beginning in late February.

“In the summer months, the rich Labrador Current brings phyto and zooplankton that make the Gulf of Maine such a spectacularly rich body of water. These make the water cloudier, not as good for photosynthesis,” she said.

The location of the farm was important. Wineberg Thorpe lives in Bremen, but the water quality in the bay and its mineral-rich nature were important factors too.

“The ocean sugar kelp grows in, how clean it is, is very important. I chose the site because there was wild kelp growing really beautifully there and it was important for me to be near Hog Island, that’s been in conservation for about 100 years,” Wineberg Thorpe said. Her business has a conservation focus, with the intent to add to and preserve the water quality of the area. 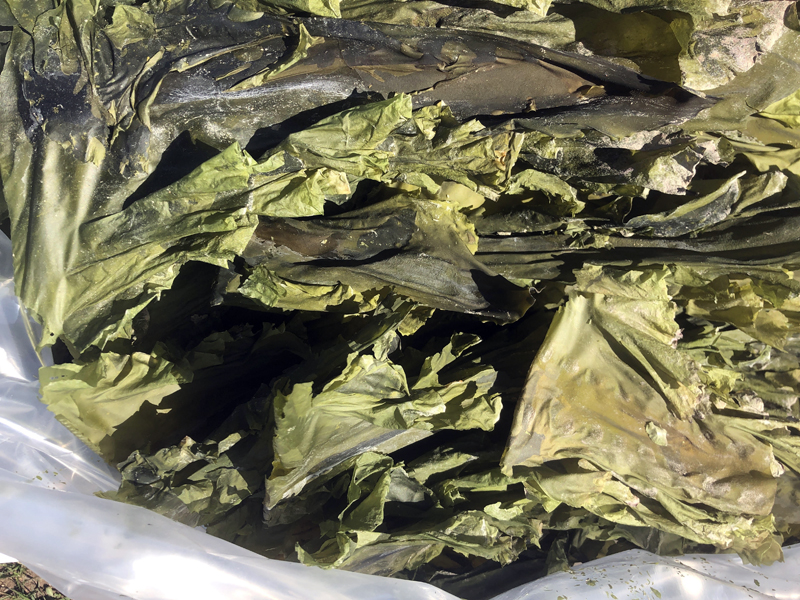 “Sugar kelp is not only good for you, it is good for the environment. It breathes in carbon dioxide and breathes out oxygen, adding oxygen to the water,” Wineberg Thorpe said.

She describes sugar kelp as a tasty snack, loaded with nutrients and a pleasant “umami” – a Japanese word describing a taste besides sweet, sour, salty, or bitter.

“Seaweed has a lot of umami. … It has a unique taste, much milder than people expect,” Wineberg Thorpe said.

The crop is far removed from the seaweed many people think of when they hear the word – the pungent-smelling stuff strewn on beaches and rocks at low tide.

“The seaweed out in the sun is more like a vegetable for a compost pile. It is not the seaweed you are going to eat. That’s fresh seaweed from the water with a taste that is fresh, natural, and salty,” Wineberg Thorpe said.

Wineberg Thorpe has been drawn to the ocean from an early age. She grew up in Jamestown, R.I., on an island in Narragansett Bay.

“I spent a lot of time as a child on the beach, looking at tide pools,” she said.

She went on to study at the College of the Atlantic in Bar Harbor and lived on a sailboat in Northeast Harbor.

“Once the summer residents left, it was just me and the lobstermen. I’ve always been an introspective person and I spent a lot of time looking at the seaweed, figuring out what species were good to eat,” she said. “All the seaweed in Maine is edible, but some types are better than others.”

“The kelp is harvested first thing in the morning, 4 a.m., into sanitary fish totes. I then bring it home to my house in Bremen and dry it in my 50-foot greenhouse, equipped with wood stove. The kelp is dried completely and is shelf-stable for at least a year,” she said. 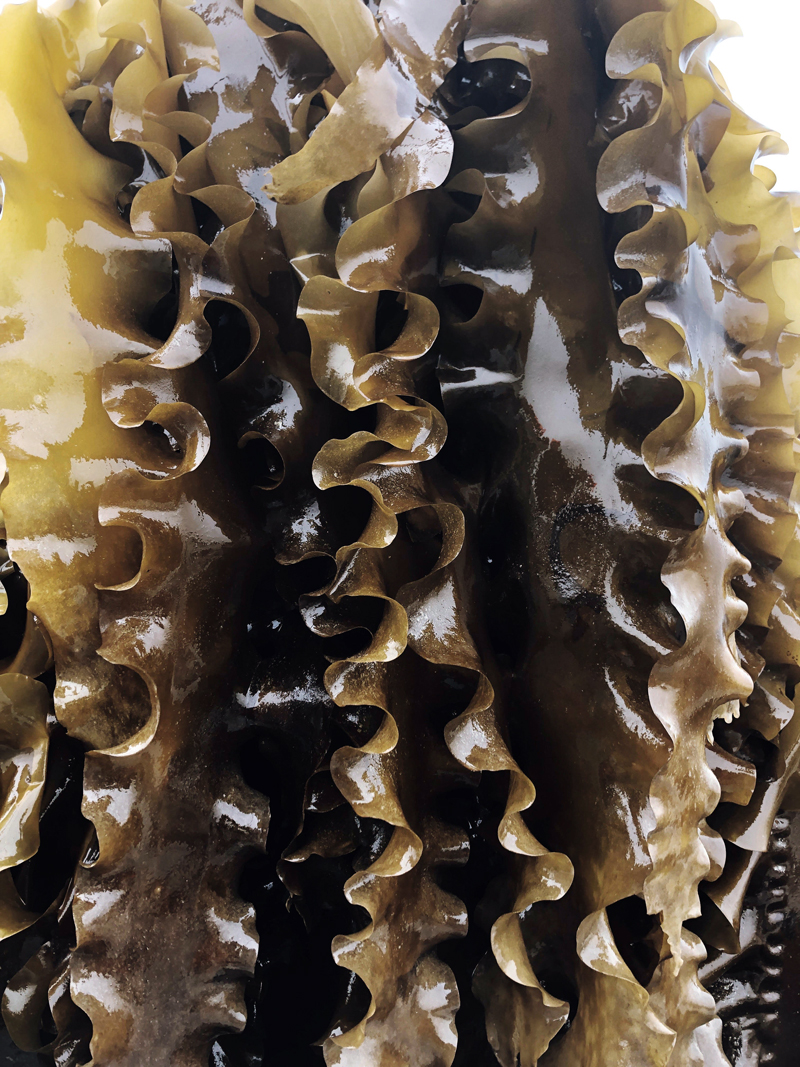 “I choose the day I go out and harvest,” she said. “There is an old Scandinavian saying that there is no such thing as bad weather, just inappropriate clothes.”

Wineberg Thorpe said she seeded the seaweed farm in October and was getting ready to harvest when the COVID-19 pandemic struck.

Despite the circumstances of starting a business in a difficult economic climate, Wineberg Thorpe pressed on. COVID-19 delayed her first harvest by about a month.

“I was unable to erect my greenhouse and get the supplies and materials I needed to finish installing vital structures on my boat. Anything I ordered online was delayed by weeks, and the marine supply stores locally were closed,” she said.

She lost about half her crop due to the delay.

“I don’t feel badly about it though, because kelp enriches the marine environment through sequestering carbon and oxygenating the nearby waters. I improved the health of the bay, so it’s not a total loss, even though I’m not being compensated financially for it,” Wineberg Thorpe said.

She is now selling kelp in 3-ounce, 8-ounce, and 1-pound portions.

“I am sending samples of my sugar kelp to local and national companies that make natural food products. I am also selling dried kelp on my online store,” she said.

“If you’re curious about cooking with kelp but don’t know where to start, I have a little homemade cookbook that I am happy to include in any purchase,” she said.

In the future, Wineberg Thorpe hopes to grow scallops at the farm too. She has worked in the aquaculture industry for about nine years and has experience with a number of species, including oysters and mussels.

“They taught me everything they know, which is quite a lot,” Wineberg Thorpe said.

For more information on Swell Seaweeds, find swell.seaweeds on Instagram. The business will soon have a website at swellseaweeds.com.