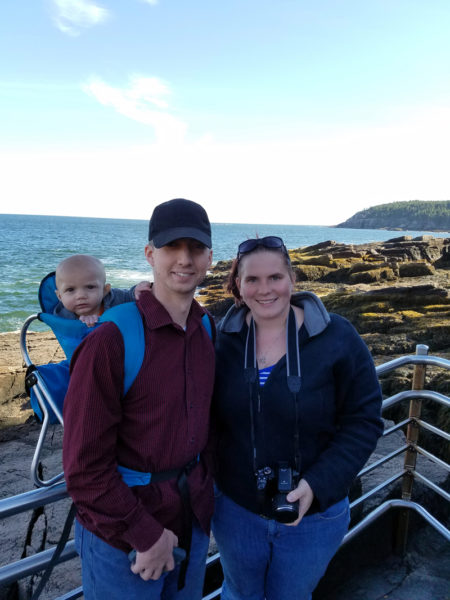 A Bremen man and his 1-year-old son are recovering from a bacterial infection that hospitalized both and caused the man to have a heart attack.

Tyler Richards, 28, and Gideon Richards, 1, have been diagnosed with Clostridium difficile colitis – better known as C. difficile or simply C. diff. Both have been in and out of the hospital over the past weeks.

Harley Richards, Tyler’s wife and Gideon’s mother, said the bacterial infection is not common in young, healthy people, but can be life-threatening if it goes untreated.

Harley said the first signs of trouble came a couple weeks ago when Tyler became very ill, leading to multiple hospital visits and CAT scans. Doctors initially believed he had the flu.

“They gave him fluids and pain medication and told him he had an infection,” Richards said.

She said things took a turn for the worse when her husband was in serious pain early one morning, resulting in his transportation by ambulance to LincolnHealth’s Miles Campus in Damariscotta, where it was determined he had suffered a heart attack. Arrangements were made to transfer him to the intensive care unit at Maine Medical Center in Portland.

Harley said Tyler had blood work done in Portland, which revealed that the bacterial infection had damaged his heart.

After the diagnosis, Harley said she called her son’s pediatrician, since Gideon had exhibited some of the same symptoms as his father. Gideon was tested and the family discovered he had C. diff as well.

Harley said she was put on antibiotics too as a precaution, since she had shown some symptoms of illness, though not as severe as those exhibited by Tyler and Gideon.

She said Tyler was hospitalized for four days, including a couple days in cardiology care. After he was released, Gideon ended up in the emergency room.

“My husband got home on Tuesday and then my son ended up in the hospital on Wednesday,” she said. “They gave (Gideon) fluids, made sure he was hydrated, and then sent him home.”

Harley said Tyler and Gideon are back home and her son is doing much better, but her husband is still recovering from the hospitalizations and rounds of antibiotics.

She said her husband recently had to have blood work done to check his liver function, which doctors believe could have been impacted by the high amount and strength of antibiotics he had been taking to combat the bacterial infection.

As the two continue to recuperate, the family has set up a GoFundMe account to help out with essential costs.

Harley set up the online fundraiser Wednesday, Feb. 15, a day after Tyler returned home from the hospital, to help the family cover expenses.

“I don’t know how long it’s going to be before my husband can go back to work, so the fundraiser is going to go toward rent, heat, and other essential living costs,” she said.

She said she got the idea to start a GoFundMe page after seeing them used in the past to help raise money for medical costs in connection with car accidents and other emergencies.

In addition to the online fundraiser, Harley said donation cans have been set up at two locations in Waldoboro: Bella Gia’s at 1587 Atlantic Highway and Liberty Tree Arms at 65 Washington Road.

To donate online, go to gofundme.com/zt4ne-richards-family.