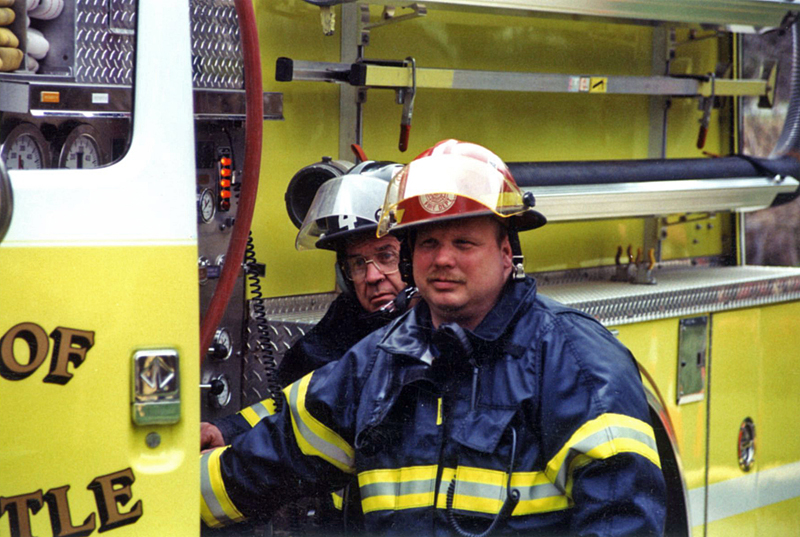 Donnie Leeman (right) stands by the door of a Newcastle fire truck. Leeman was an 18-year volunteer with Newcastle, including serving as assistant chief. (Photo courtesy Newcastle Fire Department)

Donald “Donnie” Leeman, who spent almost 40 years serving Lincoln County as a firefighter for Bristol, Newcastle, and Bremen where he ended his career as the department’s chief, passed away unexpectedly at his home the morning of Saturday, Sept. 17.

Leeman’s history of service to his country and to his community was a fundamental aspect of his character. He valued having what his wife Liz called “the honor of making a difference.”

Leeman, 55, was born in Damariscotta and grew up in Round Pond. As a boy he hung around the fire station and joined Bristol Fire and Rescue as soon as he turned 16. After graduating from Lincoln Academy he enlisted in the U.S. Marine Corps and served in Iraq during the Gulf War. 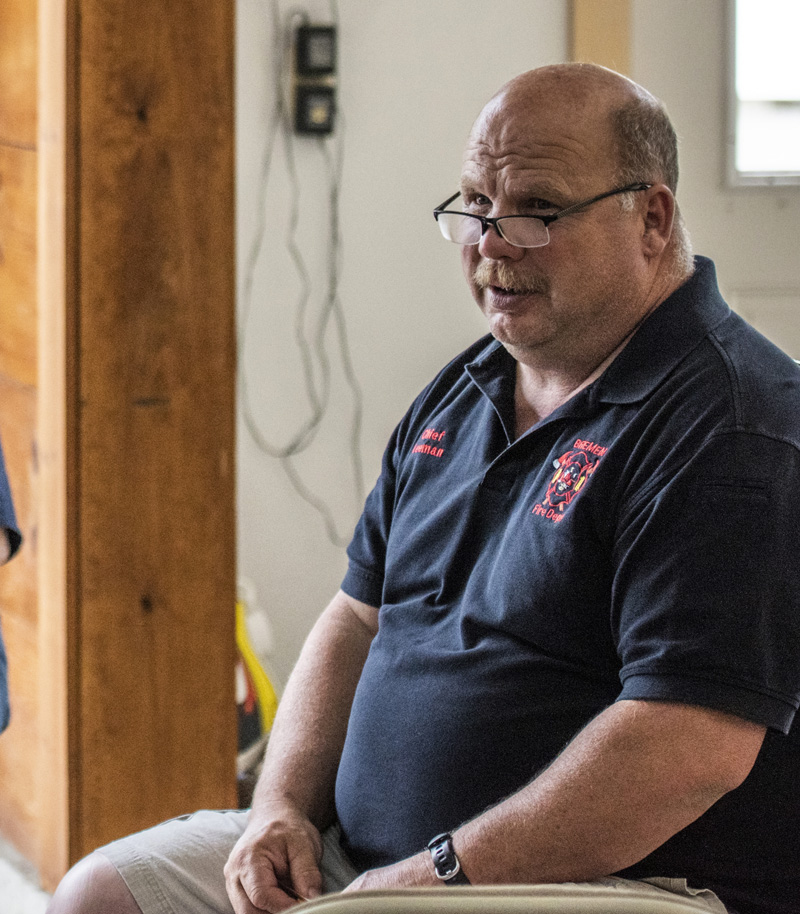 Leeman led the Bremen Fire Department for five years, through a time of diminished staffing while facing record numbers of calls and helping shepherd his community through the COVID-19 pandemic.

Interim Chief Bruce Poland, a 40-year veteran of the Bremen Fire Department, said Leeman was “a super chief, involved in everything.” According to Poland, Leeman took the lead on replacing the department’s 25-year-old pumper truck. The new state-of-the-art pumper, slated for delivery in October, had every feature chosen with Leeman’s goal of improving firefighter safety.

As chief, Leeman was instrumental in expanding Bremen’s mutual aid coverage, proposing the town enter into an agreement with the Friendship Fire Department that brought with it access to a fire boat. The board of selectmen approved the proposal in February 2019.

Wendy Pieh, chair of the Bremen Select Board, said Leeman was a great chief who always had his paperwork in order and always came prepared to selectmen meetings.

“We had complete trust in him running one of the most, if not the most, important departments in town with all volunteers – just an amazing group of people,” she said.

Former Bremen Selectman Hank Nevins worked closely with Leeman and called him “one of the best fire chiefs in the whole county.”

Nevins said Leeman’s experience in fire service and as an emergency medical technician made him a great trainer.

“It was a good fire department,” Nevins said. “But he built it up to a really great fire department with his knowledge on how to fight fires and how to train firemen.

“It is the whole area, not just Bremen. He’s done a lot for the communities around here,” Nevins said. “I wish we had more people like him in this world.” 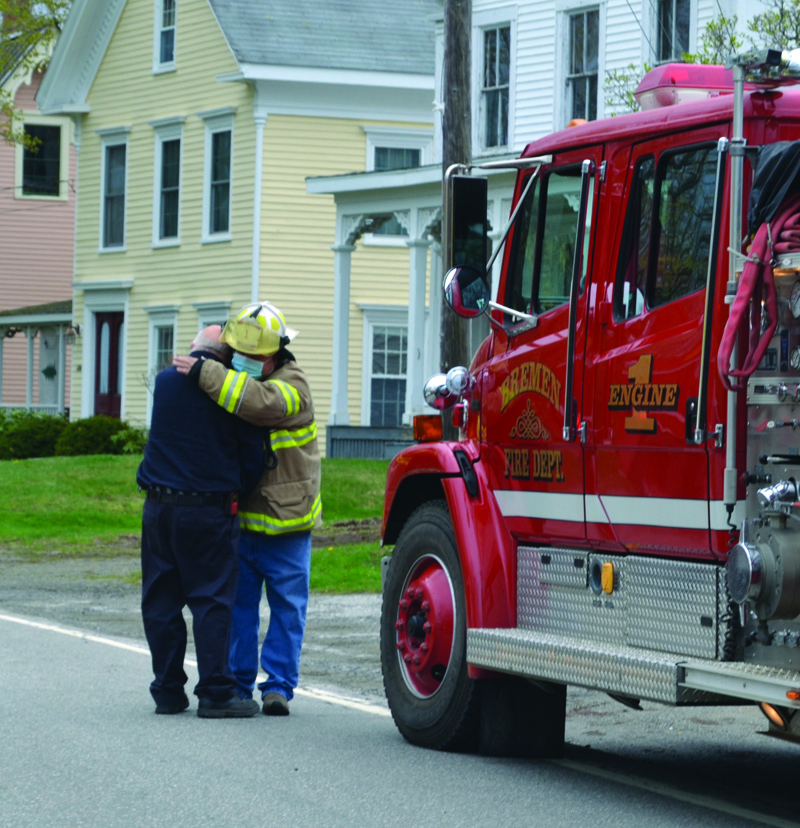 When not serving the community, Leeman’s early career included working for Puckey’s Oil and the Maritime Farms gas station and convenience store, both in Newcastle. He managed Carquest Auto Parts in Waldoboro for a time, and spent the last 10 years at Colby & Gale as a propane delivery technician.

Matt Poole, president of Colby & Gale, said Leeman was a big part of the team throughout his tenure.

“He’s just an awesome guy and everybody here loves him. Donnie was the kind of guy you could tell at 4 on Friday that there were a couple more deliveries … and he’d laugh about it and say ‘no problem,’” Poole said. “When he wasn’t here all he cared about was his wife and his son Ben. You can’t replace people like him. There’s only so many of them around.”

Leeman worked briefly for the Damariscotta Police Department and from 1995-2005 he worked as an intermediate EMT with Central Lincoln County Ambulance Service where he met his wife.

The couple married in 2002 and raised their son Ben in Bremen where they lived for the last 20 years.

“The three of us were a tight family,” Liz Leeman said.

Liz knew her husband loved being a firefighter, although it was stressful for her.

“As a chief you don’t always have to fight the fire but he wanted to be right there in the thick of it,” she said, adding that Donnie Leeman enjoyed putting to use the skills he’d spent his life developing. 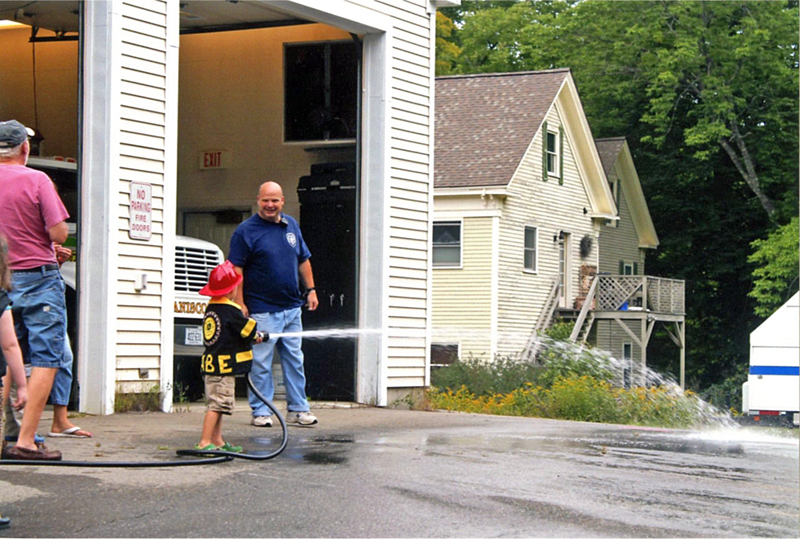 “He was always happy when they saved a house,” Liz Leeman said.

Giving back to the community was a guiding principal that Liz Leeman said her husband strongly believed in.

“Nothing was ever too important for him to interrupt his plans to go help. That’s what you do. You help people,” she said.

There was more to the job than fighting fires. As chief, Donnie Leeman supervised a wide range of emergency responses, from providing traffic control during crashes to rescuing a snowmobiler that went through the ice on Biscay Pond.

Sometimes the duties were fun, like participating in large-scale training with controlled burns, meeting the community during town fundraisers, and spending time at the Great Salt Bay Community School during Fire Safety Week.

“He enjoyed watching the kids crawl around the fire truck. He would sit in the cafeteria and eat with them and they would ask him questions. He loved that,” Liz Leeman said.

In his down time Donnie Leeman was an avid bird hunter. Liz Leeman said he always looked forward to a Columbus Day tradition where he and his son would go “up the county” bird hunting.

Father and son were very close, according to Liz Leeman. They spent weekends together while she worked as a charge nurse at Quarry Hill, an extended care community in Camden. 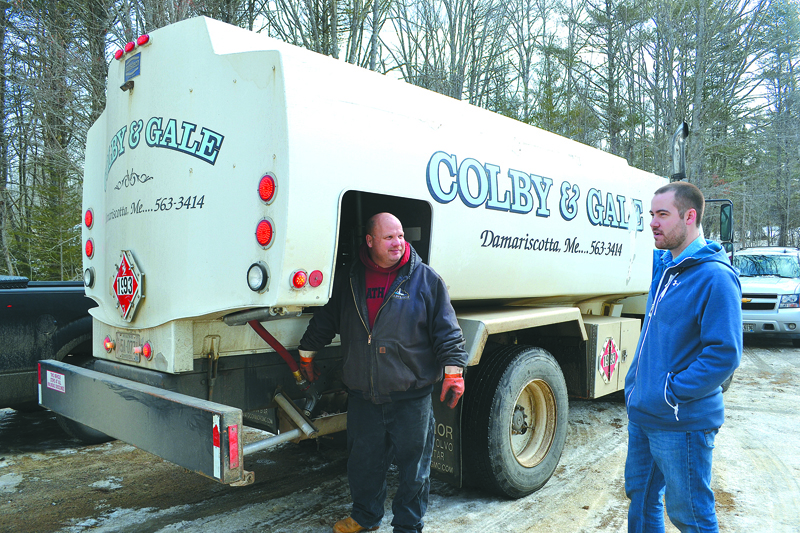 Ben Leeman graduated from Lincoln Academy and is currently finishing basic training for the army. He has been granted leave and will be able to attend his father’s memorial service.

“Donnie was so proud of our son,” Liz Leeman said. “Very, very proud.”

Travel was another passion. The Leemans traveled as a family throughout the U.S. and into Canada and the Caribbean. Liz Leeman said it was important to introduce their son to other cities, other cultures.

“There’s more world outside Midcoast Maine,” she said. “It’s a great place to live but you need other experiences as well.”

Liz Leeman said she and Donnie had plans to travel as a couple in the future. They wanted to go to Alaska. They wanted to travel overseas. Donnie Leeman wanted to show his wife the places he saw as a Marine, including Japan, Okinawa, and the Philippines.

While his death was sudden, Liz Leeman takes comfort that he died at home, that he never had to spend time in the hospital.

Lincoln County Fire Chiefs Association President Mark Carrothers said the Bremen chief “was a consummate professional in his role as chief and all the other officer roles he’s had in multiple departments.” Carrothers said training and mutual aid were Donnie Leeman’s “No. 1 and No. 2 passions.”

Paul Leeman Jr., retired fire chief for Bristol Fire & Rescue, has known Donnie Leeman since before the beginning of his fire service career when the Bremen chief was just a kid hanging around the Bristol station.

“He had a real quick knack for picking up information,” Paul Leeman said. “He was just a true joy to have around and to teach what we knew from firefighting back then.” 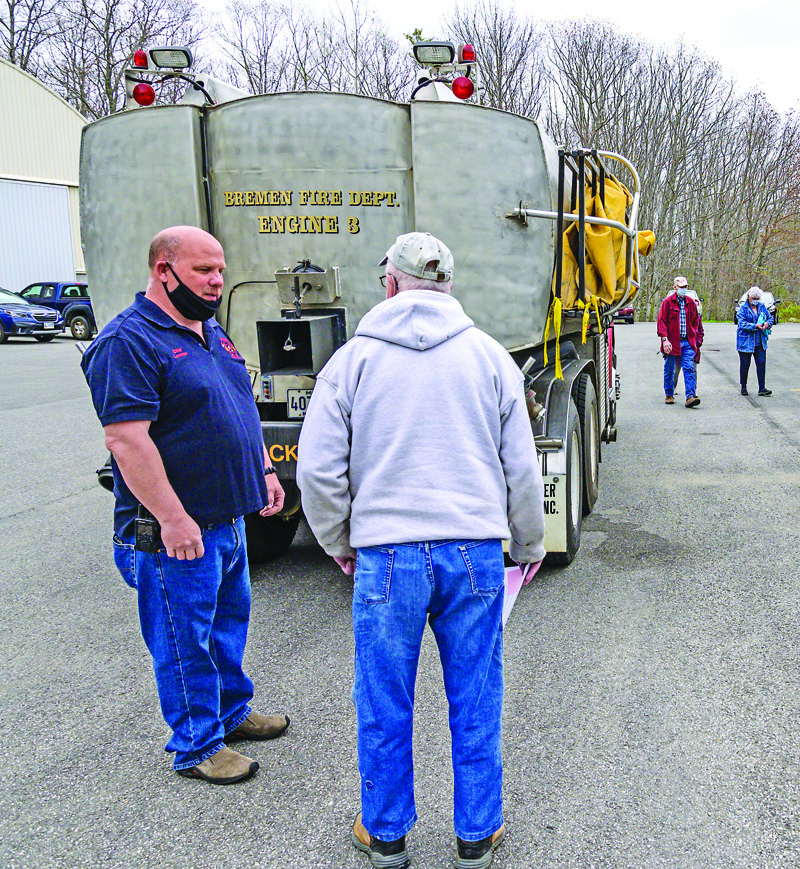 Bremen Fire Chief Donnie Leeman (left) explains his safety concerns about Engine 3 prior to a special town meeting on May 8, 2021. Voters ultimately approved the purchase of a new truck, which will be delivered this October. (Bisi Cameron Yee photo, LCN file)

Paul Leeman, like other Lincoln County fire chiefs, relied on Donnie Leeman and the Bremen Department when mutual aid was needed during larger fires.

“When we would call Bremen we knew our water supply would be taken care of,” Paul Leeman said. “Donnie was so good with pump operations and leading his men to supply us with thousands of gallons of water when he was on scene at a fire. He just didn’t stand there as a leader unless necessary. If he came to Bristol he’d be willing to do absolutely anything, picking up hose, whatever needed to be done.”

Paul Smeltzer, chief of the Waldoboro Fire Department, said Donnie Leeman was a good friend as well as a colleague.

Donnie Leeman was “one of those people … who instantly felt like part of the team,” Smeltzer said. “He fit right in at any level. He treated firefighters the same as he treated officers.”

Recently Smeltzer worked with Donnie Leeman training firefighters on pump operations in Bremen. “Even though he knew all the systems so well he was open to accept new information and to think outside the box to make the experience as good as it could be for his department,” Smeltzer said. “He always took time in his quiet professional way to help lead us. The county (has) suffered a huge loss.”

Newcastle Fire Chief Casey Stevens, who worked with Donnie Leeman in the Newcastle Fire Department for 15 years, called Leeman “a good mentor” for a lot of firefighters.

“You have to have built confidence in each other when you’re a firefighter and be able to trust the guy that’s beside you,” Stevens said. “I always, and I’m sure other people always, trusted having Donnie beside us when we were responding to the calls knowing that he was well-trained and had our back.”

A memorial service will be held at 11 a.m. on Saturday, October 1 at Lincoln Academy in Newcastle. The family asks that, in lieu of flowers, donations be made to the Bremen Volunteer Fire Department or to the Central Lincoln County YMCA.