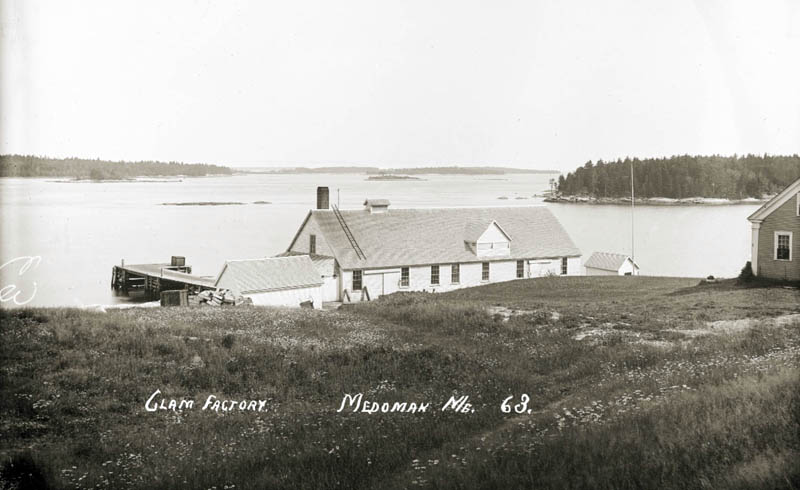 The Burnham and Morrill Co. clam factory, built circa 1900. According to the Maine Memory Network, 40 to 50 Bremen men took up clamming after the factory was built, while women were employed inside steaming and picking meat from the shellfish. The factory closed in 1940, was used to buy and sell clams then lobsters through the late 1950s, and is currently the site of Broad Cove Marine Services. (Photo courtesy Maine Memory Network)

The flats, exposed at low tide under a light rain. The sensation of the sea turned inside out. They are almost lunar. But they are not. They are right here, in Bremen, on earth – providing.

It is too wet, nearly too cold, and the tide too high for diggers. A few hours later, it is just right. Then, so swiftly, they disappear again. Footprints receding in the heavy mud of the Broad Cove flats, as if leading into the low water.

“That’s the richest clam flat in Bremen,” said fisherman Dale Witham, who goes by the nickname “Jap.” From Bremen, Witham has worked across fishing industries, including digging clams for decades.

Witham speaks from a lifetime of experience. He remembers fishing and clamming through an era of industry on the Medomak, with the Paragon Button Factory, Medomak Canning Co., and the Sylvania lightbulb factory, whose manufacturing buildings were torn down in 2006.

“It was a better business,” said Witham. “People put their kids through college clamming.”

They clammed through regulatory and environmental changes. Through the opening and closing of the cannery, the arrival of new species, the death of other fisheries and of elders in the industry’s community.

Now, the cove faces seasonal closures from Maine Department of Marine Resources after fecal indicator bacteria were detected a few years ago, without a clear source. Last year, the town of Bremen contracted environmental consulting agency FB Environmental to conduct research into the origin of contamination. The research proved the first wave in a larger investigation. In February, the Bremen Shellfish Committee discussed contracting Midcoast Conservancy to conduct further research into the contamination.

While Witham and other fishermen and clamdiggers offered to help the process move forward in any way they could, they also expressed concern about an investigation that doesn’t consider remediation as it goes.

“Why not fix it as you find it?” said Witham, especially when, in his estimation, the general source is known.

Midcoast Conservancy Director of Water and Communications Tim Trumbauer offered to share any and all findings with the town as their research progresses, but said it was important to focus on determining the exact origin first.

Witham, who attended the Shellfish Conservation Committee meeting on the issue, offered to help on the ground if needed. As did other clammers. 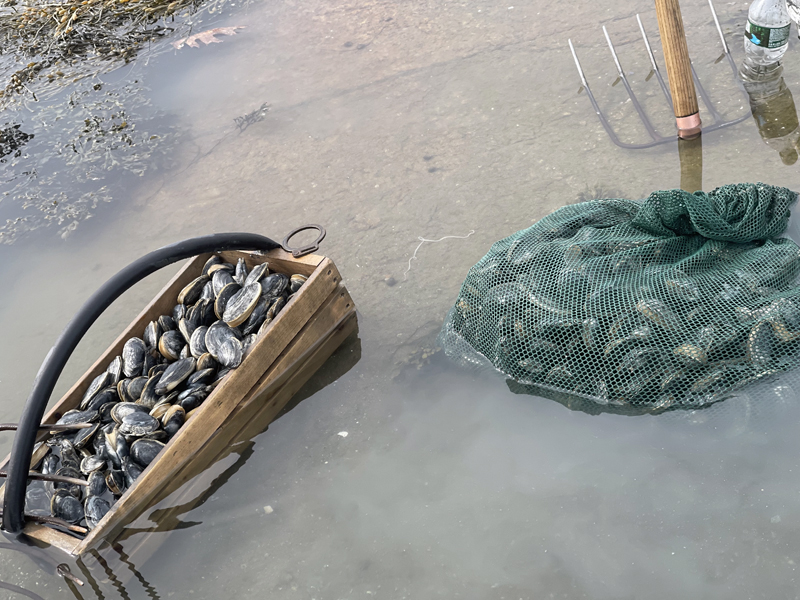 As part of fishing culture, the clamming industry has changed significantly over the years, according to Bremen fisherman Dale Witham. (Photo courtesy Dale Witham)

Witham has fished out of Rockland, clammed off Vinalhaven, down to southern Maine in Casco Bay, scalloped Downeast, and elsewhere. He described the way he used to travel, which has become harder and harder to do, with newer restrictions. Plus, it never used to be as separated as it is now, he said.

“We used to do everything, now they want to box us off,” he said. To state regulators, you’re a clam digger or a lobsterman or you ground fish etc., he said. “But hardly anybody went ‘just clamming.’”

Witham has harvested rockweed, urchins, lobster, mussels, scallops, clams, alewives, ground fish, herring – to name a few. “That’s what you did,” he said, especially as a kid. “And you were lucky to be doing it.”

He recalled a childhood connected to the land and water. Learning how to fish and dig from older boys. He recalled buses freighting people to the blueberry barrens, to rake the low-growing fruits. He recalled harvesting rockweed, when the commercial market was still led by hand harvesters. And when the regulations changed, being excluded from those changes.

“Now all they care about is lobstering, aquaculture … people don’t want to see the rougher side or hear from diggers,” said Witham, referring to both the Department of Marine Resources and the general public. He described DMR as like-minded, and in his experience, uninterested in people who sound like himself. Who are practically from these waters. Citing frustrations with the lottery system for licenses, he said, to those in charge of the licensing: “How would you feel if your job was in a lottery?”

“Fishing was a community at one time,” said Witham. “We didn’t talk about money … you’d get fired instantly if you told someone how much you made,” or reprimanded another way, he added.

He gave the example of urchin divers, who would dive off lobstermen’s boats in the winter, calling it “a good little marriage.”

Water in the cove may be cleaner than it used to be – but until the source of fecal indicator bacteria is discovered, harvest is still seasonally blocked.

Witham also worries new development of properties along the water and newly occupied old structures – with septic tanks that have been out of use for years – will strain septic systems, limit access points to the cove, and all-in-all alter the environment. Septic is much better than it used to be, he noted, but still a problem. He also worries about agricultural runoff.

There are still enough people digging clams to supply local shellfish buyers and sellers. There are still enough to populate the town’s Shellfish Conservation Committee. But Witham said it’s nothing like it once was. He recalled over 450 clam diggers active in Waldoboro, when he was a teenager. “People dispute it,” he said – but that’s what he remembers. The footprints receding into the flat suddenly seem an apt metaphor for the clam diggers.

During peak harvest season, there were almost too many clams to sell, Witham said. 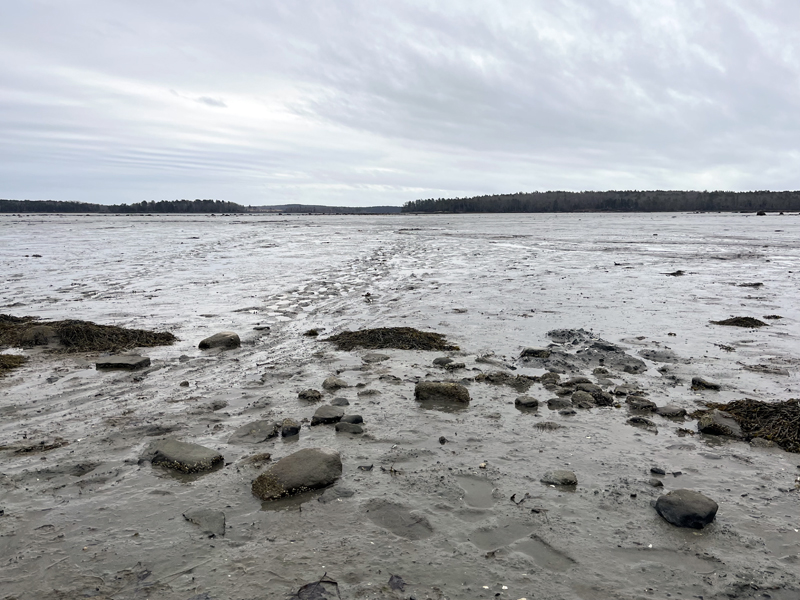 Still, the water was dirtier. Witham remarked that the surface – and below surface – scene was different: Floating bodies of dead fish during the 1970s, visible pollution, etc. As if it was an obvious or inevitable fact. Then again, maybe it was: The flats were once downriver from three factories and at the mercy of direct septic drainage.

But not yet clean enough, according to the Department of Marine Resources, after the detection of fecal indicator bacteria.

Contamination – and changing regulations, popular interest, and time – are not the only challenges clam diggers face.

In addition to green crabs, ribbon worms – a class of worms called Nemertea – have proliferated here in recent years, stressing the clam population – and those who dig them.

“Where the clams end, the worms start,” said Witham. In the flats, he said, the long, pink worms have encroached on the areas where harvesters dig. The worms “turn a clam into a smoothie,” Witham described.

From above, the flats unfurl grey, blue, brown, green, temporarily exposed. No ribbon worms or clams in sight, buried beneath the surface, breathing and moving and living in their creaturely ways. This belongs to no one, in Witham’s view. Or everyone. Not just the flats, but other fisheries, too. Other elbows in the river, other places where fish or shellfish still gather. And the ones who seek them.

He has started digging again, the ground and air thawed enough to tolerate. For Witham, digging clams has never been a primary occupation, just “something you did” as a fishermen. Other clamdiggers are back out there, too. Only a few months before the Broad Cove flats are closed to harvest. So the research will begin, too, a hopeful – and urgent – pursuit.