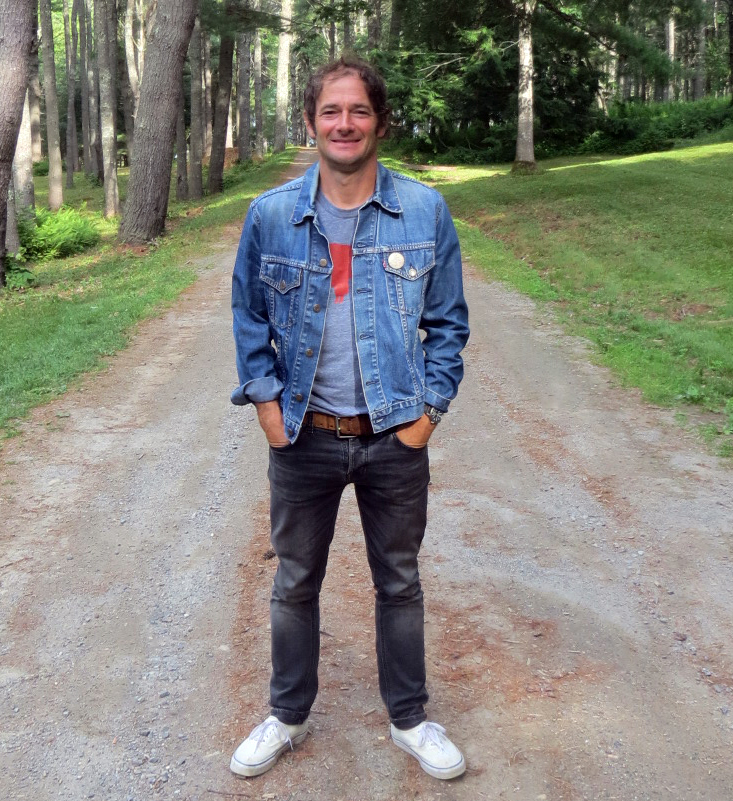 Musician John Stirratt, of Wilco and The Autumn Defense, at home in Bremen. Stirratt will perform with The Autumn Defense in Boothbay Harbor on Thursday, July 26, and with members of the Maine Youth Rock Orchestra in Waldoboro on Aug. 1. (John Maguire photo)

Folk-rock singer and musician John Stirratt, of Wilco and The Autumn Defense, finds inspiration in the woods and coastline in Bremen, where he lives with his family year-round.

Settling down in Bremen, some might think, could mean slowing down for a 50-year-old musician, and some might think life in the Midcoast could lose its gloss for the Stirratts, who have been visiting this area for the past 20-plus years. “But that hasn’t happened,” Stirratt said.

When he’s not touring the world with Chicago-based alt-rock band Wilco or The Autumn Defense, Stirratt sails the coast with his 11-year-old daughter, Telula, and wife, Crissy, and spends time with his in-laws, who live just across the bay. He donates his time to support a local theater and works on a musical score for a documentary-in-the-making.

The Autumn Defense, a folk-rock band Stirratt formed with fellow musician Pat Sansone, will perform at The Opera House at Boothbay Harbor on Wednesday, July 25. For tickets and more information, see boothbayoperahouse.com.

“It’s something I wanted to put together to get the guys up here,” Stirratt said from his home in Bremen. His fellow musicians, who perform for Wilco and also join The Autumn Defense on various gigs, are often on tour and their schedules are tight, he said. “I thought it would be casual, and a fun thing to do.”

“Casual” and “fun” are good descriptors for these musicians, particularly Sansone and Stirratt. Any YouTube clip of The Autumn Defense (such as “Live from Sugar Hill Studios”) shows they hardly look at one another as they play guitar and sing. In practice and during live performances, they bend and weave like branches of the same tree in a strong wind.

“I’ve been lucky to have this super musical family,” Stirratt said, remarking on the symbiosis band members have. “Rehearsal can be very brief, after so many hours playing together. It’s really second nature.”

Their music has been described as “alt-rock,” “folk-rock,” “folk-pop” and “alt-country” by reviewers online and in print publications. On their 2004 album “Circles,” the song “Silence” fits some of those descriptions.

A YouTube video shows band members on synthesizer, guitar, shakers/cymbals, and drums. Sansone, leading the vocals on this song, may remind listeners of John Lennon, but he has his own folk-rock twist that seamlessly accompanies the instrumentation.

Stirratt confirmed what listeners might already suspect; that their music is inspired by great bands like the Beatles and musicians like Bob Dylan. He said underground cinema and alternative music of the 1960s and ‘70s were also strong influences.

Growing up in New Orleans, Stirratt was immersed in music, on the streets as well as on local radio. “New Orleans is so full of life,” he said. “Music is just everywhere, and it can inform what you do.”

“All that time I was watching a ton of movies,” he said, mentioning film directors Nicholas Roeg and Brian De Palma. “This cross-pollination of art makes you want to create more art.”

Stirratt had performed with Wilco and demoed several songs on their first record, he said. But in 1999, Stirratt found he needed another outlet for the songs he was writing. He met up with Sansone, who was also living in New Orleans. They would often run into each other at a local guitar shop and talk about their own music. Sansone and Stirratt collaborated in forming The Autumn Defense and put out their first album, “The Green Hour,” in 2000.

As for how they came up with the name, Stirratt explained that it sounds like their music: sort of wistful, “autumnal.”

“Nature is kind of hard to compete with in terms of inspiration,” he said, once again remarking on his satisfaction in moving to Maine to live year-round. He lived in Chicago while performing with Wilco and would spend summers in Bremen with his family.

“Chicago is amazing, beautiful. The people are great,” he said. “But being here, we found it harder and harder to go back.” Stirratt said he and his wife wanted to live closer to her parents.

He said curiosity and inspiration are what drives him in music and life. “My father-in-law has always remained curious. He’s always learning and has been an inspiration.” Stirratt extends what he learns from others and from nature to audience members, as well as to aspiring artists.

He will perform solo with the Maine Youth Rock Orchestra at the Raising The Roof barn party to benefit the Waldo Theatre in Waldoboro on Aug. 1. The event will be held at Tops’l Farm, 364 Bremen Road. (For more information, see https://waldotheatre.org/pages/barn-party.)

The Autumn Defense will give a number of other performances in Maine and New England: at The Stone Mountain Arts Center in Brownfield, Maine, later in Boston, and finally at the Newport Folk Festival in Rhode Island.

The exchange of energy he has with the crowd is what Stirratt loves most about performing. “I really feel charmed,” he said, remarking on the time (some 25 years) he has performed with Wilco and The Autumn Defense combined. “That’s half my life.”

For a full schedule of their performances and to learn more about the band, see theautumndefense.com.