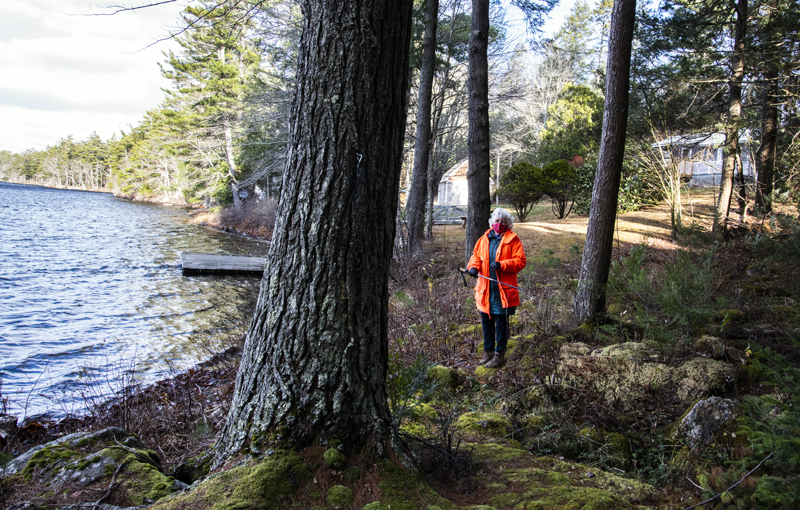 Mary Berger stands within the boundaries of the Weston Memorial Spring property in Bremen on Nov. 18. The Bremen Conservation Commission says the strip of town-owned land serves as a natural buffer that filters stormwater runoff from adjacent properties into Biscay Pond. (Bisi Cameron Yee photo)

A diagonal corridor, 8,275 square feet in area, slices between two homes on Fogler Road, on the shore of Biscay Pond. Neither the Weston Memorial Spring nor the narrow strip of land on which it sits belongs to either homeowner. It belongs to the town and the townspeople of Bremen.

According to a March 1, 1926 deed, “said land and spring … are conveyed to inhabitants in Bremen in memorial to Cyrus and Nancy Weston so that said spring and land surrounding and leading to it may always be open and free to the use of the public under such regulations as may be deemed proper by said inhabitants of the town of Bremen, said premises to be known hereafter as the Weston Memorial Spring.”

Bremen resident Mary Berger wants to see the site remain a memorial, not just to the Westons, but perhaps to a way of life. And not just as a spring, but as a symbol of the value of fresh water, a reminder of the importance of one of the world’s most precious resources.

“I remember when a gallon jug was really heavy,” said Berger, who grew up on the shores of Biscay Pond. In 1947, Berger’s father, Richard W. Bryant, started Camp Biscay, a boys camp on Fogler Road. Berger recalled taking the family’s woody station wagon and parking on the side of the dirt road to walk down and collect drinking water for the camp.

She was perhaps 5 at the time, but can still describe the beautiful walk through the woods, carefully scooping the water from the well, how cool and clear the water was, how it tasted. “It was mesmerizing for me as a child,” she said. “I had to walk back to the road as a little tyke, carrying those jugs of water.” It’s a memory that has stayed with her throughout her life. 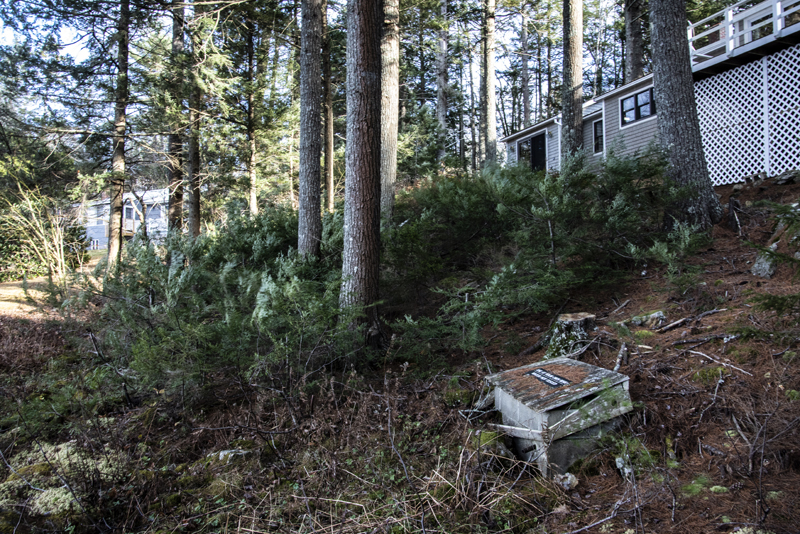 The Weston Memorial Spring remains accessible from Fogler Road in Bremen. The spring was once a source of potable water for Camp Biscay and local residents, but pollution has rendered the water unsafe to drink. (Bisi Cameron Yee photo)

Matthew Hanly, also of Bremen, grew up on the pond too. He went to the spring to get water every weekend. “We would motor over in a rowboat with a three-horsepower engine, pull up to shore, and immerse our jugs in the best cold water. The spring was beautifully clear, mossy, just a beautiful natural spring seeping up from the ground,” he said.

Berger has many happy memories of the spring and the pond, and she’s not alone. She said that when she writes or talks to people who grew up in the area, they are glad some of the traditions continue, that kids still gather on what she calls Turtle Island.

“That was the place when I was a teenager,” Berger said. “I would get in my little boat, find other kids — the island was a magical destination.”

“We would gather on Friday nights to water ski, roast marshmallows, cook hot dogs, swim, meet each other. Jumping, not diving into the water — we knew there were rocks. Nobody got hurt ever,” Berger said. “If we invited many more we would sink the island.”

Berger remembers that the teens thought of the island as isolated, but parents around the waterfront kept an eye out. “We felt like we had free range, but we were always supervised from the shore — nothing bad ever happened there.” 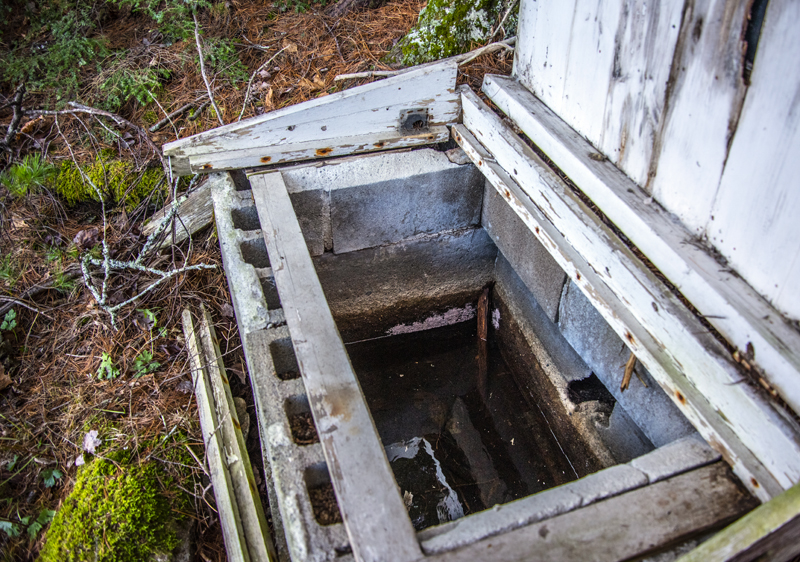 The Weston Memorial Spring was a source of “crystal-clear water” in the 1940s, but the water and the ground around it had become contaminated by the 1960s. (Bisi Cameron Yee photo)

Things have changed since the idyllic days that live in Berger’s memory.  By 1966, according to the minutes of the first annual meeting of the Biscay Pond Association in August of that year, the condition of the drinking water from the well was described as “deplorable.” And in 1976, during the annual meeting of the Pemaquid Watershed Association, it was decided that signs were to be posted at two camps suspected of contributing to the pollution of both the spring and Biscay Pond, stating that the camps could no longer be occupied “until plumbing regulations are met.”

Hanly remembers when it became general knowledge that the spring was contaminated. “There was less concern and understanding regarding septic systems in the 60s and 70s,” he said.

The spring no longer had a purpose — it no longer provided a source of safe drinking water for the households on Biscay Pond. Residents no longer had a reason to visit the spring and many people in Bremen are no longer aware of its existence. But the Weston Memorial Spring still has an important role to play as a valuable section of wetland in a place where development has compromised the integrity of the water’s edge.

By 2018, the town of Bremen was fielding questions regarding selling the Weston Memorial Spring property. In September 2018, the Bremen Conservation Commission wrote a letter to the town, outlining the changes that have impacted the health of the area and the importance of retaining the gift of the spring. 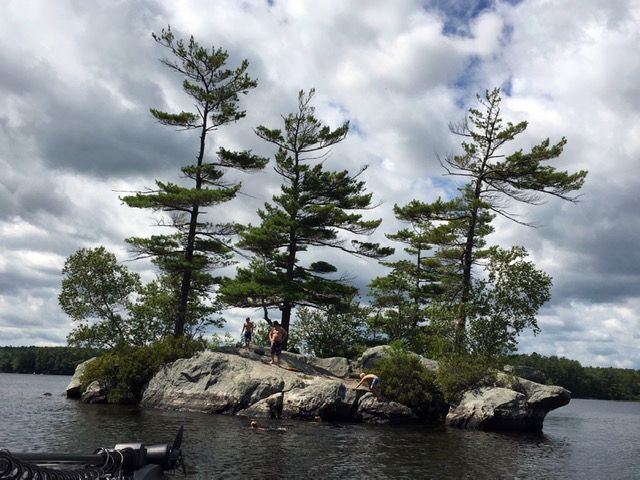 “The shore land properties have created lawns, roads, straight pathways, impervious driveway surfaces, and worse … that cause runoff directly into the pond. … Structures have been built too close to the water. Natural buffers on adjacent properties have been removed. The Weston Spring property is helping keep non-point soil pollution from running directly into Biscay Pond. The precious strip of natural buffer is using its native vegetation to help filter storm water runoff from adjacent properties.”

In a phone interview, Bremen Selectman Hank Nevins said he thinks the spring should be sold to its abutting neighbors with a provision that the natural character of the land be protected, and the money from the sale could be donated to the Coastal Rivers Conservation Trust to purchase “a better piece of land.”

According to Nevins, the spring was tested last year and remains polluted. “The soil is so bad the trees are becoming rotten and dying,” he said.

Trees have already been taken down at a cost to the town of up to $1,000 per tree, and several more are threatening adjoining properties, Nevins said. 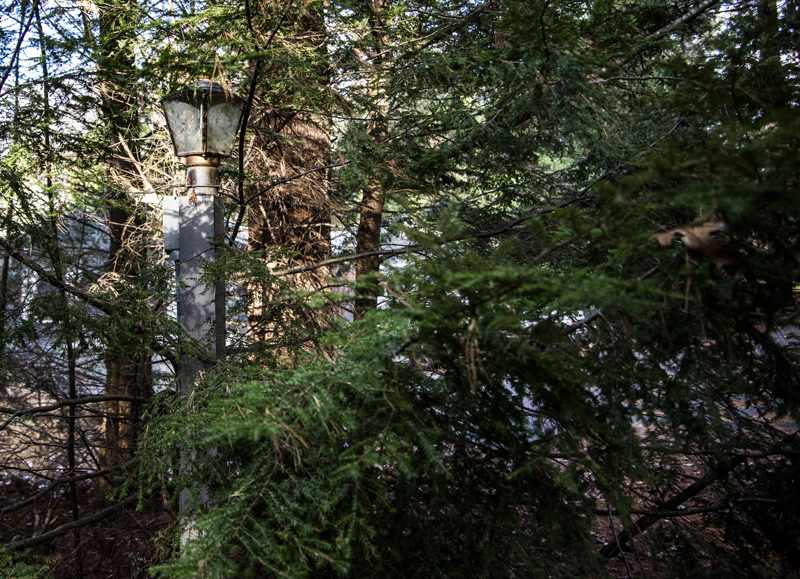 An overgrown lamppost stands near the Weston Memorial Spring in Bremen on Nov. 18. The property was donated to the town in 1926 “so that said spring and land surrounding and leading to it may always be open and free to the use of the public,” according to the deed. (Bisi Cameron Yee photo)

“If the water wasn’t polluted and the property had a good trail, it might be a different story,” said Nevins. “It’s just a mess. And nobody uses it. Nobody even knows it’s there.”

The spring has been an unresolved issue for the town far longer than the 22 years Nevins has served as a selectman. He thinks the town should at least determine whether it can even sell land donated as a memorial in perpetuity, and how to enforce any stipulations — both questions for the courts which could involve substantial legal fees.

Ultimately, the matter is up to the town, Nevins said. “It has to be put in front of the people.”

Berger is passionate about the fate of the Weston Memorial Spring property. “Maybe it’s not just a memorial for the Weston spring but a memorial to remind us that we’ve been careless with our fresh water,” she said.

She hopes the original intent of the land donors will be honored — that the spring will be preserved in perpetuity. She envisions a slim path leading past the covered well down to the water, perhaps a bench where town residents can enjoy the view. She hopes that paddlers will be able to pull in and rest there. She hopes neighborhood kids can still use it as an access point to swim to the two islands. She hopes residents of Bremen will always be able to walk down the tumble of moss and grass and natural vegetation to the spot where they can see the islands just offshore and feel the sense of peace that emanates from that one small natural strip of land.

“I wish there was a way to bring it back,” said Hanly.