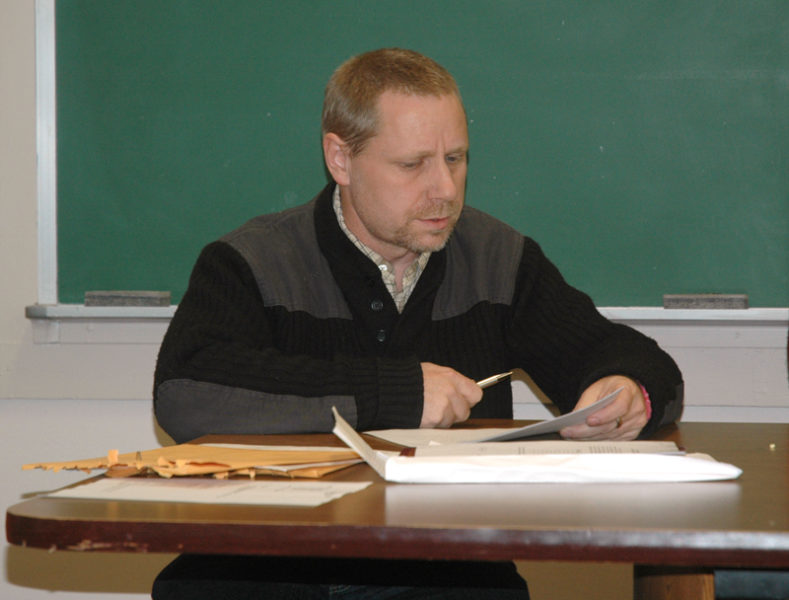 Bridge engineer Eric Calderwood, of Calderwood Engineering in Richmond, opens bids for the Heath Road bridge project during a meeting of the Bremen Board of Selectmen. (Alexander Violo photo)

The Bremen Board of Selectmen opened six bids Wednesday, Dec. 15 for the construction of a new bridge on Heath Road over Smelts Brook, but voted not to award the project to any of the bidders, citing unexpectedly high bids.

The board decided to request bids again after it makes changes to the project to lower costs.

According to Selectman Hank Nevins, the board estimated the cost of the project at approximately $450,000, and has access to roughly $469,000, including grant monies.

Bridge engineer Eric Calderwood, of Calderwood Engineering in Richmond, suggested sitting down with Atlantic Mechanical and working to cut costs.

“We can potentially sit down with Atlantic Mechanical and their suppliers and see if there is another option,” Calderwood said.

He said a similar negotiation strategy had been employed during a past bridge project in Orrington, between the municipality and Sargent Corp., of Stillwater.

Selectman Boe Marsh said he favored discussing the matter further to see if the total cost of the project could be significantly lowered.

“We definitely have to go back to the drawing board. That price is a huge surprise. At these levels, it’s just an impossible project,” Marsh said.

Nevins said the project is time-sensitive, because in order for the town to receive grant funding, the project needs to be complete by September 2017.

“We need to make a decision in the next couple of months or the project will have to be moved back a year,” Nevins said.

Calderwood said it may be possible to get the deadline for the grant funding extended in light of the circumstances.

The engineer said an accelerated construction schedule is another possible way to curb expenses, but cautioned that the condition of the bridge’s existing abutments may make that strategy unfeasible.

Nevins said one way to lower project costs would be to build the new bridge about 20 feet upstream of the existing bridge, which would remove the need for a temporary bridge during the construction process.

If the town decides to move the bridge, Nevins said the town might have to use eminent domain to take land for the upstream construction site, as the property owners, in the past, have not been open to selling the land to the town.

“If we are able to eliminate the temporary bridge, that may be sufficient,” Calderwood said.

However, in past meetings and public hearings, Heath Road property owners have indicated their desire for the new bridge to be in the same location as the existing bridge.