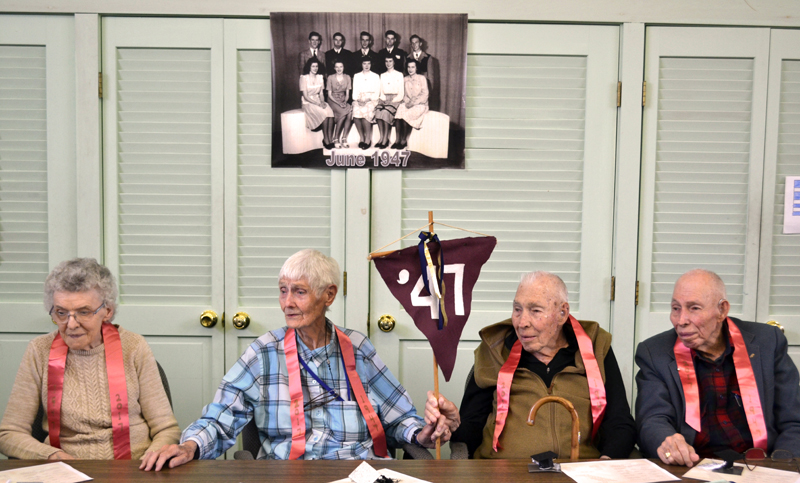 From left: Bridge Academy Class of 1947 members Pearl Golden, Barbara Shorette, and Alan and Philip Alexander sit underneath their class photograph during their 70th reunion at Bridge Academy in Dresden on Saturday, June 17. (Abigail Adams photo)

Long walks to school through inclement weather, pranks played on a teacher, and the principal’s new Model T Ford were among the memories shared by the four surviving members of the Bridge Academy Class of 1947 during their 70th reunion at the former Dresden high school Saturday, June 17.

“It was a whole different world back then,” said Barbara Shorette, salutatorian of the class of 1947.

Four hundred and thirty students earned their diplomas at Bridge Academy when it was a high school from 1890-1966, according to the Bridge Academy website. The building now serves as Dresden’s public library.

Bridge Academy previously held general reunions of graduates, but they were discontinued, said Terri Blen Parker, daughter of 1946 graduate Harold Blen and Mary Blen. The tradition was resurrected last year with the 70th reunion of the class of 1946.

There were 10 graduates in the class of 1947. Seventy years after graduation, twin brothers Alan and Philip Alexander, Pearl Trussell Golden, and Shorette reunited Saturday to remember their high school experience.

Golden and Shorette were close friends, spending all 12 years of grammar school and high school together. “We had our little secrets,” Shorette said.

Barbara’s nickname for Pearl was “Pig Pen” and Pearl’s nickname for Barbara was “Barnyard.” They used to write notes to each other during class and sign them with their nicknames, which they thought no one else knew, even though everyone did, Shorette said.

During their time at the Cedar Grove grammar school, Golden was the janitor, Shorette said. Shorette used to have to lift Golden up so she could unlock the door to the school and start a fire in the wood stove before school began.

Golden laughed at the memory. “You were able to lift me up?” she said.

The two would also haul water from the spring for the school. “We had to hustle to get there on time,” Shorette said. 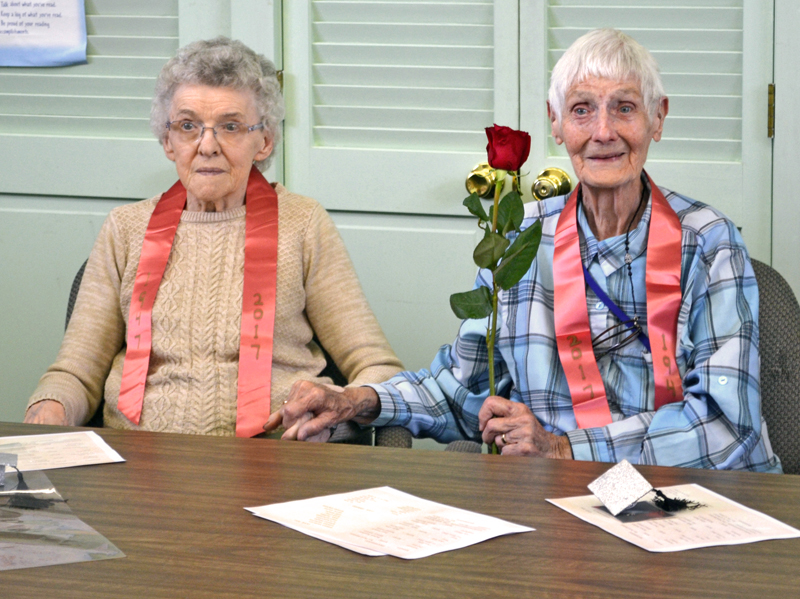 Pearl Golden (left) and Barbara Shorette reminisce about their 12 years in school together during the Bridge Academy Class of 2017 reunion Saturday, June 17. (Abigail Adams photo)

Harold Blen used to shovel coal at Bridge Academy to heat the building for school, but the school switched to oil heat in 1944 or 1945, he said.

Cars were rare in those days and school was never canceled regardless of the weather, Shorette said. “We just walked through it,” she said. Students also traveled to school by horse-drawn buggy or sleigh.

The rest of the students used to “travel by shanks’ mare,” an old-fashioned term for walking, Philip Alexander said. “If I wanted to go to Gardiner, there would be no problem, it would just take me all day,” he said.

The class of 1947 was one of Bridge Academy’s largest, even though most of the students dropped out, Philip Alexander said. The class began with more than 30 students, but only 10 graduated, he said.

Drop-out rates were high in the post-World War II era, Philip Alexander said. He remembered a physics class Principal MacComb held in the corner classroom in Bridge Academy, pointing to the room in the library. Almost a dozen students crammed into the classroom for the first class; by the end of the week there were only five. 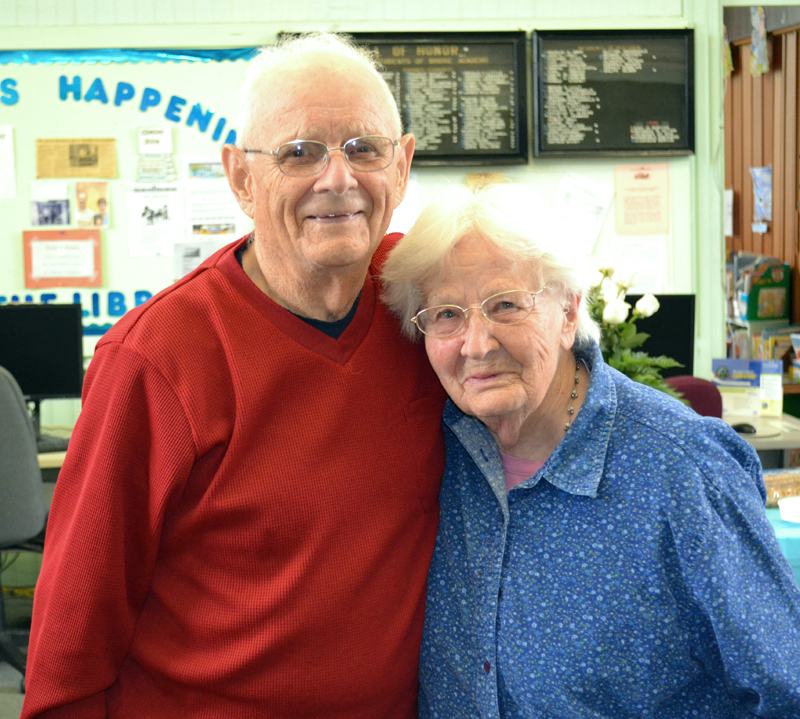 Bridge Academy Class of 1946 members Harold Blen and Eleanor Everson attend the 70th reunion of the class of 1947 at Bridge Academy in Dresden on Saturday, June 17. (Abigail Adams photo)

Shorette used to struggle with math, but Alan and Philip Alexander helped her with the assignments, she said. During their senior year, Shorette and Roberta Knowlton used to study together every day in competition for the title of valedictorian.

At the end of the year, Knowlton was named valedictorian, beating Shorette by three-tenths of a point.

Principal MacComb, the successor of Mr. Lord, whose picture hangs on the library wall, “ran a tight ship,” and students were not able to get away with much, Philip Alexander said.

The Alexander twins “were too good to get away with anything. We got away with a lot,” Shorette said.

The students at the school got along and there was no fighting or bullying amongst them, Shorette said. However, there was one teacher in particular, who moved to Maine from New York, that students used to “have some fun with,” she said.

The teacher didn’t know the difference between a pine tree and a birch tree, and didn’t believe students when they told her the lower Kennebec River was salt water, not fresh water, Philip Alexander said. 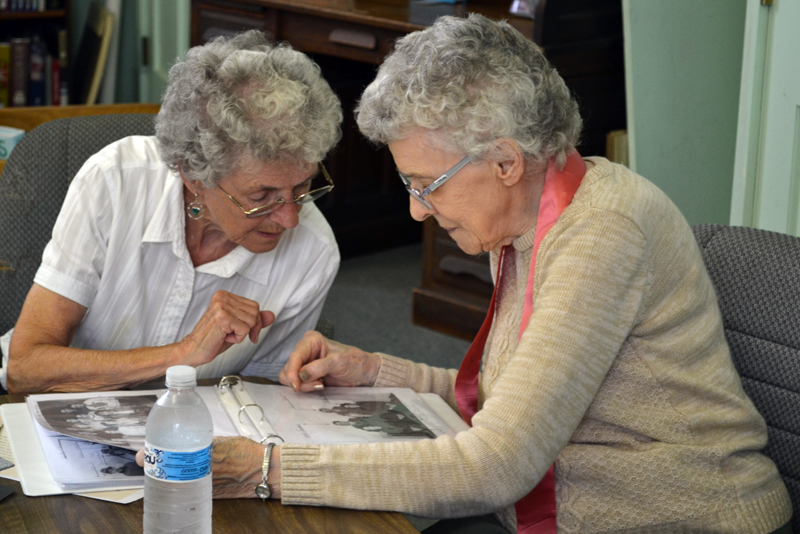 One time, the students convinced the teacher to take a toboggan ride down a hill with a ski jump, Shorette said. “We were never mean to each other, just sometimes to her,” she said.

School plays, speech contests, May Day celebrations, and sneaking out to the river to play on the ice were all part of the high school experience at Bridge Academy in the 1940s.

Alumni from the class of 1947 and surrounding years flipped through notebooks of old photographs and talked about memories that were still vivid after 70 years.

The reunions will hopefully continue, Parker said. “This is a friendly group of small-town kids that didn’t want to let go,” she said.