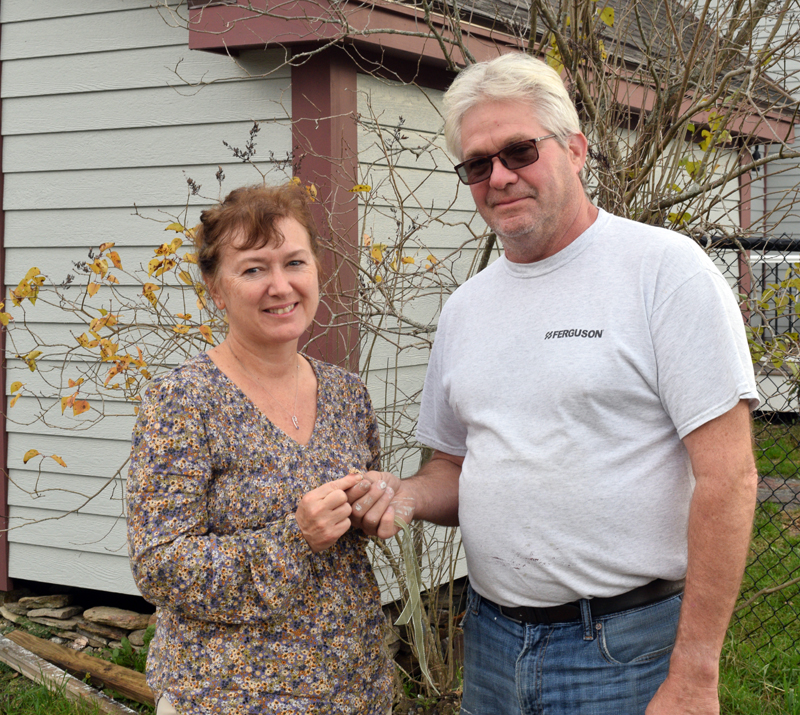 Jeff Pierce hands off a 1958 Bridge Academy class ring that is suspected to have belonged to Hazel Moody to Hazel’s daughter-in-law, Sherry Moody, at his Dresden home on Nov. 1. Pierce found the ring by chance underneath a lilac bush after moving the bush several times during renovations. (Evan Houk photo)

After nearly 64 years, a pristine 10-karat gold 1958 Bridge Academy class ring belonging to Hazel Moody (née Robbins) has made its way home to the family of her son, Daniel Moody.

For the past several years, Jeff Pierce has been in the process of renovating his home, which was built around 1780, on Gardiner Road (Route 27) in Dresden. This past September, after moving a few lilac bushes three different times during the construction, Pierce happened to kick a clump of dirt from underneath a bush and discovered a shiny object.

“This bush has been moved a gazillion times, by three different excavators,” Pierce said during an interview on Nov. 1.

After washing it off with water, Pierce’s son recognized that the ring was from Bridge Academy, a school built and founded in 1890 as a free high school for Dresden’s youth. Bridge Academy was a school until 1983, when it transitioned to become the Bridge Academy Public Library.

The ring was in excellent condition and emblazoned with the initials H.R.

“If you look at the ring, it’s pristine. There’s no wear marks on it,” Pierce said. “So she must have lost it right off.”

Pierce then contacted Shari Lily, a lifelong Dresden resident, to ask whether she knew who graduated from Bridge Academy in 1958 with the initials H.R.

Lily realized that Hazel Robbins, who later took the married name of Moody, was the only person with those initials who graduated around that time.

Hazel Moody died in 2006. Pierce decided it would be the right thing to return the ring to Hazel’s family, her son and daughter-in-law, Dresden residents Daniel and Sherry Moody.

Sherry Moody is a member of the Bridge Charitable Trust, which was founded at the same time as the school and carries on the work of helping Dresden’s neediest residents. 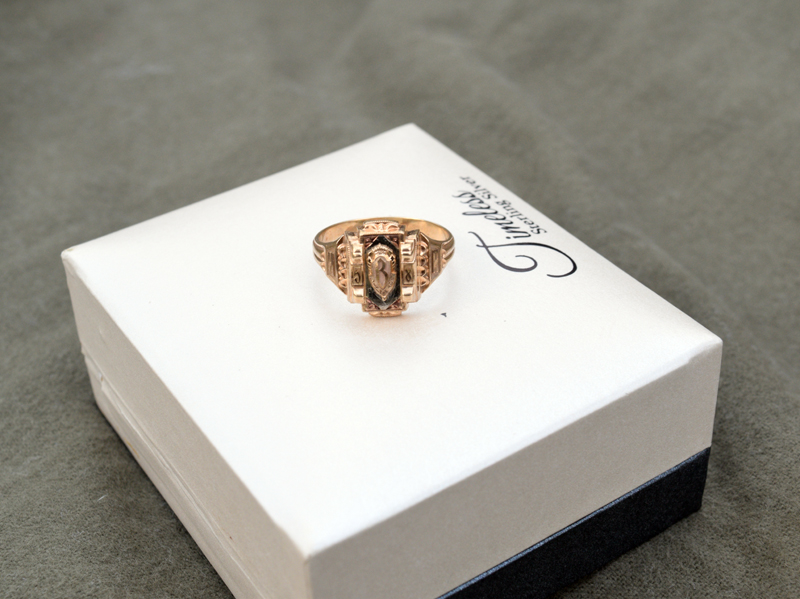 A “B” is visible on a 10-carat gold 1958 Bridge Academy class ring that Dresden resident Jeff Pierce found in a clump of dirt outside his house in September. Pierce discovered that the ring likely belonged to Hazel Moody and returned it to her surviving relatives. (Evan Houk photo)

“It felt lucky,” Moody said of the ring being returned.

She said no one ever heard a story about Hazel missing her class ring, but it makes sense that it was hers. Hazel spent much time at what is now Pierce’s residence when it was a Texaco station owned by her brother, Richard “Dick” Robbins. The house is next to Dresden Takeout, where the Texaco station was until the early 1960s.

“I’m sure she stayed here a lot when her brother lived here,” Moody said.

The summer kitchen window was replaced during Pierce’s renovations and they suspect that the ring may have fell from there into the soil of the lilac bush.

“All we could figure out is she must have been doing dishes or something. Or she put it up there and the cat knocked it over,” Pierce said. “It was right where the summer kitchen window was.”

Another coincidence Pierce mentioned is that Hazel Moody worked for the town of Dresden as tax collector and town clerk for several years until her death in 2006. Pierce’s wife, Ann Pierce, currently works at the Dresden town office, across the street from the couple’s house, as tax collector.

Pierce offered some more history of his house. He said it was an inn from about 1880 to 1910 and then served as an orphanage through the Great Depression.

Daniel Moody graduated from one of the last classes at Bridge Academy, before it closed as a school in 1983, Sherry Moody said.

Sherry Moody says her plans for the ring are to “keep it safe, share it with the family.”

“It will be handed down to Hazel’s grandkids eventually,” Moody said.