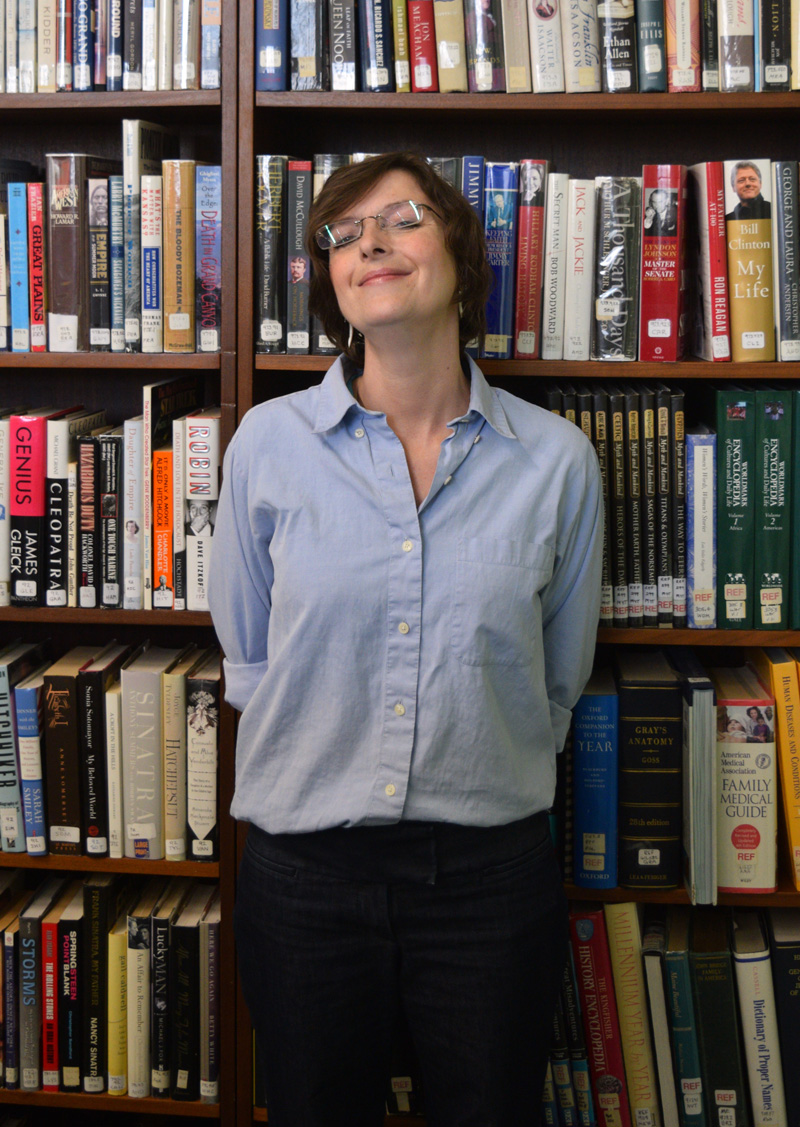 Emily Elliott officially joined the Dresden community as the librarian at the Bridge Academy Public Library on Aug. 31.

Located at 44 Middle Road in Dresden Mills, the library’s history is nearly as central to the Dresden community as the building itself. Built and founded in 1890 as a free high school for the town’s youth, the building was used as such until 1983. A year later, Bridge Academy trustees reestablished the building as a public library.

While Elliott grew up in Nobleboro, she was never far from the library. She attended Wiscasset High School with many students from Dresden, graduating in 1997. She even took oil painting lessons in the library basement when she was young.

She later earned a degree in business from the University of Southern Maine in 2005 and went on to work as a freelance writer and in social media marketing for several years.

She is a passionate photographer, writer, and reader. Elliott started reading literature at a young age, and libraries were the way that she accessed texts she couldn’t find anywhere else.

“I learned about interlibrary loan and what a boon they are to their communities and how the future of libraries is really being the community center… it really nourishes the community, so I wanted to be a part of that,” Elliott said.

Bridge Academy is very much a community center as much as it is a library, and it attracts all sorts of individuals from the greater Dresden region. The complex features four public computers, high-speed wireless internet access, basketball courts, and a much-used pickleball court.

“We have one really cool lady who’s reading to her grandchild over Zoom, so she comes in and checks out a stack of kid’s books and she takes them home… so she’s using our library’s resources and it’s helping the literacy of her granddaughter,” Elliott said.

Library trustee president Rick Graffam was especially excited by Elliott’s experience with grant writing, a skill sorely needed at Bridge Academy, an old and much loved building that never ceases to generate new expenses, be it for wiring, a well, or an elevator.

“Not everybody is experienced in grant writing. It’s a specialty field that there aren’t many specialists in,” Graffam said.

Previous librarian, Amalia Farel, who joined the library in February, left the job in July to travel around Europe with her husband and live closer to her family. Graffam said that she was an outstanding librarian who had loved getting to know the Dresden community.

“She went above and beyond,” he said.

Despite the loss of Farel, Elliott said she is continuing to build up her ranks of volunteers to work in the library and the used bookstore.

The bookstore, located in the library’s basement, is stuffed to the brim with books, so much so that volunteers are practically giving them away at $5 a bag.

This is partly due to consistent book donations, but also because Elliott and volunteers keep things fresh with a rotation of new literature shuffling through the shelves, into the basement, and, if all else fails, a free shelf at the local transfer station.

Elliott isn’t the only thing that’s new to the library; with the help of Mary Walsh and Nate Kenyon, trustees of the Kenyon Fund, the children’s room was completely updated and refurbished.

The Kenyon Fund was established in 1981 in memory of David and Pamela Kenyon, who were very involved in the Dresden community. The fund is dedicated to supporting access to the arts and music for children and students.

“The Kenyon Fund fit with our charter perfectly,” Graffam said.

Bridge Academy Trustees also support students from Dresden with a variety of scholarships to support higher education and trade school expenses every year.

Graffam said that the next order of business for the library will be replacing the tall windows on either side of the building’s large common area, which he suspects haven’t been replaced in over a century.

The library is open from 2 to 7 p.m. Tuesday and Thursday, as well as from 9 a.m. to noon on Wednesday and Saturday.

In line with the library’s community values, Wednesday morning hours are a recent addition following feedback from parents who decided to homeschool their children this year and wanted to see more family programming in the children’s room during the week.

“It’s a really wonderful community, I’ve met a lot of really awesome people, and I couldn’t be happier to be on board,” Elliott said.

To volunteer, donate, or learn more about the Bridge Academy Library, go to bapl.us.